I am a senior in high school. Since the beginning of this year I’ve held a part-time job, and put most of my money into a savings account. I’m going away to college in the fall on a partial academic scholarship, and my parents and I decided it would make sense for me to work now and save everything so when I go to school I can focus on my studies, and still have some spending money. We don’t have a lot of money, so maintaining my scholarship is really important to me, and to my parents. END_OF_DOCUMENT_TOKEN_TO_BE_REPLACED

I am a second-semester sophomore at college. To save money and make life easier for my parents, I am attending the college in our town and living at home. It’s been a lot of fun and with one exception has worked very well.

My parents are Democrats. END_OF_DOCUMENT_TOKEN_TO_BE_REPLACED

I am concerned about my 80 year old father. He’s a widower, and the last of his siblings. When he was younger he was a force to be reckoned with—one of those strong, confident Mad Men sort of businessmen—but he’s been retired for a while, and has lost touch with a lot of his old contacts thanks to time or their passing. He doesn’t go out much, and so he doesn’t really take care of himself. He never shaves, he has crazy-man hair, his clothes don’t fit and he’s got dirt caked under his fingernails. I feel like he’s just not concerned about his appearance any more. END_OF_DOCUMENT_TOKEN_TO_BE_REPLACED

I am struggling to manage my household, and feel like I am failing miserably. END_OF_DOCUMENT_TOKEN_TO_BE_REPLACED

My sister, “Cindy” is driving me out of my mind. She is so irresponsible.

A year and a half ago we celebrated my father’s 90th birthday. My sister lived in another part of the country, so she took some time off work and came home, staying at our parents’ house as she always does. The day before she was ready to leave, Daddy died of a heart attack. END_OF_DOCUMENT_TOKEN_TO_BE_REPLACED

My Uncle and I went to a pub the other night and had a great time. The beer and the food were great. We laughed a lot. I spent the night thinking, “yep, that’s my uncle.” END_OF_DOCUMENT_TOKEN_TO_BE_REPLACED

Right now, I am in a heated battle with my weight. It’s crept up, a little over a pound a year. When I got married thirteen years ago, I was twenty pounds lighter. Twenty pounds! My husband recently mentioned he was concerned about the weight I’d put on. Like there’s a woman alive who doesn’t realize she’s gained weight. END_OF_DOCUMENT_TOKEN_TO_BE_REPLACED

US: Given what’s going on in the world, the Bartender and the Priestess wanted to step away from our regular status format and talk a bit about the Syrian refugee crisis. END_OF_DOCUMENT_TOKEN_TO_BE_REPLACED

I’ve been dating my boyfriend for a little over a year now. I’m crazy about him, but sometimes I don’t think he feels the same way about me, that he’s sending out mixed signals.

He’s always asking me about my friends, especially if they’re guys. Like, I have to account everything I do to him. He’ll drive past my house or come to the front door unannounced; sometimes, I feel like he’s trying to catch me with someone else.

The last time he cruised my door he saw me still in my car. It was midnight and I had come home late from the gym. I was sitting in my car listening to music and surfing the internet. He stopped his car in front of mine and demanded to see what was in my gym bag; he thought I was on my way out to see someone else. The only way I could get him to ease up was by opening my bag and showing him my sweaty gym clothes.

My boyfriend has a rocky track record with relationships, and he said he was hurt badly when both of his marriages ended in divorce. So he won’t come out and say I’m his girlfriend, because of the way his other relationships ended. I don’t know what to do. I love him so much, but a part of me thinks I should end things. I don’t know how to read him. Can you offer any advice?

We don’t think we’ve ever done a question with a theme song before. But let us just say it’s not “Slow down, you move too fast now.

Nope, it’s more a screaming version of “You gotta get out of this place.” Now. Stat! You are in danger.

P: There are no mixed signals here, although you seem to be under some confusion about what constitutes good boundaries in relationships. You say, you don’t even know if you’re in relationship, and he’s stalking you (did you hear that, he’s stalking you, driving by your apartment more than once an evening) and demanding you show him your gym bag? No one has the right to look in your bags. Does it seem thrilling that he’s possessive? It shouldn’t. It’s a sickness on his part. Your property is your property. His wanting to see it is his wanting to control you. You are a woman, all that language about belonging to one another is seductive and wrong-headed. You belong to yourself.

B: If you find his possessiveness thrilling, or even acceptable, then it’s a sickness on your part, too. You ought not to be subject to his demands, and allowing him to show up (my guess is, when he’s at your door unannounced, you always let him in), tell you what to do (re: gym bag), and harangue you until you comply tells me your own identity is compromised. So many of us spend so much of our time expecting someone else to make them “complete” (whatever that means), and there’s all these pauncy stories and songs and rom-com movies about finding That Certain Someone who is the other half that creates one glorious whole. I kinda blame Plato for that nonsense (and, indirectly, for those rom-coms), but here’s the thing. What it ultimately does is allow a person to relinquish ownership of his or her own life, thinking he or she can’t fully self-actualize until that other person comes along. Which is completely misguided logic, if you spend a minute thinking about it. And which leaves you open to someone else stepping in and trying to take ownership of your life, by checking up on you at all hours and demanding you present the contents of your gym bag.

P: This is already an abusive relationship. I’m not going to focus on him, because he is not looking for help. He’s already had two “failed relationships,” poor thing… I’m sure he thinks neither of those failures were his fault. I hope your writing to the Bartender and the Priestess means that you are looking for help and a way out. Because the abuse will only be repeated and it will only escalate. You are in danger. Please.

B: Seriously. If you’re writing to us trying to figure out how to save this, I’m happy to say you won’t find that here. You mentioned his two failed marriages; has he laid on you the trip that “he doesn’t know how he can trust again, those two other women really hurt him”? Because if he did then let me help you refine your response (and start teaching you boundary definition in the process). Your response should have been, “Well, you seem like a really nice guy but you really need to get over that sort of internal anguish. I hope you get the help you need; call me when you’re more healthy.” Your response should NOT have been, “Let me prove to you that not all women are bad!” My guess is, you chose response #2, thereby taking on the burden of his past injuries and making them a factor in your role as his girlfriend, instead of pointing him toward something healthier.

P: Right now, you’re collaborating with him. If you know he drives by, why are you sitting outside? Sadly, in today’s world, it’s dangerous enough to be a woman alone at night in most cities that you don’t want to do it. But with this particular man, you’re courting trouble. Why? What do you want? You don’t need him to prove he loves you, you need to learn to love yourself.

B: He’s not mixing his messages. He’s pretty declarative, in fact. He’s saying, over and over, that you belong to him, even without giving you the official title. He’s saying that what’s yours–including you–is his. In two years, or five years, or six months or three weeks from now, when you’re sick of his BS and you refuse to open your gym bag because you just don’t feel like it, and he hits you in response, will you say that you never saw this coming? Because it’s written all over every aspect of his behavior toward you. A mixed message is, “He says he really likes chicken but he rolls his eyes whenever I make it.” It’s not, “He’s demanding to see inside my gym bag and will fly off the handle if I don’t give it to him.” That’s, actually, pretty obvious. And the lack of title is another tactic often used by abusers; they keep you needy and attached by keeping you off-balance. Again, obvious. And you need to back away. You say you’re crazy about him, but don’t give one single example of why. You only talk about his erratic behavior. Your gut knows what you should do, even if your head doesn’t want to come to terms with it.

P: Should you abandon ship? If there’s a ship at all, it’s a prison ship in dangerous waters. Please get out. You can learn about good boundaries some other time. First ensure your safety. You are worth so much more than this man. I promise you. If you need help leaving, or even considering how to leave, call the National Domestic Abuse Hotline – 1-800-799-7233 or go on line to http://thehotline.org Call them now. Save yourself. You’re the only one who can. 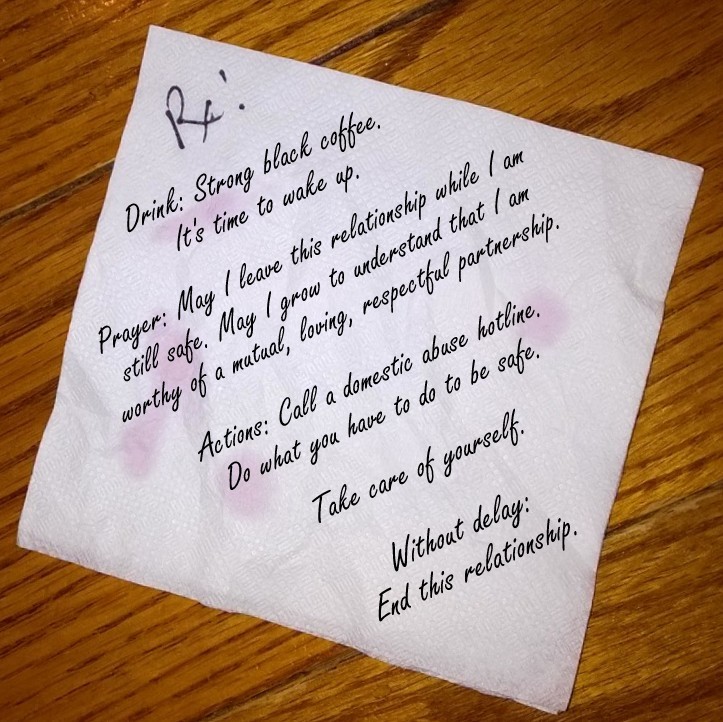 END_OF_DOCUMENT_TOKEN_TO_BE_REPLACED

Dear Bartender and Priestess: For the last ten years I have been married to “Shaun”. We’ve both been married once before. Shaun and I get along well and like many of the same things, so courting seemed easy. It wasn’t long after we were married, though, that he informed me we were going to split every expense exactly down the middle. Everything, 50-50. END_OF_DOCUMENT_TOKEN_TO_BE_REPLACED