I am a second-semester sophomore at college. To save money and make life easier for my parents, I am attending the college in our town and living at home. It’s been a lot of fun and with one exception has worked very well.

My parents are Democrats. They’re not just great-hearted policy liberals they are staunch, wild, my way or the highway kind of Democrats. My older brothers, who all live in the area, are exactly the same. Nothing’s more fun than casting stones at the opposition! So what’s the problem, you ask?

Well, my boyfriend is a Republican. They “tease” me unmercifully and call him names when he’s not there. If I have him over for dinner, they mock him to his face. It hurts him, and it certainly doesn’t give him a great opinion of Democrats. “See,” he says, “See, that’s what they’re all like.”

The other thing? I’ve been taking nothing but finance and poli-sci courses since I got to campus. I’m a Republican too. And now I have this amazing opportunity this summer to work for a state senator. It’s a dream job. My parents would think it’s a dream job too, except that it’s for a Republican. He’s a good man! But that won’t matter to them.

I’ve avoided bringing up my newly-embraced party affiliation to them. I know it’s cowardly, but I have to live here. I can’t afford to go to school if I don’t live at home. I don’t like living with all the shouting and ugliness. So…Help! Where do I go from here?

P: Oh, dear… This is going to be a challenge, isn’t it? First and foremost, and easiest, I think you should stop asking your BF to dinner. Although you should be able to invite your friends over and have them be welcomed, that doesn’t seem to be the case. Make clear to him that you’re doing this because you care for him and not because you’re giving up on the relationship.

If one of your brothers is an easier touch for you, you might be able to say to him, not when you’re being what they probably think of as “teased,” but when you’re alone, “I don’t know whether you understand exactly how much it hurts me when you name call and humiliate this guy I care about. I don’t feel safe and I don’t feel that my friends are welcome in my home.”

Maybe he can hear the pain and stop because he loves you. He might then be able to de-escalate what goes on with other brothers.

B: You’re nicer than me. I really want her to confront her parents. I get that it’s a difficult thing to do, but they—and they messages they’ve sent to their other children—are causing our letter writer pain. I don’t think she will make any progress trying to back-door-wrangle this situation. Her entire family is causing her anguish and behaving in an insulting and derogatory manner towards someone she brought to them. Someone has to start acting like an adult here and instill manners. I’m afraid that’s up to the letter writer.

P: I want her to confront her parents; I just want her to develop an ally at home FIRST, if possible. If you can talk to either or both of your parents, you might mention in a non-confrontational way, that you’re confused. Supposedly, they taught you to be open and welcoming of everyone. What does it mean that they’re willing to accept immigrants but not their neighbors? You might lay it on heavily and say that you’re sorry, but you hadn’t realized that you wouldn’t be able to bring people to the house who were different from the family. And say something along the lines, “I’ve told him, that it’s not fair to him to ask him to come to a home where people are mean and hostile towards him.” Tell them the truth, that you respect this guy too much to allow anyone to bully him and that it hurts too much to see the parents who talked to you about inclusivity be so mean.

B: Where does the letter writer say that her parents talked to her about inclusivity, or taught her to be open and accepting? She doesn’t say that anywhere. In fact, she said they’re “My way or the highway” as far as politics are concerned. Which is inherently exclusive. And damaging. As we have proof, written above.

P: I’m holding fast there, Terri. I’m sure they talk easily about accepting all sorts of people. It’s part of the party platform. My guess is if she came home and said she were gay, they’d be all, oh, wow, look now you can get married. They’re not willing to accept anyone outside their norms — but things are hard because they probably actually think the ARE inclusive.

Now you knew that we would get to this — the boyfriend, while his presence in your life exposes uncomfortable truths about people you love, is really only a sign of what the deeper problem is. It seems that you don’t live in a house that accepts you. That’s a crying shame.

B: Much of the time—not all, but much—children continue the affiliations they were raised with. They keep the same religion, the same political ideology, the same diet, even. It’s what people know, and it’s an easy way to define one’s world. The problem comes in when a kid rejects an affiliation. Think about what the gay kid coming out to her or his parents goes through. I mean…I’ve seen fights break out over an adult child’s decision to embrace vegetarianism (Parents: But what will you EAT? Kid: My vegetables.) I had my own moment with my family when they realized I had given up the religion I was born into. And for you, your decision to switch political parties—it feels right to you, doesn’t it? For you, it makes sense. But for your parents…if it’s how they define their world then it’s also partly how they define themselves. Your defection to the other side is also a rejection of them and who they are. I’m not saying this perspective is the correct one to have, because you’re not rejecting them. But a lot of people take this sort of thing incredibly personally, which is why I think they’re so hostile towards your beau from the very beginning.

P: Presumably you’ve tried the yelling back thing and that hasn’t worked too well. It never does. It just gets everyone all roiled up. If you want change, you’re going to have to be the one who changes. You’ve got things you want to do; you don’t want to spend college simply reacting to their judgmentalism. And you don’t want to become judgmental from the other side. Nothing good comes of that.

However, now you’re going to have to make some hard decisions. Are you willing to live in a house where you’re not accepted? Your quick response might be, “but they’re paying for my school and I can’t afford it any other way.” That translates to “Yes, I’m willing to live with this.”

B: And in your case, that’s a bitter pill and hard to not take personally. Because being made fun of, and having your boyfriend mocked, around the dinner table? That IS personal. Sometimes, people see things upside down. They think if you reject a value system that they believe in, you’re issuing a personal attack. But if they behave antagonistically toward you and someone you love, and make you want to leave the house, somehow, you’re not supposed to take that personally?

P: Some people aren’t willing to put up with this, and they will find a way to pay their own way through school. Sometimes they quit and find a full time job, and live incredibly frugally and skimp and save and get it done. How much do both your education and your self respect mean to you? You can’t have a conversation with your parents, if you don’t know what you’re willing to put on the line. Well, you can, but they don’t usually go well.

B: To be fair, and practical, the idea of the self-supporting college student is increasingly a myth. And even if she strikes out on her own and is fully independent, the way the student loan laws are written, she still needs to access her parents’ income tax records in order to get federal funding, until she is 24 or married.

P: There’s all of that, so if you can’t get an education appropriate for what you want to do without them, can you get some counseling for coping strategies? Because this isn’t going to work forever. Consider your options. Think about coping strategies; think about an exit strategy. Then talk to your parents, who actually may just be clueless about how hurtful they’re being with the boyfriend and with you. It’s not good to live where you’re completely disregarded.

Here’s the thing. Conversations like the one I’m suggesting take a lot of preparation and an absolute dedication to being calm and deliberate. This may be a series of conversations. It’s going to be a lot for them. I just Googled: How to tell your parents you’re a Republican! Of course there was stuff. If you let them see how you feel, let it be the pain, not the anger. Give them space to maneuver a bit. In your home, the anger is a tried and true tool for getting away from the point. Clarify what you want. Practice what you want to say. Start little. Don’t close any doors. But hold fast to your vision for yourself and what you’re willing to do to make your dreams come true. Don’t threaten them; just focus on your dreams.

B: And write a list of topics to cover. Don’t let the anger or pain or arguments or tears or name-calling get in the way of you making your point. If you’re going to intern for a politician, you may as well get acquainted with the idea of sticking to the determined talking points. This? Is what they are. Stay on point. Make your case.

P: You want your parents to support and love you. Even more than that, you need to love and respect yourself first.

Oh I hope this goes well, however rockily. Families are meant to keep growing. The chances are pretty good that they love you and want the best from you. It’s just that your best and theirs are a bit different. And good luck with the internship. 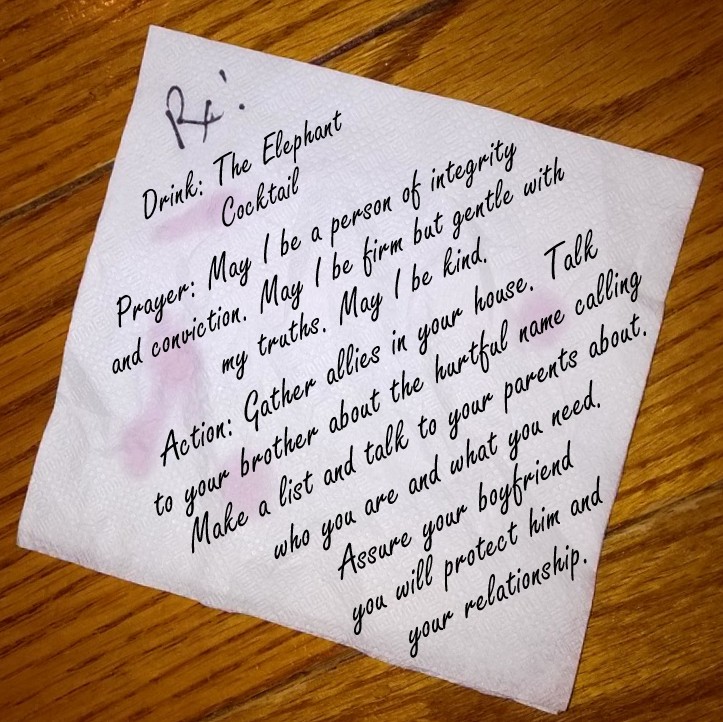