Dear Bartender and Priestess: For the last ten years I have been married to “Shaun”. We’ve both been married once before. Shaun and I get along well and like many of the same things, so courting seemed easy. It wasn’t long after we were married, though, that he informed me we were going to split every expense exactly down the middle. Everything, 50-50. He makes significantly more money than me, and I don’t begrudge him that, but he doesn’t even adjust what I should pay to account for our disparity in income. I moved into his house, which is in his name, and he won’t make me a co-owner on the deed because I can’t meet the equity he’s got. Instead, I pay him rent every month.

I am expected to pay my half on everything. He recently took his teenage son on a two-week vacation, and I couldn’t go because I couldn’t finance my end. When we go to dinner it’s Dutch. He sets spending limits on gifts and, if a gift I give him is of lesser value than one he’s gotten for me, he will return what he got me and get something at a lower price. He’s generous with his son and with organizations he cares about, but he clamps down with me. Of course, we hold no joint bank accounts or credit cards. That’s out of the question.

I’m paying off a large loan, but that’s projected to be completely paid off in two years, so at least that will loosen up my income a little. But he makes me feel like I’m less of a person, a second-class citizen or something. I know Shaun loves me, but he always puts everything else first–his son, his career, his tech gear, his public persona as a charitable giver. I’m practically living hand-to-mouth in his beautifully appointed home, generating cash for him to spend. Am I wrong to think that as far as he’s concerned, I am more of a servant and less of a wife?

B: You know, I think I need to have a bit of a lie down after reading this letter. There’s a throb, directly over my left eye, that isn’t going away. I am with Ann. I can’t find the comfort. I can’t find the other side of the story. This just seems…depressing. And an unreasonable way to want your wife to live.

P: You don’t say, and I don’t understand: What are you getting out of this? He’s getting rent and a half share on the expenses. Even the language, why isn’t your input just part of the cost of living together? I’ve known people who split expenses, but done that based on how much each person was making… and still… are you married or are you roommates?

You say he loves you? How do you know that? And more to the point, do you love him? Why? And what does I love you mean for either of you?

B: Exactly. I’m not seeing a whole lot of loving interest in this part of the story. It’s hard to hear someone say, “I know he loves me, even though I am the last of his priorities.” You might want to examine that. While the son will probably always take some kind of priority over you (and rightly so), at some point the career, or the tech gear, has to get bumped back to give you space to thrive. Because you’re not thriving, you’re barely surviving. God help you if he ever gets a dog.

Moreover, you make a point of saying that “it wasn’t long after [you] were married” that he instituted his 50/50 plan. Which tells me his pre-nuptial behavior was different. Perhaps there was some courting. Some spending. Some dinners or trips. Or, at the very least, no discussion of whether or not you were going to live in his house and have to pay him rent.

Rent. RENT????? Look, if you’re going to pay rent somewhere, at least let it be in a place in which you have some power. Like, in your own apartment. I can almost get around the idea that you’re not on the deed; it might not necessarily be a simple matter of adding a name to a sheet of paper, depending on the lending bank’s policies, and if you outlive him you’ll get the house anyway. I have to ask: What if you refused to pay him? Would he kick you out?

P: I think you need to figure out less where is he in the relationship, and more where you are. Why are you in this relationship? So far, I’m not understanding.

I don’t know how you think through these things, although I can say your last method wasn’t great, because it led you here to ten years with a balance sheet.

B: I would say she shouldn’t even worry about where he is in the relationship. In his mind, he may be the most relationship-positive monkey in the tree. For the moment (and only for the moment, as this is dreadfully uncharacteristic of me) I will assume that he’s not doing this because he’s on some weird power trip and that this is legitimately as good as he gets. He may think he’s the king of boot-straps and tough love, and his bean-counting is helping to build your character because after all…he worked for every penny he ever earned, so by gum… This may be his (deluded) logic. What you say at the heart of your letter is, his logic is bonkers. And, his best is nowhere near good enough in terms of making you feel loved, or valued, or that you’re worth anything more to him than as a roomie with benefits. Is that what you want to be?

Now that I’ve given one benefit of one doubt, let me return to my usual cynical self. I feel like he’s totally manipulative, and part of the reason he wanted you to be his wife is because he could wield financial control over you. Like he’s thinking, if you can hold your own, great, but if not…where the hell else are you going to go? It’s not like you’ve got the money to leave. Right? Does that ring true even a little? Then strategize an exit plan and work toward making it happen, because nothing will get better from that.

P: I think you know the answer to your first question. The real question is what do you want? Is this really a relationship you want to be in? Why? What are you getting out of it? (Go ahead, fill up your own balance sheet with pros and cons.) You may be willing to stay in this relationship for real reasons, but I’m not hearing them here. But go or stay you need to get all those things addressed.

People who see things in black and white, or in his case black and red, are not always easily engaged in conversations about change. But I think it’s valid to ask, are you?

But you can’t ask him to change until you know for sure you want to be there, and what you’re going to do when he says he likes life as it is. And why shouldn’t he? So far, yepper, you sound like you’re a roommate with bennies. What bennies are you getting?

B: I like the idea of filling out a balance sheet of pros and cons; it might be the only thing that makes sense to a person who’s caught up in bean-counting. The super-hostile part of me wants you to present him with a bill for any and all work done around the house. Do you cook? Do laundry? Vacuum? Mow the lawn? Spend your time grocery shopping? If he’s going to charge you to live there then part of me thinks you should charge him for services rendered. And then I’m exhausted by my own spite because seriously, sister. That is no way to live.

P: You do just sorta toss that I have a large debt thing in. Are the arrangements you’ve made based on your money handling in the past? Were these agreements you entered into knowing this? Which does change the question a bit. In that case, get out of debt and get some financial counseling. Actually, get some financial counseling and get out of debt. Sometimes they can help us think things through differently than we do, they know the options. Financial counselors are our friends, just like therapists are. At some point you may be able to involve your husband in this, if that makes sense, but not before you figure out how to move from your indebtedness.

B: To be fair, Ann, she also says she’s paying down the debt and projecting it will be paid off in two years’ time. It’s not as though she’s disregarding the debt or floundering through it in an “I can barely pay the interest” sort of way. Though it probably wouldn’t be a bad idea anyway to meet with a financial counselor, particularly if leaving is any sort of option.

P: That said, the house thing really bothers me. At what point do you live there? Is the house paid off? Are you paying him rent on a house he owns? That would be icky. If he dies before you, do you have to move? This is messy stuff. But it’s stuff you need answers to.

B: I may have come off as a little flip before regarding your rights to ownership if he dies before you do. You may want to look at his will and find out if he’s specified to whom his property will go.

Because too few of us learn these skills these days, either at home or at school, therapists are our best friends. They not only teach us to identify and ask the right questions, they help us figure out what to do with the answers, even when they’re uncomfortable.

B: For what it’s worth, if you do decide to leave it should be a relatively easy financial split, since you don’t have to worry about dividing out any accounts. Should you decide to stay, please bear in mind that you’re going to continue to fall to the back of his priority list, so you’ll need to be at peace with that or it will continue to tear you down and perpetuate your already-established feelings of second-class citizenry. Subsequently, figure out ways to make yourself, your own priority. Maybe you can’t afford a two-week vacation (right now); can you do a spa day? Or have a girls’ night? Can you take a class you’ve always been interested in? Or start working on The Great American Novel?

You can do all that with a loving and supportive partner, too. But making yourself a priority while you’re with Shaun might help you find direction and self-worth.

P: Really, please find yourself someone to support you in asking yourself the good questions. If he ever agrees to couple’s counseling, make sure he pays his half. [mic drop] 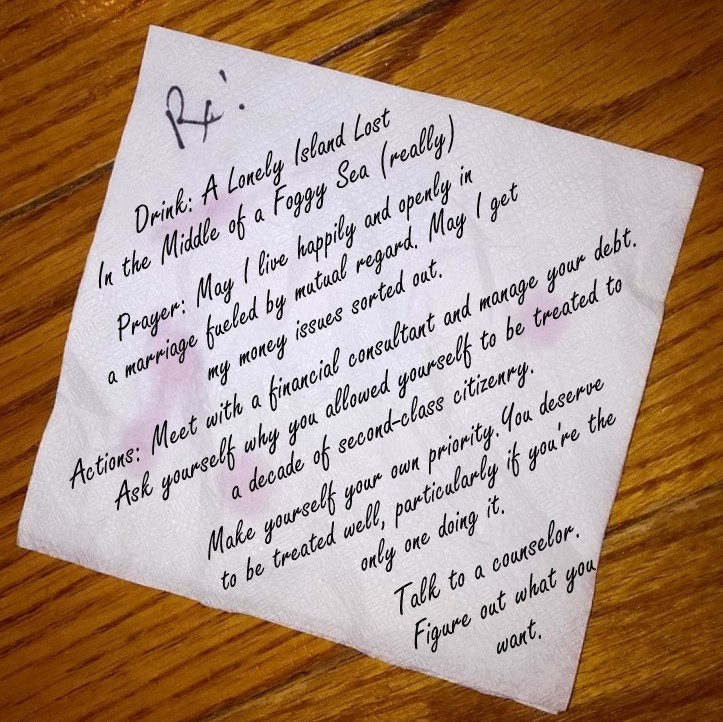