My Uncle and I went to a pub the other night and had a great time. The beer and the food were great. We laughed a lot. I spent the night thinking, “yep, that’s my uncle.”

And then we got home. I drove because he’d had a fair amount to drink.

When we get home, he produced a beer stein that he’d pilfered from the bar. (Did I mention that I hang out there, often?)

So we had a fight. Yeah, I probably should have waited until he was sober. But he’s a grown man and he stole a glass from a bar. It makes me furious. It’s stupid and disgusting. I confess I shared that opinion with him.

He thinks I’m prissy and stuck up. I think he could easily afford to buy the stupid mug (or the bar if he wanted to), so what’s the thrill? When you’re 50, why are you stealing beer mugs?

It was stealing when we were in college and guess what? Still stealing.

He wants an apology. I want the mug to go back to the bar.

Oh, great. Now the mug will not be going back because he just “dropped it” on my kitchen floor.

What do I do with him? How do I look at him with all the admiration I had just yesterday afternoon?

B: It’s always difficult to find out our beloveds have feet of clay, isn’t it?

So you and your uncle, out together, had a great night until you realized he likes to help himself to things. One of the main expenses any bar faces is the cost of glassware. Of course, one reason for that is breakage. But more to your point–the fact is, people like to steal bar glasses. More to it, beer companies want customers to steal their glasses with the cool logos printed on them. It’s stealth advertising. And I admit it; I’ve lifted one or two things from bars in my lifetime. I’m not proud of this, but it’s the truth. And my perspective shifted entirely once I went behind the stick and I ended up running short on glassware while trying to satisfy thirsty customers. It’s annoying.

P: Annoying indeed. And probably hard to reconcile with your image of him and what he represented to you. I confess that when it comes to some things, I’m very black and white — and not necessarily in the healthiest of ways. I have strong “shoulds” about things like this and this falls on the other side of my line. I have found myself outraged about exactly this — there was that time when a bunch of girlfriends got up to leave a bar and I realized my bag was full of silverware my friend had pilfered. Although that did have the added zing of her having set me up to be the one who would have been the bad guy if we got caught.

But I think there are a couple things going on here that make this hard for you to deal with. One, he stole the stupid mug. Even if the beer companies profit from this (I admit I never considered that, Mme. Bartender), stealing isn’t part of your value system. Two, your uncle is not the guy you always thought he was — and loved him for being.

B: Here’s my armchair psychiatrist, pop-culture take on what motivated your uncle. First, it is possibly the single safest way to misbehave, ever. If he engaged in drunken sex, there’s inherent danger. He could catch something, he could ruin any current relationship he’s in, he could encounter his one-night stand’s jealous partner. If he drank and drove, he could kill himself, kill someone else, end up in jail, have to pay tremendous out of pocket fines. But stealing a glass from a bar..? He gets the thrill of kind of feeling like a little bit of a badass with little to no repercussions. The most that would happen is, someone would think he was kind of a jerk, and shrug their shoulders as they took the glass back and walked away.

Or so he thought, until you unloaded on him. He probably never thought acting like a frat boy–thirty years too late–would result in such anger from you. I almost imagine the song “Glory Days” playing in his head, until you made the needle scratch its way across his mental soundtrack.

P: I probably don’t really care about what motivated him. Because, after all, he’s not looking for our support, you are. What I do care about is how you cope with your feelings about him. He’s both someone you admired and someone you didn’t know as well as you thought you did. He’s all those things you once loved, but he’s some things (a sometimes heavy drinker who lets alcohol override his good sense) you don’t like.

We’ve all been things we don’t like, the question is do we learn from those things? In this case, your uncle seems not to have learned quite enough. This is a chance for you to realize your uncle is human in ways you’re not excited about. It is also a chance to plough through the stuff that you do, that are not exactly aligned with your values and start living into who you want to be.

B: It is a blessing and a curse that we, as humans, can have complicated and even conflicted feelings about one person at the same time. You love your uncle, but you’re also profoundly disappointed in him. I get it. And you’re angry, I get that too. The thing is, you have the power to control what you do here. He is your uncle, but you are also an adult, with all the attendant autonomy to decide how to further react. You can choose your interactions so they suit you without putting you in a position to be made uncomfortable again. You can also choose to hold on to the anger that’s flared up within you–which, after the fact, only tears away at your own well-being–or you can let your anger go. I’m not saying forget it. Remember it. Just don’t let it ride you like an old coat. And take charge of future interactions.

Don’t go out to the bar with him again. That’s where the side of him you don’t like came out, so don’t go back asking for more. I also would not make a point of confronting him about it again, because you’ve already spoken your piece. While his actions offend and upset you, and highlight something you don’t like about your uncle, in the grand scheme of things this isn’t the worst crime a person could commit, and I say that as a potentially irritated bartender who’s run short of glasses on a Saturday night. Your uncle knows how you feel, and you can’t make him see your point or apologize from the heart or stop him from digging his heels in deeper if he’s responded by being mad at you for being mad. Move on. Choose not to hang out with him, but don’t let it ruin Thanksgiving, dig?

P: Since we’re concentrating on you, you have the chance to look at the difference between exercising good judgment (based on your values and common sense) and being judgmental (based on self-righteousness.). It’s true it’s only a mug, but he stole it. And faced with your disapproval he made the childish choice to shatter the mug in your kitchen. (Keep wearing your shoes for a while.)

But our reaction to that kind of nonsense is ours to control. Judgmentalism is seductive. I have heard and succumbed to its siren call on more than one occasion. Your uncle acted like an idiot. He will live with that the rest of his life, because your relationship will never be the same. It won’t be the same because you don’t need to be hanging out with people who boost glassware.

I doubt, however, that your sound value system includes disdaining people who have foibles and weaknesses. When we were talking about this question, Terri and I had this whole long conversation about the messiness of forgiving. You want to let go of your self-righteousness. You’ve lost the chance for him to be a different person, because he did this. You have the chance to accept that weakness (and isn’t that forgiveness?) in your now perhaps not so favorite uncle. But you don’t want to be clinging to self-righteousness when you make the decision not to forget — you want to keep the information about who your uncle is in your brain, and your heart and try and see him for who he is.

For, as always in these situations, the deepest part of the question is “who are you going to be?” How will you be a person of integrity? How will you be the person who moves from thoughtful, accepting (but not embracing) love?

B: If only people behaved honorably, and as we wanted them to, all the time. But they don’t, and getting over a fundamental disappointment can be a long trip. Is this incident going to override the entirety of your relationship up until now? It’s up to you to decide how to manage the information you have. And if you decide to burn a bridge with your uncle, remember, they’re difficult (if not impossible) to build back.

P: This is the hard growing up part that happens as we become adults and our favorite uncles become people rather than icons. And sometimes we realize that our favorite uncles were our favorite uncles when we were children and might not be the best role models for us as adults. (I had this uncle. Brilliant, funny, talented — and an alcoholic who messed up his life and his children’s) He’s not a friend or acquaintance that you can move into the “former” category. He’s family. He’ll be at Thanksgiving or at your Winter Celebrations. You’re going to have to make space for this extra bit of info you have about him. Because he’s still all the things he was, plus he’s this one other thing that you’re not crazy about at all. There are maybe some other things you’ll not be excited about.

He can be some of those things to you again if you’ll let him. You might not be ready for him to do that by the next holiday. And you have a choice, you can go home and nurse a grudge and cast a great pall over the holiday, or you can find something else fun to do that holiday that will necessitate your absence (something fun, did you hear me?) and give yourself some space to come to terms. Families are filled with foibles. You don’t need to encourage him and you may never have the relationship you had with him, but acceptance will keep your family, your family. You may not need to share with anyone what happened… (that’s why you wrote to us, not your mom!) but you do need to change your relationship with him to one you can live with… but you need to do that when you’re not nursing your broken heart. 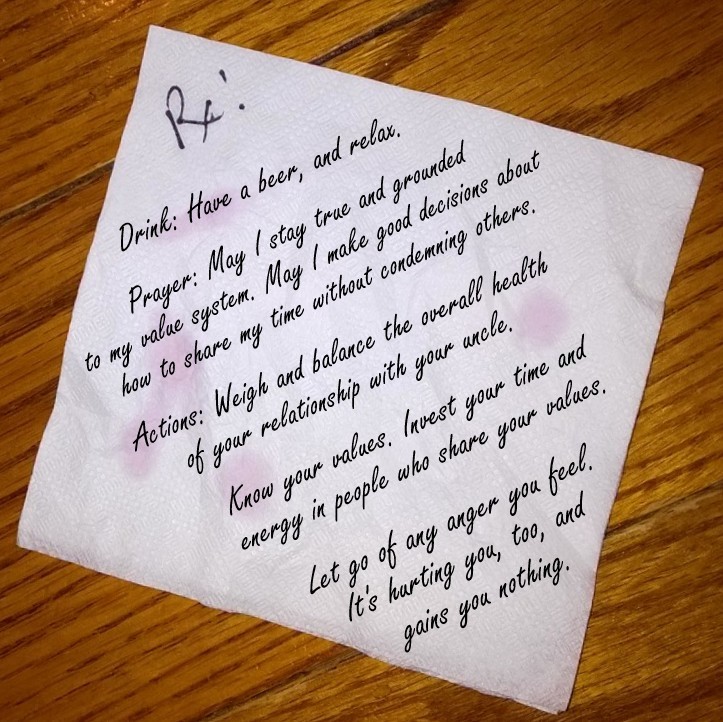