My sister, “Cindy” is driving me out of my mind. She is so irresponsible.

A year and a half ago we celebrated my father’s 90th birthday. My sister lived in another part of the country, so she took some time off work and came home, staying at our parents’ house as she always does. The day before she was ready to leave, Daddy died of a heart attack.

She called work and took a leave of absence, telling them she was staying with our mom to help her get settled. At first we thought it was great that she was there. It meant Mom had a chance to get used to Dad’s being gone and would have some help downsizing.

But, Cindy’s been home with her now for about a year and a half. It’s way past time for Mom to move into assisted living and for Baby Sister to go home. Mom isn’t getting the socialization she needs. Mom says she isn’t interested in moving out of her house; she wants to live there with Cindy. Cindy always takes her side. She also keeps insisting on being included in Mom’s healthcare decisions. The thing is, I’m a nurse. She’s not. I have her medical power of attorney.

I pay Cindy a salary out of mother’s pocket and we’re giving her room and board. She gets two days off most weeks, but complains if the other three of us can’t fill in on the times the nurses can’t be there on the weekend.

Last week Cindy’s former partner died. I’m sure she’s sad, but she hasn’t been with this woman for about 2 years, and it’s not like they were married. Hell, she doesn’t even believe in marriage. I can’t plan a schedule for the next month because Cindy doesn’t know when things are going to happen in Houston. Why can’t these people make a plan and just stick with it?

Cindy’s an artist and calls herself an “activist.” She’s almost 60. It’s time for her to get something steady in her life and stop leeching off the family. It’s also time for her to stop filling Mom with the notion that she can live at home. Mom doesn’t have a lot of time left I want her to be safe and not constantly reminded that Daddy isn’t here any more. We all live outside Boston (except of course for Cindy) and would make sure that someone visited Mom a couple times a week. There’s plenty of money to make sure she can be somewhere nice. And I’ll never need to worry about the scheduling.

Signed, Tired of her interfering.

P: Wow, it must be tiring, being in charge of everything, including a few things you might not need to be. And even the things you’d like to have well organized are not necessarily going to fall into place.

I understand that you would like your Mom to feel better. You don’t say how old she is, but if she was happily married to your father a long time, grieving becomes a life-long process.

I’m not sure why you want to move her out of her home. I understand that it requires more maintenance, although there are programs that help with that, particularly in large cities. You say that there is plenty of money, so why not throw home-health aides at the problem?

I’ll admit I’m biased. Although my mom was in assisted living and then a nursing home, I spent (and was paid by my parents) a lot of time with Mom. I fed her twice a day five or six days a week. It was only later that I realized there was someone in my hometown that I could have had manage their care. I could have moved into their home and had support.

Mom had dementia and was moved a lot. Every single move was a very hard adjustment and she lost ground. You have a sister who is willing to be home and that’s what your mom wants. Why don’t you want that? You don’t say that Cindy’s not taking care of her.

B: I’m concerned about the idea of “downsizing”. Your father’s been gone for not that long of a time, really. He was 90 when he passed away, and I’m going to presume your parents married in their early-to-mid 20s. They have 60+ years of living put into their home. Why the rush to “downsize”? What’s the hurry? I’ve lost my father, too, and don’t feel any need to downsize my mother and distill the entirety of their lives together into…what would make you happy? One room? Two? I’ve watched it happen to other people, who have watched their belongings get carted out the door around them. And I remember one of them saying, “I can’t believe my daughter is doing this. I’m not even dead yet.”

P: Why don’t your Mother’s wishes carry any weight? Why can’t she have what she wants, especially if Cindy wants to give her that? My sister also had medical power, but because I saw Mom every day, and took her to the docs and to the emergency room — oh, yes, there are lots of emergency room visits with aging parents — she didn’t dream of making decisions without my input. Because I saw her every day.

B: Agreed. Your desire to leave your sister out of your mother’s medical conversations is, quite frankly, alarming. If you’re a nurse, then you know that communication and information are paramount in providing medical care. What do you gain by not having your mother’s primary caregiver as up to speed on her medical information as possible? Other than some odd sort of gloating right that you know more than Cindy, so ha ha Cindy. I am not sorry that I don’t understand this.

And what’s with the question of socialization? Does Cindy lock your mother in her room and never talk to her? Because your mom saying, “No, I don’t want to move, I want to stay here with her” tells me she likes the arrangement. Do you think Mom needs bingo night? Does your mom even like bingo? It feels like your idea of socialization is more “put her with people her own age (whom she neither knows nor cares about) so she can mark time until the big sleep” and less “leave her with one of her children, whom she loves, and who is offering her services as an end-of-life caregiver”. If you think Mom needs a bingo night…offer to take her to bingo. See how it goes.

P: This feels a lot like sibling rivalry here. Make sure that in your fight you leave enough room for your Mom’s well being. And I can say with assurance that 1-2 visits a week will not compensate for the comfort of her daily interaction with your sister. And as fine a home as you find, they will not love your mother the way your family does. If Cindy’s willing to do this work of love, give thanks and pamper her.

And really, what is it about your sister that you don’t like? I’m presuming her name is Cindy for a reason. Is Cinderella a family name or just a position? Her estranged partner dies and you need to know when the funeral is rather than asking her if she needs some time off and does she want to come to dinner? (And oh, btw, activist is a real word and doesn’t need the quotes around it.)

B: Your reaction to the death of Cindy’s partner (former partner, someone who was clearly very important to her) saddens and upsets me. It’s really too bad that she couldn’t die according to a more convenient timetable. For you. Though that seems to be at the core of your issues in this question. Your mother isn’t finished mourning quickly enough. Your sister hasn’t moved out in a timely fashion and is, furthermore, delaying your mother’s resigned exit out to pasture. And now, with Cindy’s partner up and dying on you, you may have to muddle through a few days that are loose and unscripted. Normally, I would sarcastically state that that was unfair of her to do that to you, but I wouldn’t want you to think I was serious.

P: Cindy works five days and has to cover the couple of hours that you guys can’t make work during the week? Are you kidding me? What makes you think you’ll all make time to see Mom when she’s in the home and you’ve packed Cindy back to Houston? If Cindy’s staying there — oh right, living at home with your mother — do you pay her for eight hours or round the clock care? If it’s only eight hours, you’re getting a steal.

B: Ann, it can be difficult to have someone you treat as an indentured servant, when you actually sort of don’t want that servant around.

P: However much we love our parents, it’s exhausting to be present. Recognize that. Support her as she does this very hard work. And you need to work on getting over the sibling thing, as it’s really unattractive.

B: Again, we agree. If your baby sister is 60, then you’re…pushing 70? Isn’t it time to put down whatever burdened you with all this anger? For your mother’s sake, if for nothing else. You’ve put her in the middle of your personal feud with Cindy. Why do you think it’s OK to use your mother as a chew toy as you rehash some lost but not quite forgotten rivalry?

P: Look, I have to believe you want the best for your mom and you’re worried. But you can’t control people’s aging process. You put her in a home and they’ll keep her alive, but not necessarily living. Stuff and familiarity is so important. She keeps her rhythm and not the institutions rhythm. She has someone who loves her living there all the time.

She has you who must love her, although, you might want to put more of that in the way you talk about this. If managing your mom is too hard, pass it on. Hire someone. Or let Cindy do it. Put your Mom and Dad’s money to good use. Let her live as large as she can in her home. Everyone wants to die at home. Sounds like your mom’s got the resources she needs to manage that. Why not make that dream come true? Certainly she helped you realize your dreams.

And whatever you’ve got going about your sister, you’re old enough to get over it. 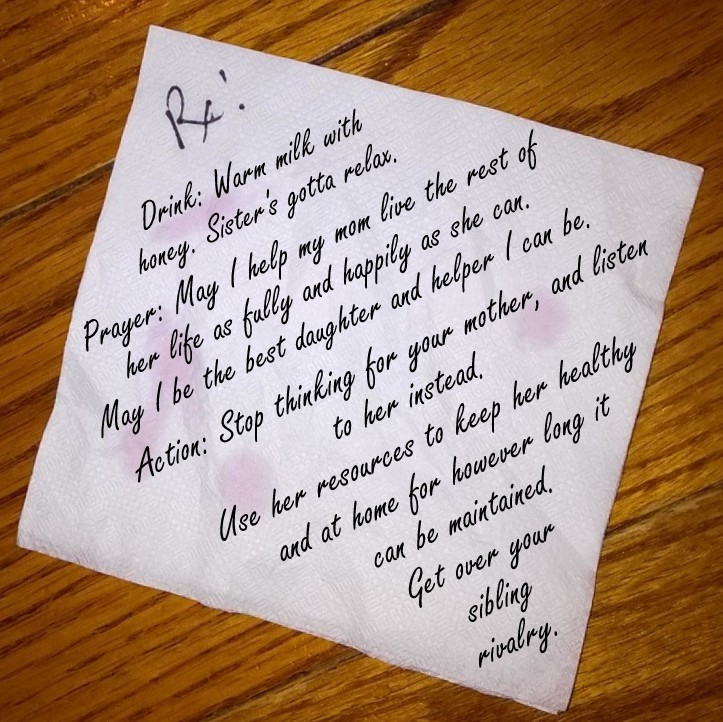