I am a fan of the gingko tree. I don’t know that I ever knew them before I went to college, But over by the library and the humanities building there were a bunch of them. Come fall, they were carefully watched. Everyone wanted to be around as the “gingked!”  It was amazing to watch as the trees poured their golden bounty down onto the earth. (It was less amazing to smell it… whew. Decided I should look that up. Here it is from eHow:

“Ginkgo trees are large, deciduous trees found in temperate climates. Hardy trees well-adapted to withstanding harsh urban conditions, they are able to thrive despite poor soil, pollution and packed soil. Female ginkgo trees produce large amounts of seeds covered in a seed coat. Ginkgo tree berries stink because the seed coat contains butyric acid, a chemical found in vomit, which is released if the fruit is allowed to rot.” ok. eww.)
They release in such a short time. It’s amazing. Somehow something gets in that tiny, little tree brain and boom, leaves fall in a glorious golden profusion.
More recently, I love the gingko because they have been planted down at my old town pool in honor of my parents and my sister. There they wave and rustle and will for long after I’m gone… That certainly makes me proud, if not happy.
They herald the end of Fall, they’re late to turn. But they hold on, hold on, and then they don’t and then they presage Winter. This year, they’ve done a great job, Hallowmas is the 31st… and the trees are just now releasing their hold on this beauty. Peace in living with the earth, sweet Peace indeed. Makes you think that Mother Earth and Nature know exactly what they’re doing! 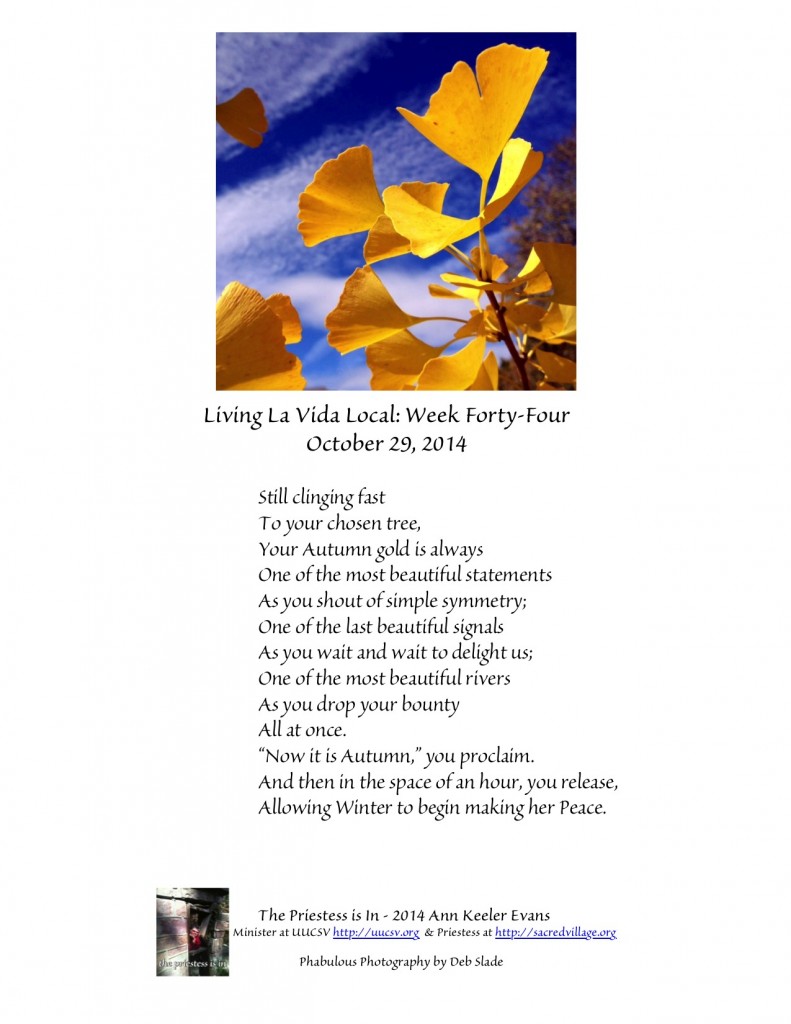