One of the hard truths about this time of year is that we are forced to confront what we may have missed, or have lost. For some of us, those of us who are very privileged, the holidays have been sweet, families have been united and traditions have traveled between the generations. But even those people have lost beloved family members who are no longer there.

I love to think of the root of the word remembering … to re-member, to piece back together. To take the remnants of the good and to make something beautiful from it.

It takes a while to demand (of yourself) the space to celebrate holidays in your image in a fashion that suits you. But you are worthy of that. If you’re alone, find other people who also are. Or celebrate another holiday and make that yours until you can reclaim your own for yourself.

Remember the holidays… Feel free, not to long for what you once believe you had, but to create that which celebrates the deepest possibilities of life. Savor the Dark. Explore the Mystery. Be amazed by the Wonder. Gather with those who love you as you are — even if that means you’re alone and loving yourself fiercely.

Allow your holidays to be filled with Peace. Share that with others. Remember. Make that cloak of beautiful memories and move forward with joy. Peace be with you. Peace be with us all.

Alternative Advent December 12 – 15¢ if you have dishes in your house. There are actually people in our Susquehanna Valley who do not. So be generous. if you have more than one set, try 15¢ per set. 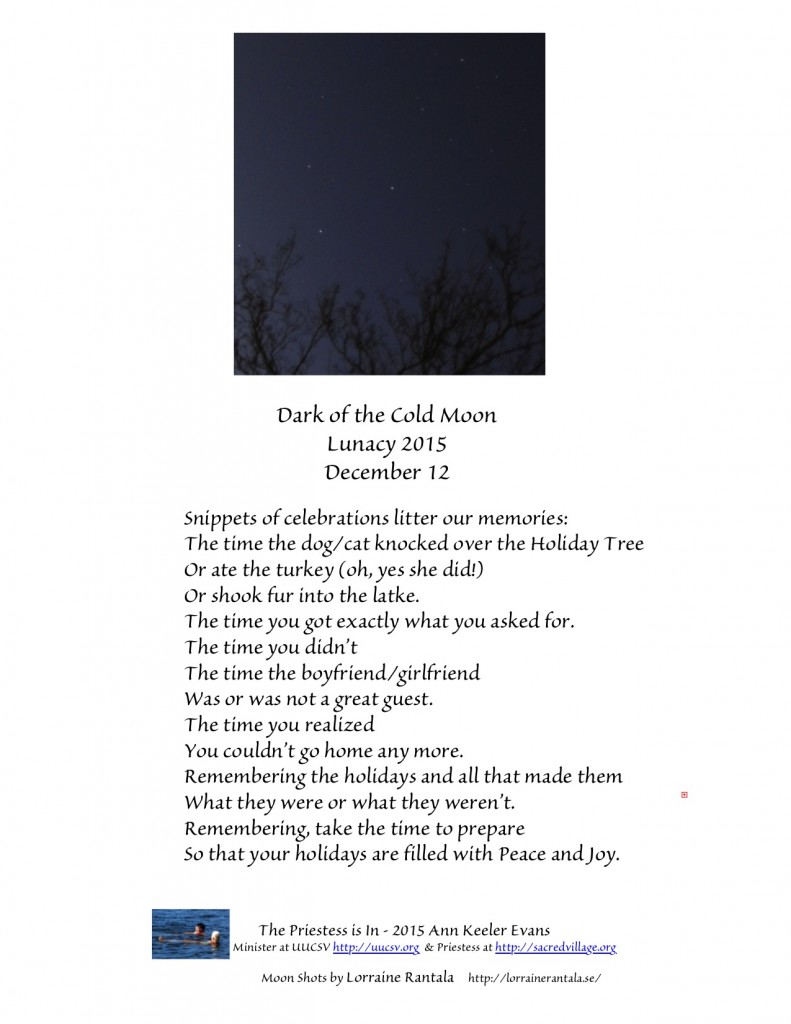 It’s really up to us.

But it’s urgent, I believe that. Needed by people and by planet.

My heart is with our daughter and granddaughter as they let go of a man they loved. Ed Lund, we are grateful for your life and our presence in it. Today, your East Coast Family will sit by a fire and remember both that we loved you and that we love one another. 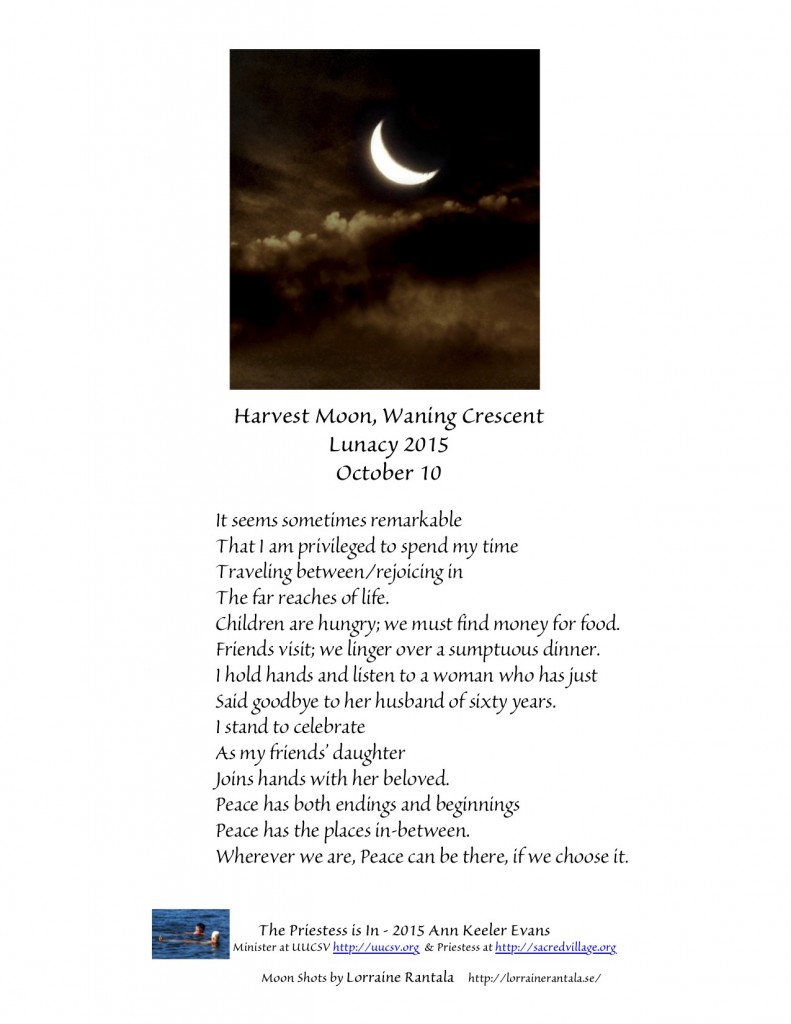 We need to pay attention. Oh, we will, we assure ourselves when something happens…

And then life gets back to normal and we slowly become oblivious to the individual little moments that make life astonishing.

But life is fickle, fleeting. I was about to write momentous and then thought about what that meant… moment-ous… each moment.

And if we don’t pay very close attention we miss the moments that make life magic. We don’t make time to capture life with all those we love. We don’t notice the wonder of Mother Earth. or whatever.

We have to treasure what we have… because this moment is all that we know we have. Next year’s musings have been taking shape in my mind as Everyday Peace, watchword noticing…

It feels all the more pointed now when Ed Lund is gone from Selena and Grace’s life. He was an incredible gift. Always so present. He’ll be sorely missed. Ed, we loved you. 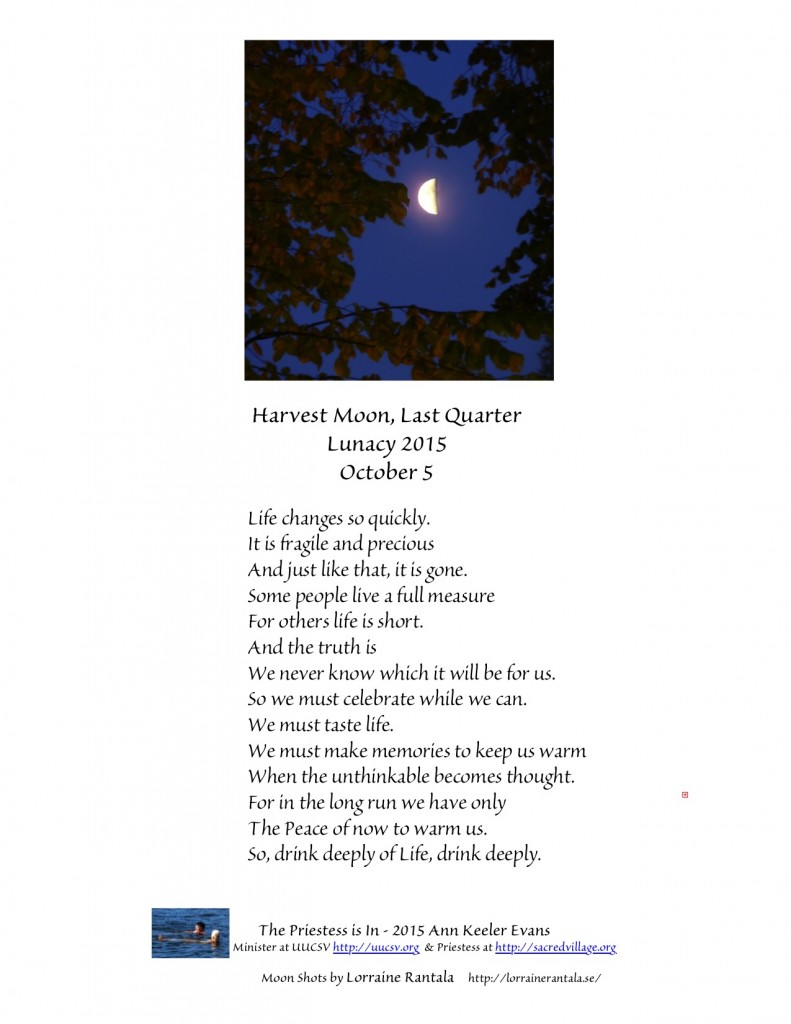 Fourteen years. I was in bed at my friend Carolyn’s house and a friend called wondering if I’d heard.

We’d both lived in New York, though neither of us had known each other then.

I’d watched those towers out the front windows of my office every day for years. They were skyline, they were part of the what seemed like the miraculous world I inhabited. I’d visited. I’d eaten there. I’d gone to a wedding there at the restaurant, in a corner of two windows in the midst of a thunder storm, happening below us.

And although I don’t believe I knew anyone who died, I knew their friends.

I went back a month later and it smelled like death. Of course it did, bodies were still being found. Sometimes there were no bodies, simply wedding rings, watches and memories.

As most of us stood there, stunned, people bounced out of their limo to run up laughing and take their pictures, already drunk at 10:00 am. There was a guy selling hot dogs and souvenir people making money on memories and horror. And the rest of us stood and prayed… My guess is many of us didn’t have words to those prayers or even know to whom we prayed… We were together.

And so many people were missing. Lost. Gone.

Our lives were forever changed.

And now there are others whose lives have been destroyed by the same fanaticism that brought the towers down.

There was a picture of a train station in Hungary where shoes are lined up waiting for people who have walked and walked. Another shows people waiting for the refugees as they arrive in Germany. My mind can’t stop making comparisons to pictures from WWII when people were forced to leave their possessions on the ground and get on the trains.

All these people coming. Will we welcome them?

Can there ever be Peace if we do not?

Even if there can be Peace in the world, can there be Peace in our hearts if we do nothing? There’s a new Moon in two days. Tomorrow is the last of the Fruit Moon. What will we harvest in the Harvest Moon? 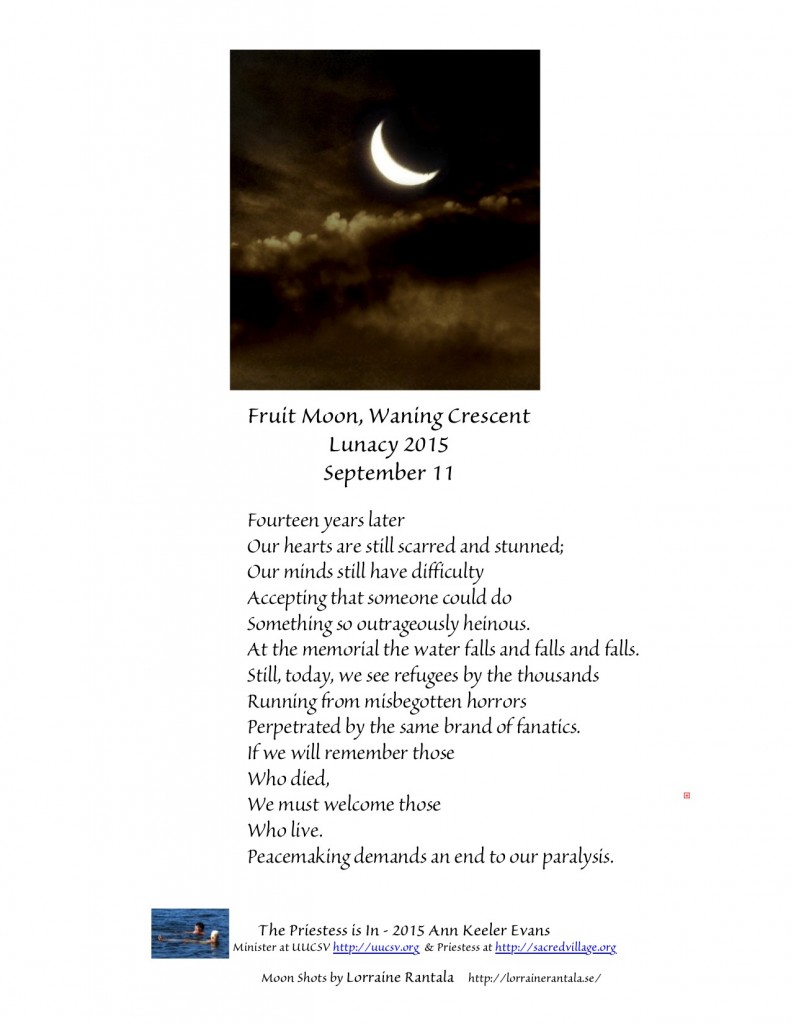 I love my friends from other pieces of my life as much as I adore the ones from this life.

I feel lucky and privileged and loved.

So today, as I stand one foot still in the land I visited and the other stretching toward home, I have to remember that the place in between is also lovely and can be filled with the Peace of both Gratitude and Anticipation. Remembering, Reflecting, Making new memories… all of it. Peace!

Gratitude too for the Ripe Garden Moon. The last day comes not today, but tomorrow! 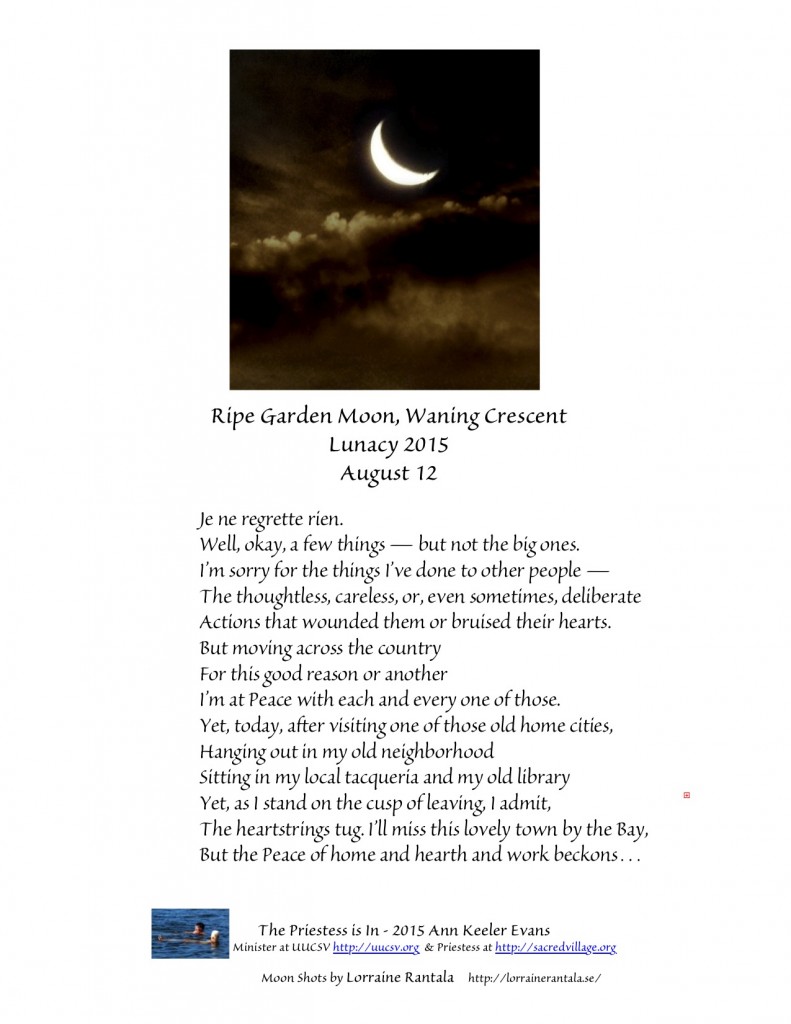 One of the joys of this year’s intensive reading time has been having the opportunity to do it in the company of dear ones, friends and families.

So often when you see people it’s about the things you do together that make a visit wonderful. But there are people in your lives, if you’re deliberate and lucky, with whom the visit is about an opportunity to be yourself together.

Me voila, a sort of boring, nerdish, bookish girl. and there’s my friend at the end of the couch.

It’s always a wonderful thing. This year, as I’m really coming to terms with my sister’s absence, it’s been incredibly reassuring. I’m reforming myself or maybe recognizing myself again. The number of sustained losses in these last years has been enormous.

I hope you have such Peace in your life. I wish that very much for each and every one of you. 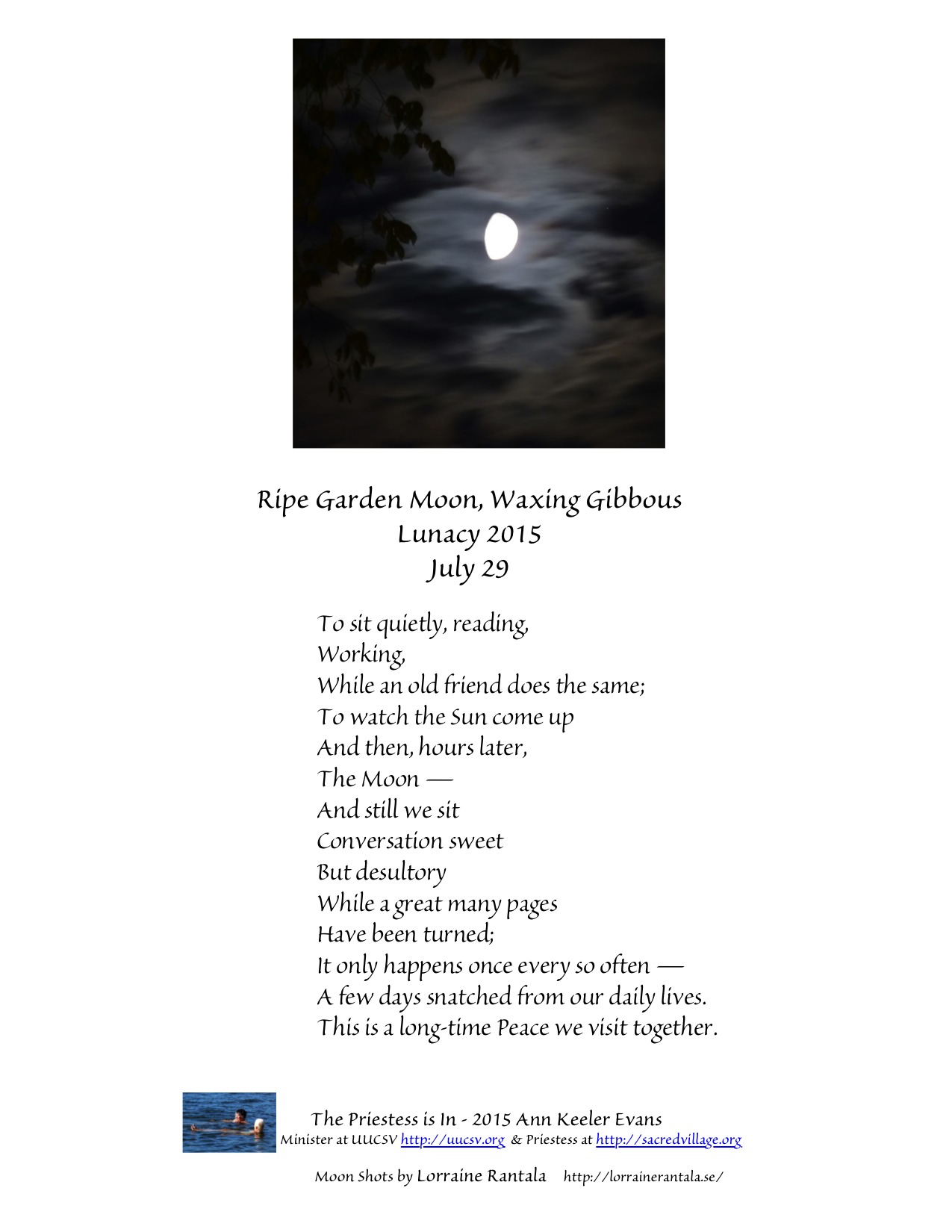