Please help me try and talk some sense into my son. He is 30 and recently got engaged to a wonderful young woman, who is 31. I want to make it clear that we are thrilled that she’s going to be a member of our family and welcome her with open arms. She’s a young professional, works as a buyer for a retail company, and has a good head on her shoulders. My son launched a landscaping business a few years ago and he works hard, so he’s had success building his business. Of course, they’re busy planning their wedding, spending their free time looking at catering halls and event menus. I keep trying to tell them they don’t need to do anything big. Honestly, I think they should just elope.

Her side of the family doesn’t have a lot of money, so expecting her parents to pay for some elaborate affair is unreasonable. My husband and I are willing to contribute some money toward their wedding but we certainly can’t foot the entire bill, either, so the kids would be paying for it primarily by themselves. It just seems like so much money to spend on one day. Who needs a big hall and matching napkins? When I got married, I had a traditional wedding and I couldn’t believe how much money it ended up costing my father. My son and his future wife already have a house and all the expenses of their lives that they have to account for. They’ve been living together for the past five years, too. Because they already live together, I don’t feel like they need some fussy transition to bring them to “the first day of the rest of their lives”, or something like that. They’ve already transitioned, she is already there.

How can I make them see reason?

B&P: We can’t say we think it’s your kids who need to see reason. This is their wedding. Your letter makes us uneasy on a couple levels. We hope that you’re sharing your misgivings with the Bartender and the Priestess before sharing them with the couple. Because we think you have some work to do. This is such a common problem. Weddings are supposed to be joyous but instead, often bring out odd family dynamics. Ones that need to be dealt with so that when it comes to the Big Day, it’s all about the couple getting married. While we understand that you have hopes and dreams for your child, you have to understand that he’s the person who’s now making those hopes and dreams come true.

B: Since Ann is, among her many talents, a wedding priestess, I’m going to let her take the point on this one. Go to it, Annie!

It is not your decision whether or not they have a wedding. Presumably, you were around when your parents, not just your dad (unless your parents were divorced) were spending that money on your wedding. You could have called a halt to the spending at any time.

You have options for your generosity, but no options, really, to create financial leverage.

P: Secondly, it’s their money. You’ll give them a set amount (if you so decide) and then it’s up to them to figure out how to finance the rest of the event. You say they have a house and life, and you say they have the jobs that support that. No bank gave them money for a house if they didn’t have their finances in order. Hopefully you did a good job raising your son and he has solid financial values and isn’t going to endanger his future.

If they make some mistakes, hey, that’s part of their adulthood. All of us who have reached this stage have made some seriously bad investments in our time. And yet, here we are.

But he’s now out on his own; making his own decisions with his new family. She’s his primary family now. Your family and her family are the clan around the couple. You’re in a supporting rather than an organizing role. And by that I mean, it’s his checkbook not yours. If they want to get married, your gift or lack thereof will not be what determines their actions.

B: And not only is it your son and daughter-in-law’s money that you’re trying to manage, even though you make no mention of their actually asking you for any financial assistance. You’re also trying to dictate what’s to be done with her parents’ money too. I am often suspicious when someone employs a persuasive argument cloaked in, “It’s not just me. I’m also trying to be thoughtful of these other people who haven’t asked for my help in this.” Unless her parents called you up and personally asked you to mediate wedding plans on their behalf, then it feels like you’re trying to abdicate your responsibility for your feelings. For whatever reason, you don’t want to own up to why you want your son and daughter-in-law to keep their wedding small, so you’re putting the blame on her family. That’s dirty pool.

P: Thirdly, let the Priestess (aka the Wedding Priestess) assure you, people get married at all points in their relationship. Times have changed. You may or may not like that. But, you can’t as the song says, hold back time. Again, you can choose not to participate, but that won’t do much for your relationship with your son, your daughter-in-law or your some day grandchildren.

B: I am not “aka the Wedding Bartender”, but I’m no stranger to the industry, and I’ve even officiated a few myself. And what I’ve seen, over and over again, is that weddings aren’t necessarily about sending a blushing couple off into a new life together, no matter how much Jane Austen one watches. Instead, they are about two people choosing each other, and declaring in the way they deem most fitting for them, that they love one another more than anyone else. Do I think they’re expensive? Yes. Do I think they’re often frivolous and overdone? Yes. Do I think that it is the decision of the bride and groom–and them alone–to determine what is the best way for them to celebrate and mark their feelings for their life partner? Yes. And there’s no right time, no external time frame, that decides what merits what level of ceremony. Some first-time young-marrieds want a simple legal ceremony performed by a JP, some fifth weddings want the whole shebang. And no one else has any say in the matter

P: And fourthly, and perhaps most importantly, what I hear in your statements is that you have no respect for your daughter-in-law. I’ll call her that rather than soon to be daughter-in-law, because as you say she’s already there. That’s a dangerous walk if you want a relationship with your son. He loves her. He has made his decisions. You need to find a way to love her too, because he loves her and he has made his decisions. I’m wishing them happiness. In the sad event that this relationship ever comes apart, remember you never get to say what it seems your truth is, if you never liked her anyway. He’s her choice, you’d better make ones that will get you what you want, which is ideally a great relationship with your son. So, again, my suggestion would be: find a way to love her.

B: There’s a symbolic line that gets crossed when two people marry, and that line involves the recognition that one’s children aren’t children any longer. They’re on their own, out in the world, ready to work and do chores and have babies of their own and enjoy all the ups and downs of a self-determined life. Traditionally, in the fables and the social rituals we base many of our marital practices on, this thinking dominates. It takes center stage even if it doesn’t resemble how the bride-and-groom-to-be actually live. You need to let them be the adults they are. Though they may have been on their own for years, you still call them “the kids”, and you’re still trying to maintain some kind of control over your son. And you need to trust that they’ll make decisions about their intended ceremony based on their needs, desires, and budget. Your son and daughter-in-law are not kids, and they’ve already established their own domain. He’s got his own household to manage, he is no longer a dependent of yours.

P: I’m sorry; this isn’t what you wanted to hear. The hardest part of raising children is keeping those hands open to let them go. Still, it’s probably the most important part. You and your husband, if he’s part of this decision, need to decide whether you’re going to give them money. You need to decide if you’ll participate in the preparations. But whether they have a wedding is–oh, I’ve avoided this, but here it is–none of your business.

I can say that I believe that choosing generosity is always our best investment in the future. There’s an old adage that says the groom’s mother should wear beige and be quiet. I don’t believe that. I would say: Wear something wildly flattering and be the warm, loving, encouraging mother-in-law that your new daughter is going to want to come home to with her husband.

B: And look at the son and daughter-in-law you have before you. You raised a boy who became a man who started a successful business before he was 30. This man was thoughtful in his choice of life partner, and chose a woman who is smart and capable and building her own career, successfully. Let their actions be your guide. Don’t make the mistake of thinking you know what’s best for them; your role as mother-oracle is over now. Instead, love them, and believe they’re able to decide what’s best for themselves. 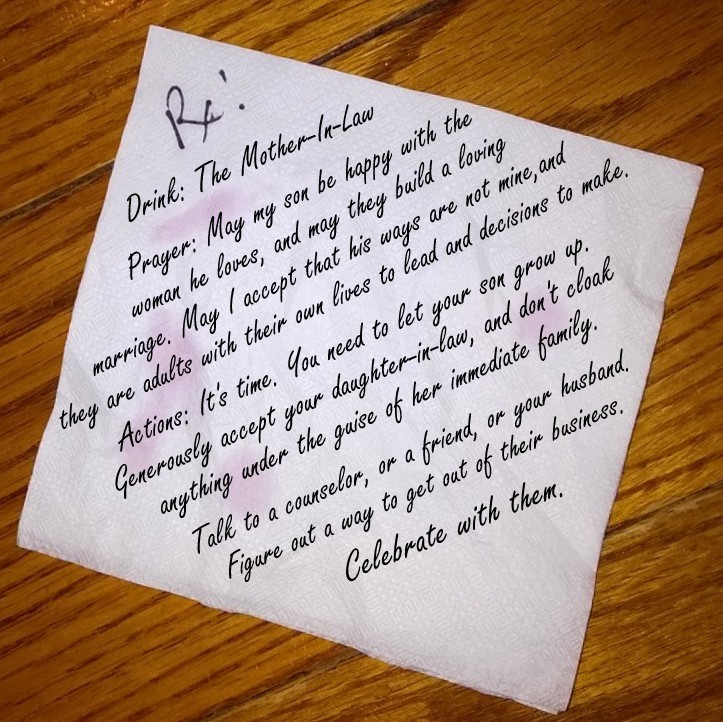