The other day I posted an article on FB which was somewhat more pointed than those I usually post. So, yes, mea culpa. And I believed it. It was a harsh review of a man who had tweeted smack about a well known little girl. He played base ball for a local university and got lost his spot on the team as a result. The lovely little girl, wrote forgiving the player and asked that he be reinstated, saying she was sure he didn’t mean it. The University president, bless his heart, stood firm. Some people felt the president was mean. Many of us did not. This article spoke about why the guy deserved his penalty. He’s a grown up whose tweet unintended or not savaged this little girl. He’s not the point in this — she is. He created the problem. He’s not a victim.

What followed was a storm of incivility. It started out well. Someone posted and explained why they were happy to see the post. A person who must follow them, because he’s unknown to me, wrote to complain that this was an isolated incident of stupidity and hatred. And that it was time for people to get over complaining about racism and sexism. I disagreed. He called me names. (He didn’t particularly hurt my feelings, since it was a very childish reaction. He didn’t quite call me a poopoohead, but the response was at that level.)

The original responder took exception not only to his response but to his style of response and very civilly but pointedly addressed what he had to say. And so it escalated. Eventually, more civil responses pushed him to remove his posts.

This exemplar showed everything good and bad about social media. Too many people are not paying attention to what’s happening in the world and are willfully ignorant of the problems people face. Too many people think that one responds to things they disagree with by dismissing another’s opinion or name calling. But, some people are willing to look in the mirror at themselves and at society’s unwillingness to face its problems. And they speak up in sane and respectful language.

This is wonderfully reassuring. So on this Pink Moon Sabbath, let us call for a cessation of the petty interactions and a deepening of understanding of the divides that limit our movement forward as a society. Let us be present to what’s going on. Let us be Peace-makers and Community-builders. Peace needs us. And we could stand a sabbath break to reflect and relax. Hope your day is lovely… 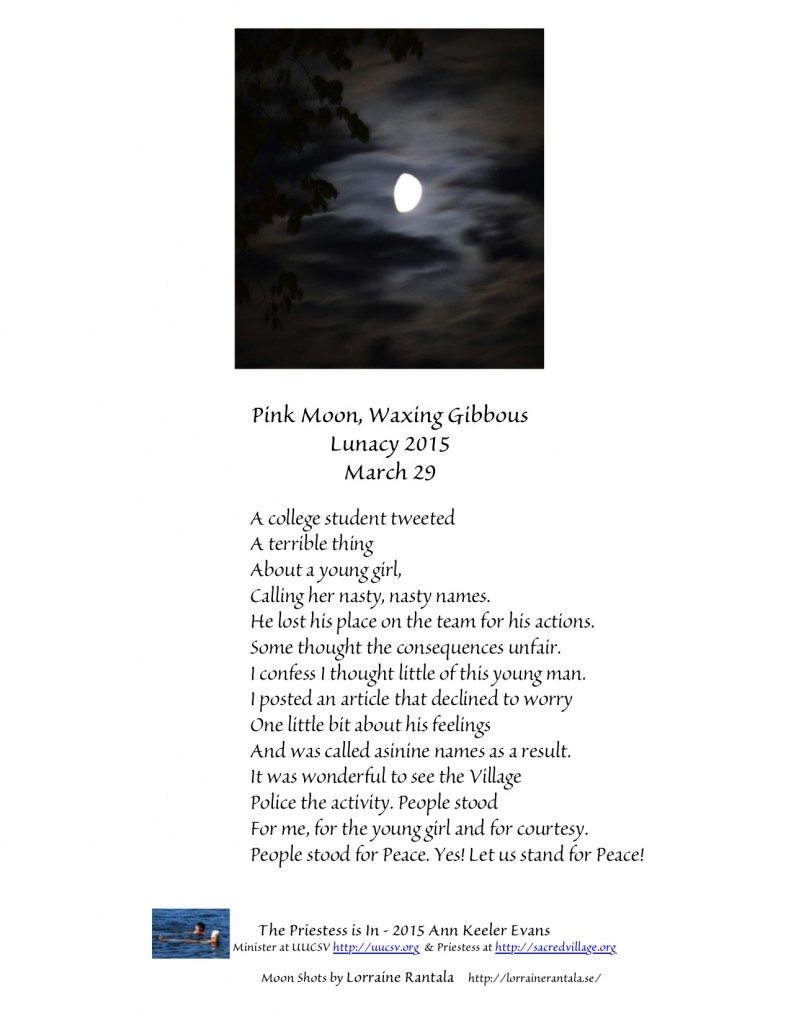