I’ve been involved with a man, “Marc”, for six months now, and I really like him. He’s got a lot of admirable traits that most of us look for in a man. He’s gregarious, he’s honest, and he’s well-mannered and respectful. And, of course, he has baggage.

Marc was married before, but it ended poorly and he’s skittish about relationships. I get it. He’s also got this friendship with another woman that, frankly, I find confusing, and I don’t know if she’s just a friend or a romantic rival. They’ve been friends forever and I don’t mind that. But, he tells me things, particularly that she wants a relationship with him, but he’s not willing to give that to her yet. Honestly…I don’t know if I need Marc to be that honest with me. You know what I mean? He’s also told me that he loves her, and I don’t know if that means love-love, or friend-love. I’m so confused.

The other woman currently lives in another state but is considering relocating. Closer. Like, to our town. Marc says that her moving closer won’t necessarily mean he’ll want to be with her, and whenever he says that my stomach just plummets. Why is this even an option? I’ve been the girlfriend who’s been around, and caring, and am now emotionally involved. She’s just been some figure in the distance. What can I do to make him see that I’m here? Or should I try and protect my heart and walk away?

B: I’m going to take issue right off the bat with this sentence: Marc was married before, but it ended poorly and he’s skittish about relationships. I get it.

No, you don’t. You don’t get it, because you’re not even listening to him. You say he’s honest, and you’re right. You just need to hear what he’s actually saying, and not what you want to hear (or decide to justify, if you don’t like your initial interpretation). He’s basically saying, over and over again, “I don’t want to commit to you.” He says it when he tells you he’s skittish. And he really says it when he says that this other woman moving closer jeopardizes the relationship you’re currently in.

Please note: by “relationship” I mean, you and Marc know each other and have some regular communication, but you also have relationships with your hairdresser, your co-workers, your mail carrier, etc, etc. The word “relationship” does not necessarily mean, you know. Relationship. Moving on.

P: And here’s the thing, when you’ve had a bad marriage and you’re skittish, if you’re a grown up, you do a couple of things: 1) you get some counseling and work through your issues, 2) you’re up front, not that you’re skittish, but that you’re unavailable. Oh, and 3) you probably don’t date someone here, while you’re planning on moving someone in from far away. So that’s him. What about you? As Terri says, and trust me the Bartender has heard ‘way too many of these conversations from intoxicated, broken-hearted people on the other side of the bar, you’re pretending that he’s interested in you. Why go out with someone who is not going to be in a relationship with you? You’re wasting valuable time or you’re using him as an excuse not to move into a grown up relationship while indulging in the drama that must ensue.

B: Now. I am not saying Marc doesn’t enjoy your companionship, and it’s possible that on some level he cares about you. But honestly, you sound like you’re a relationship fluffer as far as Marc is concerned. You’re enough to keep him aroused and entertained (on his terms), but not so much that he will take the relationship all the way.

Despite his vaunted honesty, dear, he is behaving dishonorably. What he’s doing is manipulative. Telling you that your place in his life is not secure, while “honest”, allows him to keep you at arm’s length and at the same time, keeps you walking on eggshells. Have you ever felt a moment’s peace inside this relationship? Have you ever felt secure, like you’re “home” with him? All you’ve told me and Ann about are successive instances of insecurity. NOT feeling loved. NOT feeling appreciated. At the end, you posit that you don’t even know if he knows you’re really there. WHAT. Though from him end, I wonder if he gets a real turn-on from it; he keeps knocking you down and you keep coming back, begging for more. This relationship—again, I use the term loosely—is so one-sided even you admit you’ve disappeared into it. Do you determine your sense of womanly worth by whether or not you’re with someone? I’m not being facetious or mean, it’s a yardstick people often use—men and women—to measure themselves. You’ve already signed on to this and have agreed that this is your dynamic these last six months. Do you see it changing in a year? Can you live with this for another three years? Five? Do you still want knots in your stomach and eggshells under your feet twenty years and a few kids from now?

P: Wow, I can’t say I think there will ever be kids… It won’t be enough about him. I wish I could say I don’t have any experience with this. But I bet most women have dated some version of him, hopefully for a short time. It was funny, right before Terri received this question I’d been reading an article (help, I can’t find it) that talked about why your ex would want to remain friends with you — big answer: because he’s a narcissist. He wants all the attention. And it’s an easy parallel to draw with Marc. He’s got “marriage issues,” he’s got a girl back home, and he’s got you keeping the home fires burning. And he’s so “honest” and “meaningful” and therefore must care about you, right? I wish he did. But more truthfully, I wish that you didn’t think he did. Whatever he’s saying, let’s pay some attention to what he’s doing. (A lot, and not much of it with you.)

B: I wish I had nicer things to say about where I thought your relationship could go, but I don’t. I think you’re Marc’s Miss Right Now, but I don’t think you’re his Miss Right. Of course, I can’t make you do what you don’t want to do but I can’t see a reason for you to stay. And more to it, I can’t see a reason why you wouldn’t make an appointment with a therapist and discuss your willingness to be strung along for six months, and even fall in love with the stringer. You know this relationship isn’t right, which is why you’re writing to us. But in much the same way that I can’t make you do anything, you also can’t make Marc do anything. You can’t make him love you more, you can’t make him commit (and mean it), you can’t make him stop having contact with Miss Out-Of-Towner. The only thing you can control is your behavior. Take a good, long, hard look at what you’ve got and where you’re going. If you truly, in your soul, like it, then stay. If your stomach drops to the floor and you feel that sense of panic, then I think you have your answer. Good luck.

P: I not only want you to look at what he’s offering, I would like you to look at what you want and why you’re willing to jam yourself into a relationship that gives you no place to be a valuable person. How can you move forward in your life if you’re so willing to be stopped by someone who really doesn’t care for you? Because if he cared about you — not for how you make him feel, but for you — he’d leave the relationship because he wasn’t giving you what you deserved. Nope. He’s using you and you’re enabling it. Are you enjoying the drama? I’ll tell you, drama is not love; it’s just drama. Please give yourself better. Allow yourself to deserve someone wonderful who’s ready to be in your life. Leave so you can have it. 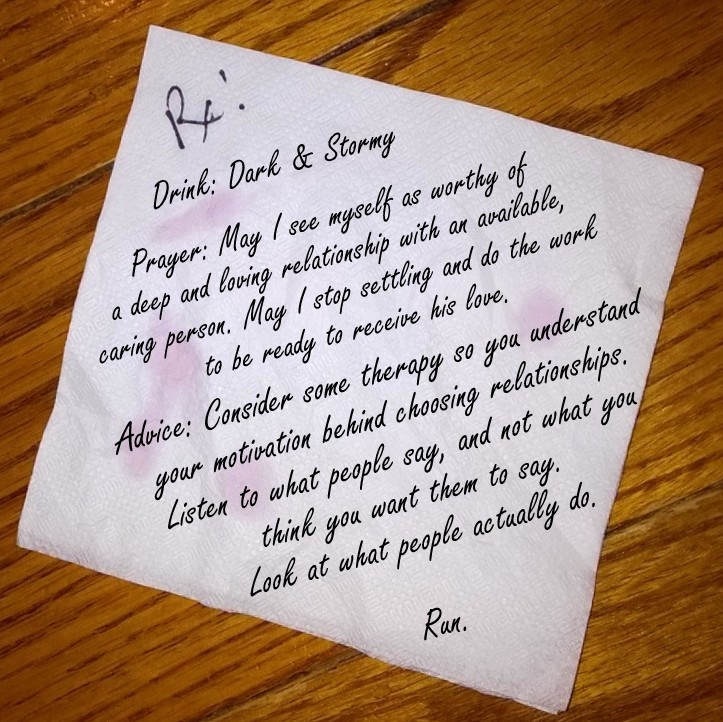