I come, as I’m sure I’ve told you, from a family of cloud watchers. Time was I could tell you each and every name. Now I just pause in admiration.

But I always thought it was magical to see a storm contained in a cloud moving across the landscape. Apparently I’m not the only one. Here’s what my friend Barbara had to say. (If we’re lucky, we’ll see her photos next year.) Beautiful words… can’t you see it coming in?

“Reminded me of when we lived in the country. Our house was up on the mountain above the UPS on route 11. We were part way up the ridge, with the back of the house in the middle of a field, facing the woods and the woods continued up the rest of the ridge. We could see the weather come over the mountain. Usually storms came from the northwest edge of the natural bowl we lived in. The woods were loaded with silver leaf maples. We could stand at the back of our driveway and watch the storms come over the mountain. First the sky would get dark as the clouds came over the ridge, then as the wind began to blow, the trees offered the silver under bellies of the leaves. It was like watching ocean waves as the wind caused waves of silver washing from the  northwest, across the trees…across the mountain.

First we could hear the thunder, see the lightening.

Next we could see the wind as the branches blew revealing the leaves’ silver. Waves of silver moving west to east. Thunder, lightening, dark clouds, leaves blowing. We could hear the rustling of the leaves as the wind and rain moved over the mountain and across the tree line always west to east.

Excitement would increase as the rustling, the silver waves got closer. We could watch the rain line moving towards us as more silver revealed itself.  The rustling got louder, the darkness filled the sky…wave upon wave of silver leaves spread from the western edge of the tree line to the trees directly behind us. we could feel the wind, feel the energy of the storm but we didn’t want to go in, to leave the intensifying excitement of the approaching storm.  Finally as the wave of silver passed us, sheets of rain fell and we would retreat to the safety of our home.

Summer afternoons and evenings brought thunderstorms. In our corner of Northumberland county they brought waves of silver, waves of beauty and waves of excitement.”

Peace my friends, Peace of the silver storms to you. 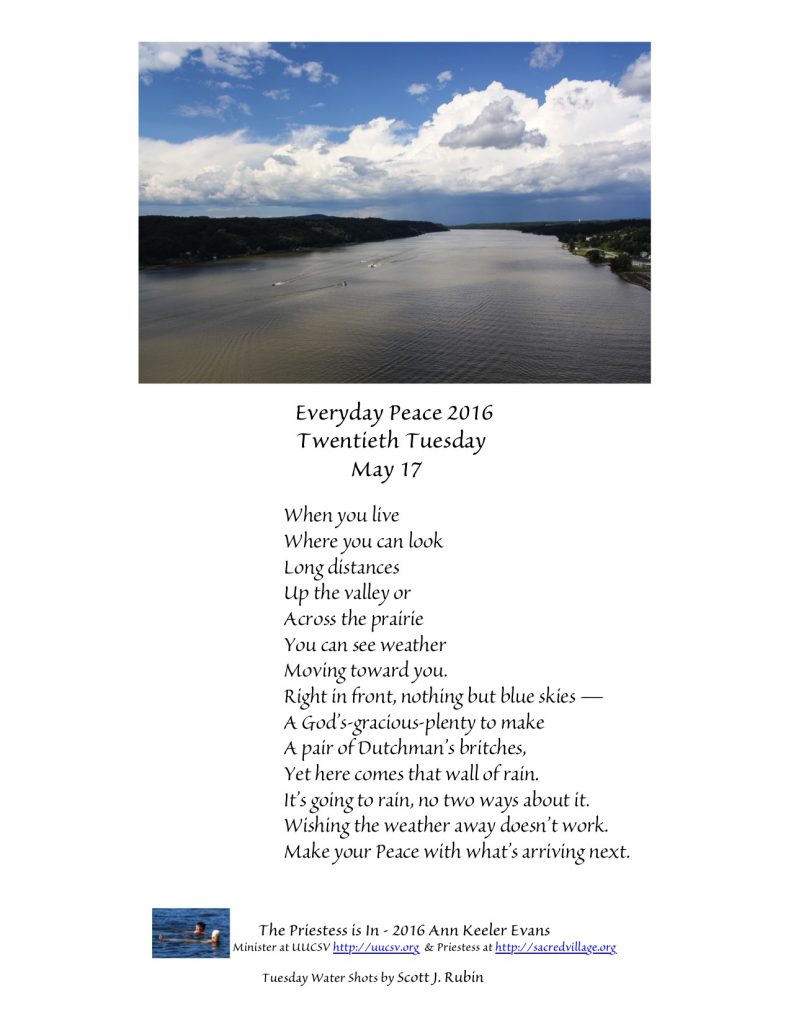