We don’t know if the people who stole our friends’ car were kids on a dangerous joy ride or souls with more nefarious purpose in mind. It was fairly interesting to talk to some people at my husband’s gig last night, apparently, more than one guy we now know as fine, upstanding citizen, at least once drove on the wild side.

I was such a good girl, and in fact, some appearances to the contrary, still am. Never strayed toward that line. And I’ve never been one to throw myself down a hill on skis or hop off a high dive, or, or, or. I hope I take mental and emotional risks now and again… but I don’t get how it’s fun to jack a car.

And we hope that’s all it was. stupid kids who some how missed the respecting property memo.

And whatever the intent, I’m familiar enough with the sense of violation you might feel…I’ve had a person rummage through my chest of drawers, looking for drug money. Bastid stole my ukelele. I haven’t played since. One wonders what the street value of a ukelele is… oops digression.

When I lived in Oakland, where no one dreamed cars were safe, Gramma May channeled her insomnia to the good. she and her television sat and kept watch. So when a local gang thought Aileen Street would be a good place to set up Car Boost School, one car was broken into, and then she made two calls: one to her sons and then 911. The guys were on the street before the cops. May’s sons and the cops gave our block an out-of-bounds status.

While the neighborhood thrived under her careful and tender regard (she not only went after the ‘bad guys,’ she made sure no one made the mistake of leaving anything lying around to tempt, either.), there was no illusion of safety. There was instead an ethic of caring.

Living in this little town has felt, and mostly is different. Some of it’s proximity to the law enforcement. I’m likely to think that if someone stole that car it was a kid. The fact that the car was a block and a half away from the local jail would mean that savvy burglars would avoid the area. (Just keep moving.) Too many cops.

Still, feeling safe is something to aim for. Now there are always going to be reasons some people steal. Drug habits are expensive… Life for some is just too challenging. But some of the reasons people steal need to be eliminated. Kids need to be fed and clothed and housed… we need to make sure there’s money for that. Don’t talk to me about entitlement, talk to me about what kids need. People need work. We all need community built by trusting friends and Gramma Mays. And, as Mr. Marley taught us a long time ago. No Justice, No Peace.

We can’t allow ourselves to be frightened off by life. We need to acknowledge its difficulties and keep moving toward Peace. To do less is set our goals to low. There’s a lot of hard work to be done, so let’s step up. And in the meantime, let’s be realistic. However, I’m not bringing my shovel in. Peace. and keep my friends in your thoughts as they adjust to a new normal. 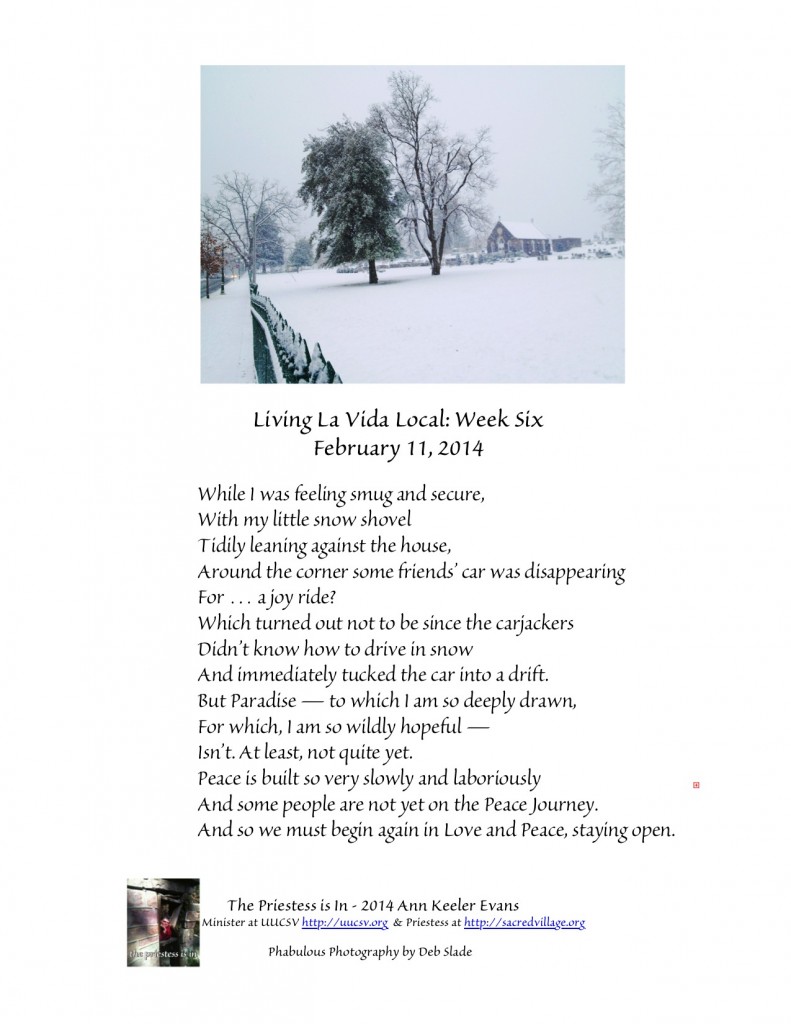