I have a very mixed relationship with my pride in my country. or really in any group. I’m very happy to be an American. It’s shaped me, made me who I am. There are many opportunities here. At the same time, there are many things we don’t do well, and I worry we’ve stopped trying. And blind nationalism scares the hell out of me.

But you don’t spend a lot of time in a small country without beginning to see how some sense of national pride and unity changes and strengthens you. There I am, back and forth, one foot and and the other. Mostly I get to ignore it. I’m not sportive, I don’t wind up in places where there’s a lot of singing of national songs. (Well other than when Hope and I sing for the elders. Then we sing them all, and they sing with gusto. It’s another way you realize how important both the celebration of unity and the singing of these songs are.)

I wonder if the national ambivalence about belonging has lead to the notion that it’s ok that we not be the ones who sacrifice. It’s fine for others to sacrifice for our country, but we aren’t asking ourselves to support that in any way… hello, can you talk about health services for returning vets? Would singing national songs change that? I don’t know, maybe if they were the right ones. I certainly think that singing in groups can solve lots of problems!

But there I was, caught off guard when the graduation ceremony started with the Star Spangled Banner. And to be truthful it’s not just my ambivalence about nationalism that makes me hesitate to like the SSB. It’s hard to sing and so many people sing it badly. And there’s this new rather lamentable (at least to me) trend to sing with so many notes that the song is obscured. But this young woman stepped out on the library steps in front of 30,000 people and sang her heart out. Simply with great conviction. The teletron was right there, so you felt as if she were singing to you. No manipulation, no over-the topness, just joy in the moment and the possibilities…

Caught me off guard. I certainly wasn’t the only one wiping tears from my seat. It was a good reminder to keep my opinions flexible. And to stay in touch with the pride, not focus only on the disappointments. Freedom of speech, willingness to question: we need these things. But Balance. it’s important too.

And of course, everything was meaningful that day, because my sweet Hannah was graduating. But I’m very grateful for the song. 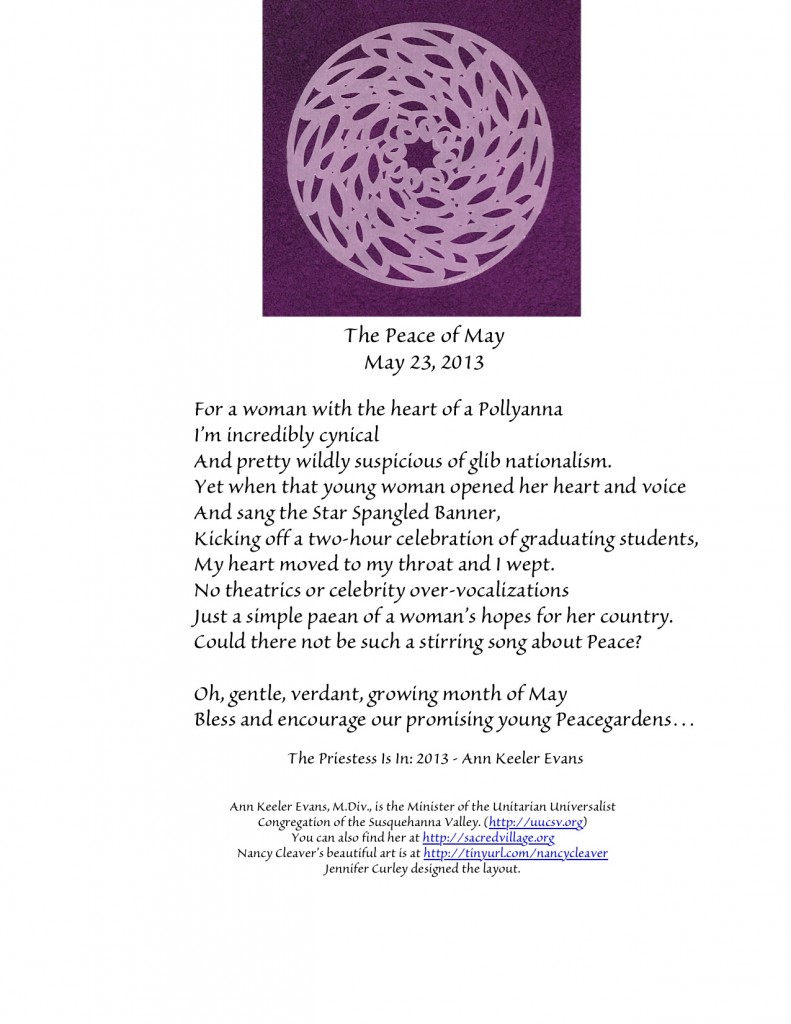