I have been with my boyfriend for two years. We’ve had our ups and downs, but we love each other and are committed to our relationship. We have one major stumbling block, though.

We are a couple of mixed race. He is a white man in his late 30s, who has not had a ton of experience trying to understand a life outside of the one he was born into. I am a black woman in the city, and I feel like my identity is tightly wound around my culture, race, and politics. The fact that we hold such different views that stem from our racial backgrounds has caused a lot of fights between us. As a result, we don’t really talk about…well…me. My background. My experiences. He doesn’t give himself a chance to get to know this part of me and what I am about. And he’ll say things occasionally—generalizations in response to a news event, for example—that I think are problematic and even insulting. It’s ignorance on his part, not racism, mind you. He likes to say that race isn’t an issue because we’re all one race, which is nice but not how it is in reality.

Otherwise, he is a fine man. He’s smart, and thoughtful, and a positive force in my life. But I feel like I am at odds with my politics and my personal background. I understand that he doesn’t want to talk about it, particularly because we fight so much as a result. But I am torn. Can you please help me?

–Rock and a Hard Place

P: Oh, how hard. On the one hand you really have so much to celebrate and on the other hand, you’re not being recognized and supported. No wonder you’re confused and a bit, if not betrayed, at least let down. I wish the solutions were quick and easy, but you know in asking that they’re not. What’s great is that you have a clear idea what’s right and strong about your relationship… that’s going to help!

So what’s first? The dynamic may be the most fixable thing. You know a lot about how you feel, although I think you could know more about what you want and need. But there are ways to get to that. I hope you live in a large city where you can find a therapist who knows these issues. If you can say what you want and need without the drama, he’ll either have to listen, or you’ll have to realize that you are not getting everything you need in relationship and then explore your options.

B: My initial reaction—and I think I would have this reaction regardless of the other problems you’ve presented in this letter—is please please please, stop justifying your partner’s terrible behavior. He’s not a racist, he’s just… I can understand why he doesn’t want to talk about it, because… Remove the justifications. He is ignorant. He won’t talk about your life experiences with you. Period.

P: Now, Terri and I, loud women ourselves, don’t ever expect to be limited to a genteel “Oh, my” when egregious and outrageous events happen in the world. Nor should your anger be limited—or worse, squelched—as truths are finally being exposed regarding race and American society, truths that you live every day, and are callous and painful.

It pushes your face, your heart, your very being into realities you may otherwise be able to look away from. Anger, Rage and Fear seem like fairly straightforward responses…

B: One of the things we tend to forget in the day-to-day of a relationship is that we need to be able to talk. Safely. I don’t mean without threat of physical violence (well, of course I do, but I always mean that. If there’s threat of physical violence get out now, because that’s an entirely different letter) but rather, with the intent to be heard and recognized. You and your partner don’t always have to agree on the topic of conversation and you don’t always have to end up with consensus at the end. But you need to be able to feel safe enough, with your partner, in your home, to make yourself heard, particularly about difficult topics that form and inform you as a person. Unfortunately, difficult talks are often overlooked in favor of general companionship (if you don’t talk about THESE THINGS, you get along just fine) or the sense of security a (generally) stable home life provides. And—we’re being honest here, so I’ll say it—dating suuuuuucks. Sometimes it seems easier to stay with the (mostly) nice person in order to not have to start all over again in the squicky waters of the dating pool.

P: I think you need to make sure you have a good support network. Get some clarity about your needs, and remember, you and he are breaking ground. You deserve for him to understand that you carry an unfair and un-asked-for burden as a result of your color and our institutionalized racism. He needs to hear you, that’s true, but you deserve to process this with someone who understands only too well.

B: It doesn’t sound to me like he is allowing you the latitude to speak safely to him in your own home. This is infuriating for several reasons, not the least of which is it’s invalidating. If he shouts you down over your statement that the black community faces different challenges than the white community, and that there’s a systemic problem, he’s part of the problem. The argument CAN be made that for him, his culture and background is important, too, so you need to make sure you celebrate that. Which is great. But he’s not allowing you to incorporate your life into his. Which is not great at all.

He can’t remove the reality of your life because he doesn’t like it, and putting his hands over his ears to “La la la I can’t hear you” into silence doesn’t change your history and experiences. And “We are all one color”, while groovy-sounding on its face, often strikes me as an irresponsible approach to the social problems that affect our communities of color. There IS a difference that people see, and react to, and make assumptions over, and kill people because of, and that hasn’t gone away. If only we were a post-racial society, then he could say that all he wants and he’d be right. And on a cosmic level, he is right. But on a practical, when-you-take-social-attitudes-and-demographics-into-consideration level, “we’re all the same” is myopic, dismissive, and not terribly helpful, at best.

It’s great that people are increasingly willing to engage in mixed race relationships. It’s a sign that things are changing. Life is different. Love does matter. And/but/however, if your beloved is not going to be part of the outrage and the solution, he’s part of the problem that oppresses and outrages you.

You can’t expect mixed race relationships to thrive without acknowledging the realities of this society/country/world. Just because you’re with him doesn’t mean that you don’t have to work harder at work to prove yourself or that you’ll automatically get a cab when you’re alone in the city. It’s no news to you that, as a black woman, you’re endangered.

B: I don’t want you to think we think he’s a bad person, or that he doesn’t love you. I’m sure he’s (generally) very good to you. But he may only ever think in terms of individuals and not be capable of looking at the big picture. It may be all he’s got. What are you prepared to do, if that’s the case?

P: He needs to start reading. And I think you should be able to ask him to go to a workshop like The People’s Institute for Survival and Beyond’s “Undoing Racism.” He needs to go, not with you, but on his own, as a man who wants to understand and support your life and your struggles, personal and political. As a man who wants to make the world better. He’ll hear things differently there.

And I think you deserve a partner that recognizes both how threatened you are and how wonderfully, ragingly powerful — and who works to change the threat and support your power.

In fact, you get to make demands not just of your partner but also of your friends. And here’s the deal, if you have kids, your kids are going to be mixed race and that means they’re going to have a rougher road than white kids. He needs to do it for any future kids as well. A quick check of stats makes that only too clear.

B: Try and imagine yourself another two years down the line. Two years of not speaking with your partner about what’s in your heart, or of hearing him make statements that are “worrying and insulting”, and swallowing the rebuttal. And another five years, and another ten. Can this status quo continue? Or will something have to give?

You’re writing a letter in search of advice, so my bet is, something’s gotta give. Not speaking to one’s truth, and swallowing responses, causes people to wither. Ann is right; you deserve to thrive. As do we all. The best relationships give us space to grow and express ourselves, not stifle who we are as we justify our partner’s inflexibility.

P: Dominant society’s not excited about shaking white privilege loose. But love demands more. I’d say I think decency demands more, but at the moment we’re looking at your relationship. Love demands your asking. Love demands his going to work.

You say he’s a wonderful man. That ought to help him let go his fears about recognizing his own racism and start dealing with it. It’s a lot to ask you to understand he’s probably afraid of confronting this, but he probably is. But if your relationship is going to thrive, if you’re going to have a chance to thrive in this relationship, if he’s going to love the powerful, angry woman that you are, he has work to do. And you are well within your bounds to ask for that work.

B: I need to say this, because it’s something that we’ve danced around during the course of this letter but haven’t said out loud yet. One of the most difficult things about love and relationships is, sometimes, love isn’t enough. Sometimes, you may love someone, and she or he may be a wonderful person in all these ways, but for whatever reasons, you can’t make it work. That may happen here. He may not be capable of meeting you where you emotionally live, you may not be capable of always having to live according to his rules. It’s heartbreaking and too bad but ultimately, that’s OK. Someone being worthy of love, and someone being worthy of your love (when taking all of you into account) can be two very different things.

P: He fell in love with you. That means he gets all of you, and doesn’t get to pick and choose which parts of you he wants to know about, or not. This is a time of turmoil and change and, hopefully, progress. I hope he wants to be part of the change. You have great faith in him. I hope he can trust that enough to do the work. 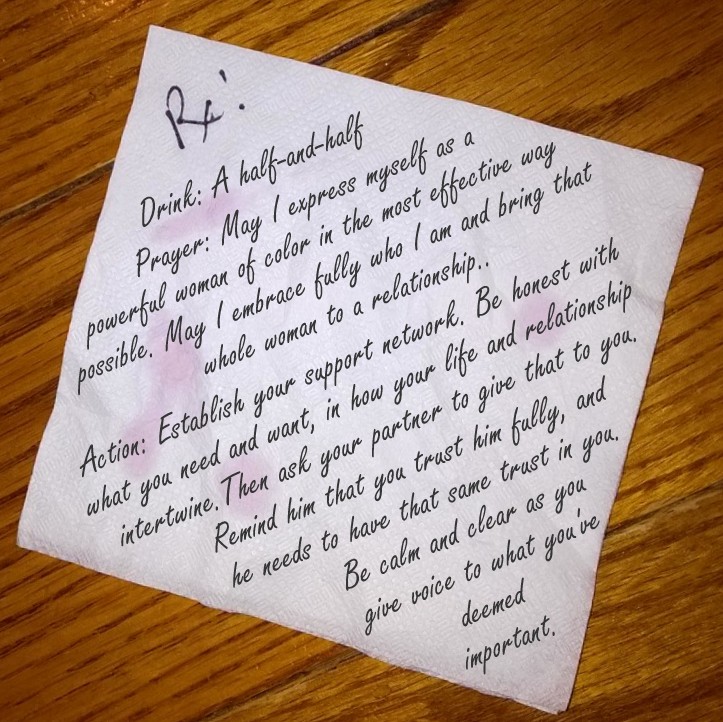 Thank you for reading!

The Bartender and the Priestess!