This holiday was always important to me, because I believed my older sister when she told me the world was not working because it was her birthday. She was an anchor in my world, so why would that not be true?

Once a year, people pull out the red, white and blue and say “Say Thank You!” And why not? Those people in harm’s way?

But it’s not an easy thank you for a woman who wishes the world were working on Peace not on controlling properties. It’s not easy when I think about who gets sent to fight wars, who wouldn’t have health care for their families without their service and who spends their lives avoiding anything like service.

It’s not easy to listen to politicians extol the value of the military and watch them cut services to Veterans. Something like 85 percent of our homeless are former military. There are huge negative impacts to “serving” the country, soldiers are discouraged from seeking help that should be part of service. Living in the line of fire and killing people, even people you believe are evil who may in fact be evil… these things are not good for your soul. The physical extremes they endure mess with their bodies and their minds.

So my Veteran’s Day prayers are mixed. I pray in thanksgiving for those who returned and those who sacrificed. Those who made difficult moral decisions to serve in other ways. I pray that we make a different homecoming for those who served, that we demand better for them of our leaders and ourselves, that we make a space and a place, that we fight for their Peace as they volunteered to fight for ours… I pray that we begin to speak up, act up, think up about ways to promote Peace… not to avoid war… but to move toward the joyous possibilities. I pray we will be kind to one another we who are on such different sides of this confusion. I will pray for the safety of the men and women (no longer boys and girls) in service and that their sweet and beating hearts may never have to take another’s life.

And in the midst of it all on this Armistice Day, this remembrance of the War to End All Wars that Ended Nothing…

I also remember that it is my sister’s birthday. And she is no longer with me. And my heart is still tender with loss. 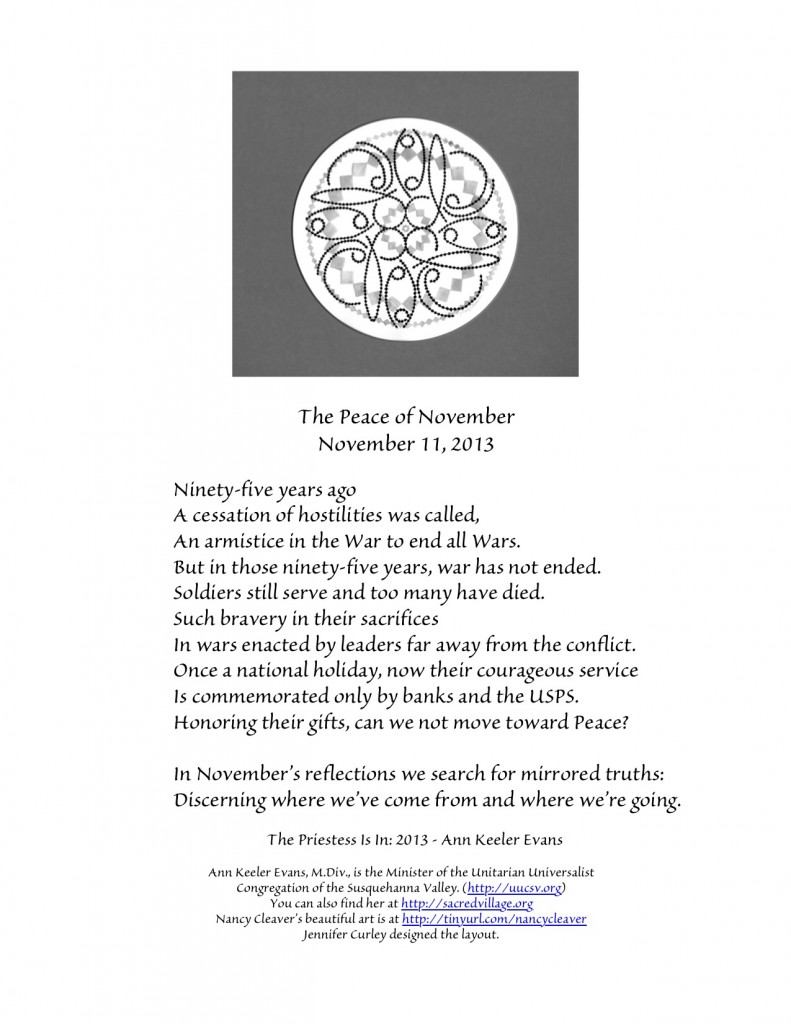 One thought on “Veteran Peace”