I’m not sure what I expect from you, but I feel like I need to get this off my chest. I’m just so taken aback. And angry. Okay, really angry.

I love dogs. I’m a dog owner and have always been a dog owner. Every dog I have ever had was socialized and well trained. Every dog has had up-to-date shots. Wherever you live, these must be the minimum requirements for being a dog owner. Dogs are not status symbols; they’re meant to be companions. But that means you have to be responsible.

In the last two months, I have had two friends on bicycles bitten by dogs, neither of which was contained in their yards. Luckily neither friend was badly hurt, but one had to have rabies shots, which are wildly expensive and painful.

I was with another friend, who was walking her dog very properly, on a leash, in a public park, when another dog, also on a leash but far larger than the elderly couple who owned it could handle, pulled away and savaged my friend’s dog. Their careless son got himself a big muscular dog, then got a job in the city, and foisted Bowser off on his parents. If they’d ever wanted a dog, I can’t imagine Bowser was their first choice. They wound up paying a lot of money in vet bills.

None of these dogs had been trained. And Bowser is just one more dog, completely unsuited to people without a massive amount of upper body strength and the willingness to work very hard to turn him into a family pet.

This deliberate carelessness leads to people who are devastated because their beloved pet has to be euthanized — and who are clueless that it’s their fault. It’s a waste of wonderful animals who could be companions to the right people, but will never be, because people confuse training with abuse. People and pets are injured because these poor animals have not had responsible pet owners. I think not socializing your dog is mistreating that dog.

Fed up with Status Dogs and Lazy Owners

B&P: I’m not sure what more we can say here because I think we’d just be adding our voices to your chorus. But you know, being a chorus for reason isn’t necessarily a bad thing.

B: Dogs can be wonderful. They can be, of course, faithful companions and a surprising amount of help, a source of love and comfort and security. But they are animals with limited reasoning capabilities, and they need to be trained. From day one. By owners that can clearly be in control of the dog; they may be limited in their ability to reason but they know when their owner isn’t actually in charge. Otherwise, they act according to their doggy will, which may be friendly or aggressive or aloof or high-strung or bitey, as their inherent doggy temperaments will accordingly predispose them.

P: While I like dogs, I don’t have them, because I know that I would not be a good dog owner. I’m not interested in taking the time they require to train and the attention they deserve when you bring them into your life. People look at a darling puppy, or even a jaunty senior and think, that dog is going to love me. That works about as well as having a baby when you’re a teenager. They may love you, but they require a lot of hard work to be good companion animals and good neighbors and citizens.

B: What people either fail to recognize or ignore outright—what I think about this depends on the day, sometimes the hour—is that when you take in a pet, you generate a sort of contract with that animal. You’re basically saying to that animal, I’d like you to live in this home. From you, I expect companionship/help/adorable YouTube videos, etc. In exchange, I’m going to do what I can to take care of you, including making sure you are either A) socialized into the society I live in, or B) in a cage/behind a fence if your socialization can’t be properly executed. It’s why you need to keep pet rats in a cage (can you blame the stranger on the street who would hit it with a rock, if it got out?) and also why wild animals like chimps and tigers make bad pets (they can’t be fully domesticated).

P: Much of my job, far more than I ever suspected, revolves around building community. Humans live well in societal groups. We feel secure; we can be more welcoming; life is better when we have a community around us. That means we have to live our lives aware of our neighbors. If we’re going to have pets, they have to be part of that communal society. One person’s right to have a dog is not larger than your neighbors’ rights to be safe. You can have a dog but the dog must be socialized. And most of them are trainable. But you don’t get to have a wild or aggressive animal.

B: What this explicitly does not mean is that you should be so cavalier/uninvolved/negligent/incapable toward a pet that it becomes a public nuisance. The bitey dog that chases bicyclists will only get so many strikes against it from the public health department before the dog warden will show up to take that animal and destroy it. Not through that animal’s fault. Through the owner’s. They’re the ones who violate the contract when they are careless with their pets. It’s kind of the same thing with people who are neglectful toward their kids, and let them run wild.

P: Right, Terri, it’s interesting that neither of us have dogs or children. We’re keeping other contracts. Because we like dogs and children, we didn’t have them — because we were not interested in dedicating the time they would require to grow up to be healthy, loving, contributing members of our families and communities. We enjoy other people’s dogs and children, when they’re enjoyable. And we’re likely to be fairly clear about our boundaries for acceptable behavior and require it. Because we’re who we are, we often get the behavior we expect. However, it’s not our job to be there because you don’t do your job.

Serendipity being what it is, I just had a conversation with a wedding couple who have a disabled dog. An untrained, un-vaccinated, too big for the owner, large dog tore up this little Pekinese. The Peke lost one eye, was blinded in the other, is now deaf in one ear, and lost a leg. And the Peke’s owner was bitten trying to save his dog. “Hey, dude, he’s a big dog,” is not taking responsibility for the dog’s behavior.

B: Nobody—and I mean nobody—wants to live near the wild kids or the bitey dogs. Conscientious household stewarding involves recognizing the rights of your neighbors to be unmolested or live in constant worry of dog attacks. If you don’t want to tend to the dog and even want it to be bitey, then you’d better make sure you restrain it at all times. Make sure it’s always on a leash that’s being held by someone strong enough to hold it, and build a fence for your yard. Thoughtful dog training makes for better neighborhoods. It’s not funny—it’s divisive, it’s scary, it’s expensive, it can be fatal—for a dog to be allowed to run at will and bite. Dog owners, do you want to be that person? If you’re going to agree to take in an animal, then abide by the unspoken contract, and act in that dog’s best interests. The dog only knows what it’s taught; dog owners, it’s up to you to fill in the rest so the dog can function in our established society.

P: And when you don’t do the work you should have done, societally minded priestess that I am, I expect a couple things to happen. A) I expect you to take full responsibility (that means both an admission that you animal was out of control, acknowledgement that you were lax in training, and provision for financial costs incurred by your animal.). B) I expect you to make a sincere apology for their missteps. C) I expect you to take your dog for training.

B&P: We don’t know that the people we’re talking to will be reading this, but we hope at the very least we can empower more of us to speak up. Don’t let bitey dogs win. Demand training and ask to see the evidence. That makes you, dog owner or no, a good citizen and a good neighbor. 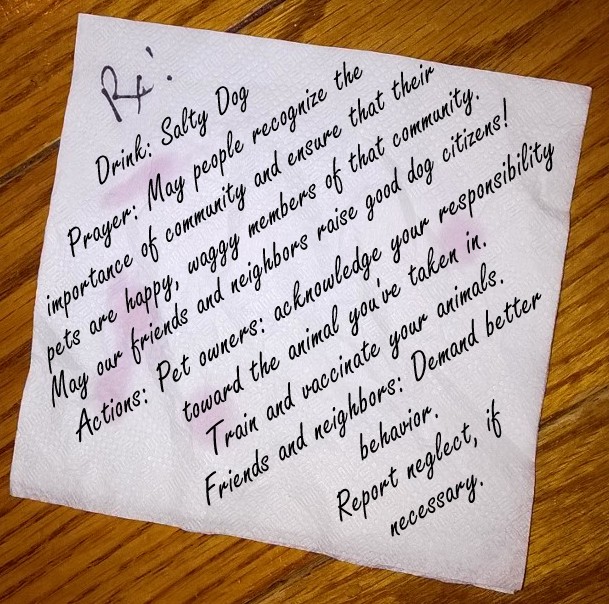