My husband and I recently went to our granddaughter’s softball tournament, and got to witness some appalling behavior on the behalf of the opposing teams’ coaches. Both coaches, from both teams.

One coach got up into the umpire’s face because of a call. This normally doesn’t happen and is certainly not permitted, and it caused a 30 minute delay in game. A mediator had to be brought in, and the ump’s original call stood. Then the opposing team’s coach caused a fit over a requested rain delay, which was not granted. To me, it felt like bullying, and it destroyed the spirit of the game.

I understand that winning is nice, but winning at all costs worth it? I thought their behavior was inexcusable. And how do parents and grandparents manage this? I have a 12-year-old granddaughter, and I don’t want this to be her main impression of what to expect from team sports.

~~~The Bartender and The Priestess respond~~~

I’m not sure when children’s local sports slipped from something kids do to the most important thing in the world. Sure, there have always been notably irate parents but they were fewer and farther between, if only because social strictures were stronger.

Disclaimer, I don’t do sportsing and neither does my beloved Bartender. We do things for our health, and we may watch them on tv, but game sports are not my field of expertise.

Bad manners? Bad child rearing? I think we’re ready to talk about this.

B: Critics of team sports—while generally looking at manly sports like football and hockey and such—point out that they are, in quite a few startling parallels, much like organized warfare. There are distinct sides, identifying uniforms. Sports involve strategy, Us v. Them, and can even—especially at the end of a tournament—end in militaresque victory parades. If you don’t believe me, watch the Olympics and tell me that’s not a way for countries to deploy against one another in a socially acceptable manner.

I mean, hey. We’re still basking in the glow of the 1980 US Olympic hockey team’s surprising defeat of the USSR’s Central Red Army team. If that wasn’t a thinly-veiled war game, I don’t know what was.

I don’t oppose organized sports. I even love some of them. But it’s easy to see how they can knock a participant over the edge and straight into fanaticism. “Winning isn’t everything; it’s the only thing,” isn’t that right? That’s been floating around in our public consciousness since it was first uttered in 1950. (Fun fact: NOT said by Vince Lombardi but rather, by UCLA football coach Red Saunders. Take that, misattributed quote promoters!)

P: So, to start with: in my opinion, sports are a great way for kids to figure out the way their bodies work, to learn to follow directions, to learn to strategize and to learn to collaborate in achieving their goals. And it’s probably not a bad thing to learn a bit about friendly rivalry. As when you start to do anything, especially if you’re going to be good at anything, you’re spending a lot of time being gloriously bad at things. When you have to learn so many things at once, there are so many ways to be bad.

Still it’s a thrill to play and a thrill to get better. Look, arms and legs all headed in the same direction YAY. Look, ball successfully arrived at another kid, WOW!

Now something we learn in this process is that not all of us have what it takes to take our particular sports world by storm. Young dreams aside, few of us are going to be the best athlete in the world in our sport. Yep, actually a really small percentage. A modest number will grow up and become really competent. So that leaves a lot of other kids to learn about running and team work and cheering people on.

B: You’re right in worrying that “winning at all costs” is problematic, since learning how to lose graciously is part of becoming a fully functioning adult. It’s, sadly, something the battle-coaches you talk about failed to teach their charges when they had the opportunity. The world doesn’t always conform with the outcome you want, and kids need to learn that that is OK. Losing a tournament shouldn’t result in tantrums. It shouldn’t end in personal recriminations. It doesn’t make a child less of a person if they don’t win a softball tournament. It doesn’t diminish their ability to draw or do math or play piano or bake. It just means they didn’t win a softball tournament. Life will go on.

B: The one bit of relief I find in this letter is that the writer doesn’t implicate parents in being the sports-crazed bad seeds. Honestly, since the perpetrators of bad behavior were opposing team coaches, it makes me wonder (reading DEEPLY between the lines) if there isn’t a personal issue between the two of them.

Now, they may have learned how to coach from watching too many film clips of coaches kicking dust on an ump’s shoes, and you may have had the misfortune of getting two people with severe anger management issues. And any reason for petulant behavior like that is inexcusable. But you may have—let’s face it, mostly likely have—been witnessing the expression of issues that have nothing to do with the game at hand. Maybe the coaches were romantic rivals. Maybe they’re former lovers. Maybe it was a perfect storm of bad juju, and Coach A just had a fight with his/her significant other while Coach B was fighting a vicious toothache. Or maybe they’re narcissistic win-hounds who will wear sackcloth and ashes if they lose a game. Bad blood will out. The kids, and the game, bore the brunt. Regardless, shame on them for engaging in an “I am the squeakiest wheel!” method of coaching. 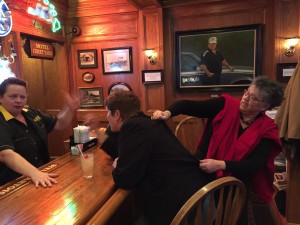 P: Let’s talk about their lack of courtesy. Oh, what a disaster. Lots of towns are adopting courtesy codes. They should be urging them on the sports organizations. Sports organizations should be examining their mission statements. They should have pledges anyone, any adult, involved in the sport should sign. And there should be penalties. Although the importance of winning is certainly emphasized over playing, just about everywhere in life, isn’t it? So maybe it won’t matter to a parent if she/he is banned from ever watching their child play again as long as, by hook or by crook, they win a t-ball game. Are we ready to give this up and be neighbors, friends and oh, by the way, parents? Because this is immature, self-indulgent and distasteful.

B: I want to eliminate the word “bully” from this discussion. I appreciate your awareness of the problems that come from bullying and thank you for being vigilant in opposing it and its negative effects. But all bad, mean-spirited behavior isn’t bullying, and I don’t want to water down the meaning of that word. The coaches in question weren’t aggressors going after a target they perceived to be weaker; they were peers battling for supremacy. Pissing contests are not bullying events.

P: Bullying may be too easy a catchword. The Bartender and I just indulged in a sidebar argument. We reached no permanent agreement other than on the fact that it’s stinko behavior. She thinks the way the stinko behavior gets expressed is a personal issue, I think it’s a permission issue… I think it’s a threatening temper tantrum without regard to who’s involved… with regard only to whether we win, win, win. It’s a ridiculous use of power and privilege. I wish the only people doing this were just these two tantrum tossers. I wish it weren’t soccer moms and dads (and football and base/softball and wrestling and all) (and sometimes grandparents — good for you for calling this out!)

B: US Supreme Court Justice Louis Brandeis famously wrote that the remedy for negative speech is “…more speech, not enforced silence”. You (and her parents) need to talk to your granddaughter, get her to explore how she felt about it, guide her to understand that sometimes, adults act irrationally and none of that behavior was acceptable or should have been perpetuated at her and her team’s and her opposing team’s expense. It should not have been endured, nor should it be emulated.

Then model the behavior you do want her to emulate. Gather together for a family game of softball. Have a pepper game in the back yard. Get some board games, play Risk. But undertake these actions with the idea that you will all participate in these games for fun, and for bonding purposes, with all ego left at the door.

P: Parents? And grandparents? You have a couple responsibilities. You need to get the kid to team practice and to games and to spend some fun time kicking, throwing, batting, something-ing around the ball in the back yard with your kid. It can be great bonding time. It can be a fun memory that your kid can look back on and say, “wow, my mom/dad always had time for me.” (That can happen even if you’re really bad at the sportsing thing. Just keep the glove in front of your face or the mask/helmet on!) You need to recognize that a game is just a game and that your kid may just be a kid who needs to have fun, and that this is helping your kid become confident and competent. Maybe your kid is a freaking sports miracle; acting like this, you can hopefully help her/him develop teamwork, camaraderie, and self-discipine in the process of sorting out his/her arms and legs and developing brain — Because of course discipline matters immensely in developing genius.

And if your kid is not a sports genius, you can still offer to play catch. Or go and cheer. Or float down a river on some inner-tubes and relax… 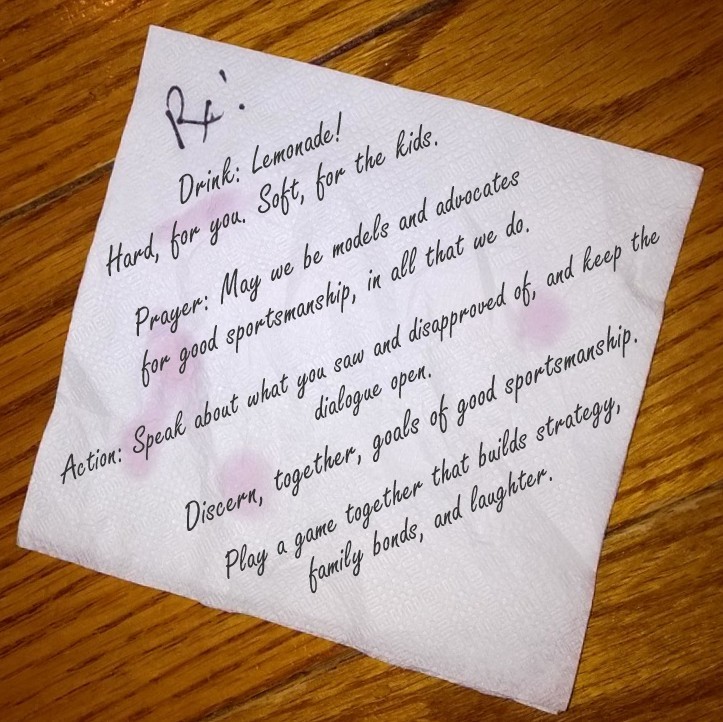 As always, thanks Deb Slade for the Phabulous Photography. And Jean, thanks for playing along (and being a good sport!).