I have a real problem with my older sister, and—finally—I’ve gotten to the point where I am over it. When we were little, my sister “Ethel” constantly insulted me. She would call me names, make fun of my weight, point out every pimple, tease me that the boys would never be interested in someone who looked like me. Ethel would come into my room like it was her own and rifle through my closets, helping herself to my clothes and shoes, or she would take my CDs and “lose” them, or she would slip my favorite lip gloss into her purse and “forget” to give it back to me.

Ethel has since moved several hours away. I still live in the town we grew up in, and I only see her when she visits our parents. Now that we are adults…well, I want to say we get along better, but we don’t, not really. Adolescent teasing has given way to adult nagging, as though she can make me thinner/smarter/wealthier/with the right guy.

I’m in my early 20s, live independently, have a nice career underway, own my own house, own a car, have a good group of friends who support me instead of trying to tear me down. I like who I am and what I’ve achieved so far, but my sister thinks I can do “better” and won’t hear it when I tell her I’ve had enough, so I keep my distance.

My parents, of course, wish we were closer and have asked me to try, try, try. They don’t hear me when I say I’ve had enough, either. I have no interest in being her friend and having girl-dates with her when she’s in for visits. I certainly don’t feel like I need to go see her and be alone with her on her turf. But I don’t want to be disrespectful to my parents. Should I suck it up and keep trying with Ethel? Or is it OK to keep her at arms’ length?

B&P: Before we say anything else we want to say, congratulations for getting your life together at such a young age. You’ve made good plans and grown into them. Whether or not your sister and your family can acknowledge your accomplishments, be very proud of yourself and keep building a community of friendship and support even as you build your dreams.

B: Ahh, family. Despite the Norman Rockwellian images of family we like to conjure up—gathered around the turkey, bright smiles, warm gestures, no drama—it’s often a minefield. These are the people who have known you the longest and, ironically, may not know that much about you. They may not know your political affiliation, your current job title or your favorite ice cream flavor but chances are they are intimately acquainted with your emotional triggers.

There’s a profoundly sad moment in the movie Home for the Holidays, that I think will help explain your feelings. The two sisters, constantly at loggerheads through the film, finally have the conversation that gets to the root of their problems. It goes like this.

Claudia: You don’t know the first thing about me.

Joanne: Likewise, I’m sure. If I just met you on the street… if you gave me your phone number… I’d throw it away.

Claudia: Well, we don’t have to like each other, Jo. We’re family.

And therein lies the problem. You’re family, and you’re stuck with each other. And it can be hard to continually justify why you’re spending your valuable time and energy with someone who does everything she can to make you feel bad about yourself when your carefully cultivated, friendship-based, supportive urban family who genuinely likes you is just a phone call and a quick escape out the back door away.

P: Oh, this is so difficult, I’m so sorry. It seems that not only is your sister toxic and has been for a long while, but your parents also seem to have been indifferent toward the pain this causes you — and the disruption this ugliness causes in the family. Their expectation that you, who are picked on, should be the person who can, never mind should, make the situation better is a sad indication of their cluelessness. I give them the benefit of the doubt and assume they are not actively mean, but they have certainly been passively mean.

B: Normally, I am an advocate for cutting one’s losses and stepping away from any sort of toxic relationship—partners, friends, co-workers if you can manage it (though that does get more difficult). If they’re bad for you, develop an exit strategy, and go. However! Family—and one’s nuclear family in particular—does have its own set of rules. Cousins? Cut ‘em out, let ‘em go, how often do you see them anyway? Aunts and uncles? Easy to create distance. But a sister…

Yeah, that can be tricky.

P: Terri and I talked a lot about how you didn’t focus on your sister, but rather on your desire not to be abused by her. Congratulations. Because you can’t fix her; I’m not sure you’ll be able to talk to her about this. You’re doing the work you need to be doing for yourself: you’ve got work you like, you own a house, and you have good friends. You’re building a life. If you read us, you’ll know I’m a huge fan of getting the support you need. If you don’t have it in your social circle, pay for it. You need to figure out what role you play in your family and the ways you are and are not willing to keep the family working. If you want to maintain relationships with your parents and sister, or create new ones, talking to a professional who can help you determine a course of action is a good thing. Maybe that person will have suggestions for new tacks to take with your sister, or your parents. There’s nothing like a little rehearsal before you try new tactics. Afterwards, with your therapist, you can even allow yourself the opportunity to debrief.

If I were you, I would also be disappointed in my parents’ response now and over my lifetime. In a way, it sounds as if they see you as capable and mature, but it doesn’t sound as if they see her as mean and hurtful.

B: UGH! Pet peeve alert! It’s almost as though you’re being punished for being strong. Why do you have to take her abuse? “Because you can” is not an acceptable answer. Sorry. Had to interject.

P: They are not protecting you from her abuse. From your description, your sister’s actions are verbally and psychically abusive. Your parents’ failure to stand up for you deepens that abuse. This is another place a counselor can help you. You don’t want to confront everyone and everything too early as your work on this because that can really blow things up. You need to figure out how to make your family hear you, because so far what you’ve tried has not served you well, but you also have to guard against them becoming defensive and turning on you. You don’t want to let any of your family members tarnish your life and your very real accomplishments.

B: You never mention whether you spend any time alone with your sister when she’s in for her visits. Have you ever, one on one, sat her down and told her how you feel about her behavior? Or have your exchanges been more like: dinner table à she insults you à you eyeroll and tell her to knock it off? That’s an adolescent pattern reasserting itself, and if I were your parents I’d have a hard time seeing it as anything other than the behavior you’ve always engaged in. Maybe you should try taking her out for a cocktail, or inviting her to your house—alone, no parents—to have a long-awaited chat. And tell her, without drama, that her criticisms hurt you deeply. They make you put up walls against her, which then hurts your parents. Try saying, “I expect you to treat me like the adult I am, because I feel like you still address me as though I am 12 years old and you’re the big sister who knows better, instead of the peers we’ve become.” Try NOT to say, “Knock it off, Ethel! You’ve always been so bossy.” Those two sentences are worlds apart in terms of gravitas. Because people, and women in particular, are notoriously bad at actually asking for what we want (because who wants to make waves?), you may want to practice saying what you need to say to your sister in a mirror. Practice makes perfect. Then, the next time she’s around, actually say it to her.

If that doesn’t work and she doesn’t let up…at least you’ve had your say, and can claim that you’ve tried to build a bridge with your sister. If she continues to harass you over your appearance or what the heck ever, don’t engage in that conversation. It’s a common mistake people make, thinking they have to comply or reply to the questions put before them, instead of saying, “I’m done having this conversation, and am moving on.” Give yourself some control of the conversation. Simply remind her that you’ve already asked her not to badger you any longer about personal issues, but you’d be happy to talk to her about the latest movies playing at the local megaplex. I’ll back you in saying that it would be fine, after that, to maintain your arms’ length relationship with Ethel. Be polite, pleasant even, when she’s around, and then slip out the back door as soon as you can to meet up with the friends who support and nourish you emotionally.

P: Whatever you do, remember that you have choices and that exercising those choices will give you power. She may continue to bait you. But you don’t have to play. It’s a sad thing if she does, but that will be her choice. It might be helpful to plan some fun things around necessary family visits — channel yourself some good old Mary Poppins and her spoonful of sugar — not only does it give you something to look forward to, it also gives you a time when the visit is over. One thing you want to be sure about though, as you reduce your sister’s influence in your face to face conversations, you want to ensure that she begins to take up less time in your life with friends. She is who she is. I’m not saying you don’t get to tell stories, but you don’t want to waste your time reliving the discomfort. 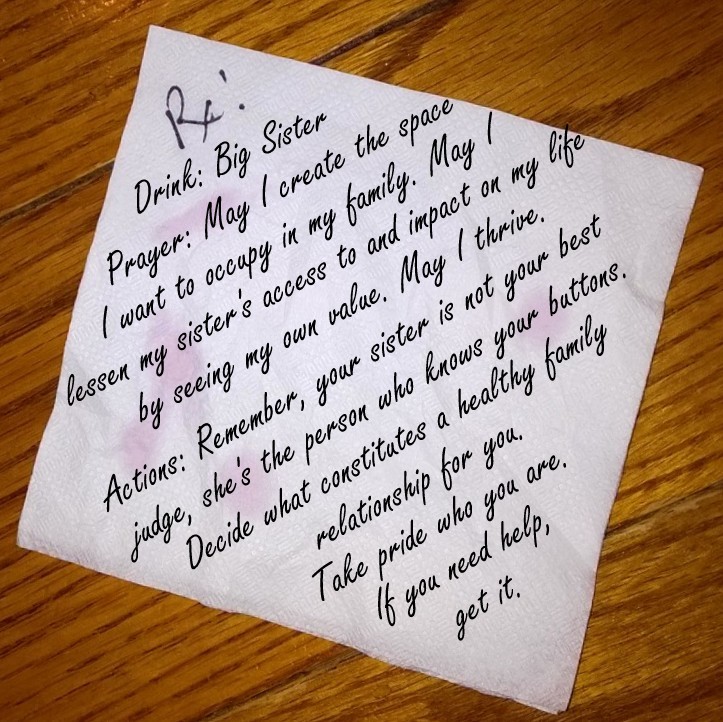