There’s my brother and his family and my family who remember our family’s festal foods. Most of them keep the holidays a bit differently than Deb and I did… And now with Deb and her family gone, Betty and Sam gone, and my not needing several tins of cookies with only Steve and me to eat them, my holidays look different than they once did.

I miss making cookies with my mom. I miss making them with Deb. I miss the smell of the house as the different cookies bake.

This used to be the saddest puzzle. Now it’s simply a puzzle. What do the holidays look… and smell… and taste like… at my house? To tell the truth, I don’t hunger for the sweet stuff. I hunger for the memory.

I think Festal Foods matter. I believe they bind people together… I don’t know what they are right now! I don’t even know exactly who my family is.

Trust me. There are worse things! Eating my way to Peace! Binding hearts in Peace. Holiday Hurrah! 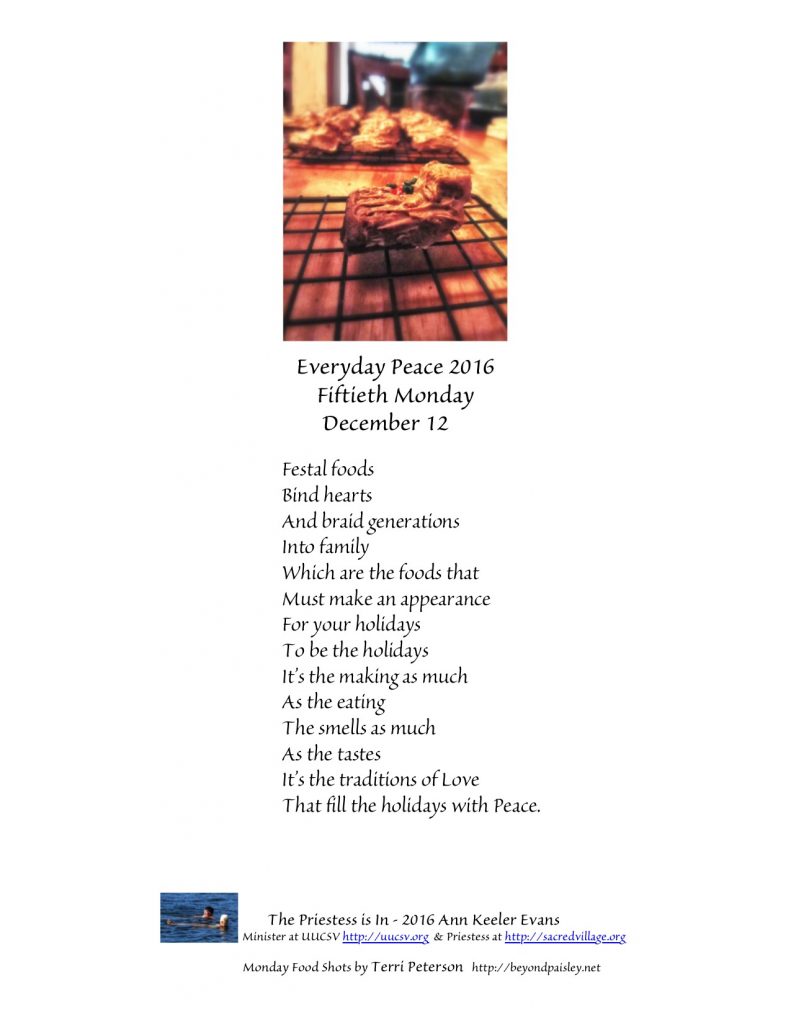 Food is important in so many ways. Certainly for the sustenance and nourishment of our bodies. As a nation, we don’t eat well. We don’t nourish ourselves and create comfort foods from things that are healthy for us. We’re still creating comfort foods that were good fuel for people who worked on farms and in factories rather than foods for folk who sit and think and push buttons on machines. There’s work to do on that.

But food doesn’t just nourish, it carries Ceremony and Memory as well. There are special foods for different ceremonies and occasion. So when we gather we make this dish or that. When eat a festal food, we remember all the times we gathered. It’s so powerful.

Case in point? A friend just told the story of a woman’s posting about her mother’s cinnamon rolls on FB and the whole family chimed in. We remember. Granny, the comfort and the taste of warm cinnamon and bread dough in our mouths.

These days, we eat treats all the time. Very little is special. We had snacks growing up, but they were saltines with peanut butter on them. Desserts were carefully limited, at least at my house. Leftover habits from times (like the not so far away war) when sugar was in short supply and not so cheap. But now sugar has become a mainstay and there’s nothing special about it. The really bad thing about this is that sugar is not good for us. We need to eat it sparingly. A treat needs to be just that. Something special, something very closely held. A world of instant gratification is not excited about this.

So how do we have festal foods? Foods that we eat only on special occasions? Maybe each month should have a food celebration. Maybe some of them could be healthy. The First Asparagus of Spring, The First Tomato of Summer. The First Peach.The Cookies of the Winter Celebrations. The First Baked Potato of Fall. By withholding and then elevating those foods become longed-for treats.

And then? We will remember them. I’ve heard arguments both ways as to whether sweets are the things we taste best in old age, but it’s true that they satisfy. Mom was so happy when I would come with something special. Something deeply darkly chocolate or richly creamy. mmmmmm.

And she would smile at me and we would cuddle. We did it more often because there was little she could revel in. It brought such pleasure to both of us. I had a long sad time period of people’s dying. And I was very clear that I would eat with them the foods that nourished not just their bodies but their souls. They were leaving their bodies soon, and their bodies were betraying them. But their souls were still lovely things.

End result for me, a lifetime of memories and and extra 25 pounds. So now my job is to lose that 25#…. And occasionally, to have a celebratory panna cotta and remember her.

Making Peace with both Life and Death — appreciating the comfort that food can offer the dying and the bereaved. It’s a wonderful thing. Peace be with you. Eat wonderful food. Eat festival foods sparingly and good for you foods with abandon. We are so lucky. Peace.

This time of year there are so many memories. Not all of them are wonderful. Some downright not-so-great. But others are grand. Life, eh?

But this time is filled with more than memories of activities; it’s filled with festal foods. Not all of them are wonderful. Some downright not-so-great. But others are grand. Food, eh?

In the same way that I get overcome by the flurry that is the holidays, I can be overcome by the sheer volume of foods shoved our way. My balance lies in finding the foods I adore and keep for this holiday. (Isn’t that what that phrase “keeping Christmas” really means? Keeping the things that belong to that holiday to that holiday. But people wear themselves out, they throw more and more expectations on tiny little holidays that bend and break under the pressure.) Ponder in your heart. Savor in your mouth.

What tastes do you savor during the Winter Holidays? What little luxuries make your mouth and your heart happy? What are your festal foods?

Whatever holidays you keep, may you keep them in joy and love and savor the tastes that make them rich for you. It’s time to give yourself Peace during these wonderful, treacherous days. It’s time to give the world Peace. Here, have a cranberry orange cookie. My sister and I perfected the recipe. Peace in your hearts (and in your mouths!), my friends!

And in the meantime?

Alternative Advent – December 18: 1¢ for every song on a mobile device in your family. 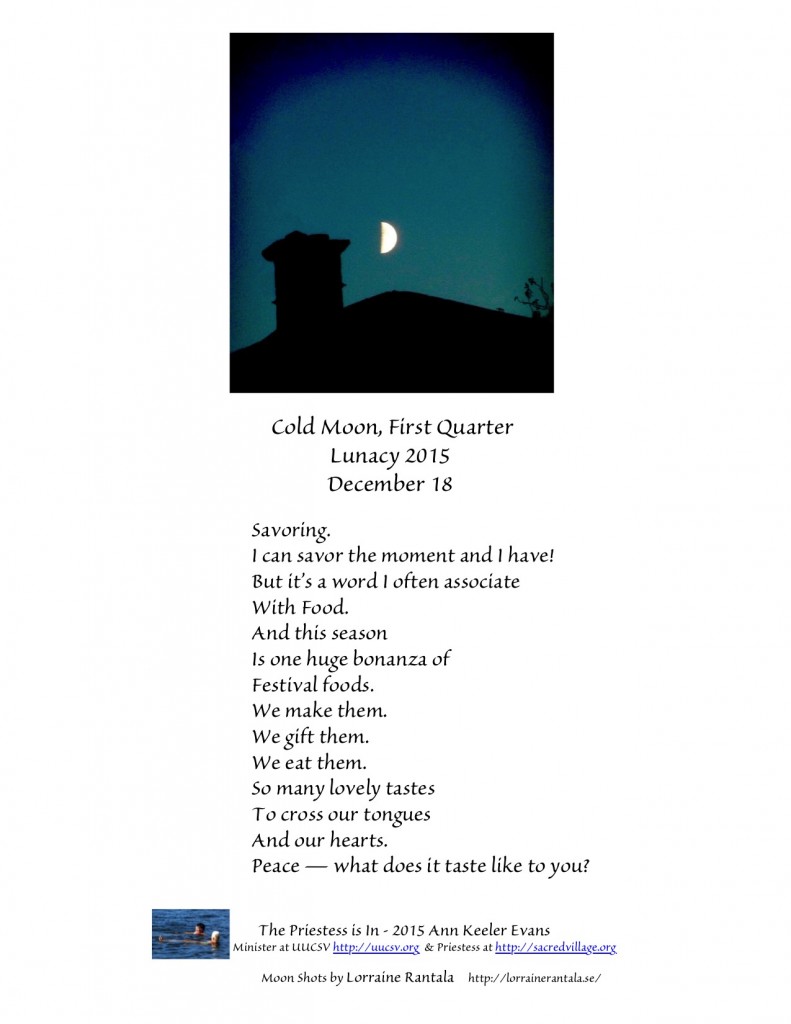