I live in a Valley that takes its fireworks seriously. Driving home Friday night there were fireworks dancing behind every hill.

I find it thrilling. I always have. It’s a family joy. I have a very early memory of being in a courtyard and seeing them reflect off windows. My mother enjoyed them well into her Alzheimers and dimming eyesight.

Once we established that they didn’t actually have roots in bombs, my husband has tried to like them, but frankly I think the fact that they’re set off arhythmically bothers him a lot… he can’t beat the time to a bunch of humans with matches.

But that was as far as I had thought.

Well, I knew I wasn’t a fan of the gunshot in Oakland, aside from the fact that it’s just noisy and not beautiful, there’s that old what goes up must come down problem with bullets. eeeesh.

But now I’m hearing more about those who suffer with this past-time. First it was the pets… and you can’t explain much to them. Then it’s the wildlife, and you can’t explain anything to them. And then it’s slowly making the connection about the fear this causes PTSD sufferers who can get thrown into flashbacks. And sensitive people for whom the noise is assaultive.

All the farther I’ve gotten is that perhaps there should be a rolling celebration in areas like this where there are NOT fireworks so that as towns celebrate, there are safe places to go. Seems like the Veterans and the Veterinarians could sponsor that: the Vets for Fourth of July Quiet… Maybe we need to do what they do with Halloween and trick-or-treating and allow one day in town and prosecute vigorously those folks who set off the boomers randomly in towns.

I don’t know if there’s a safe middle ground… but it seems as if we should try to keep Peace and Celebration for everyone… I don’t know… am I just reluctant to give this up? Ah… well, it’s the Sabbath… i hope your thoughts are less involved than mine. That’ll stop soon. I’ve church and preaching with poetry before that and I’ve friends arriving whom I haven’t seen for a year. Yay. 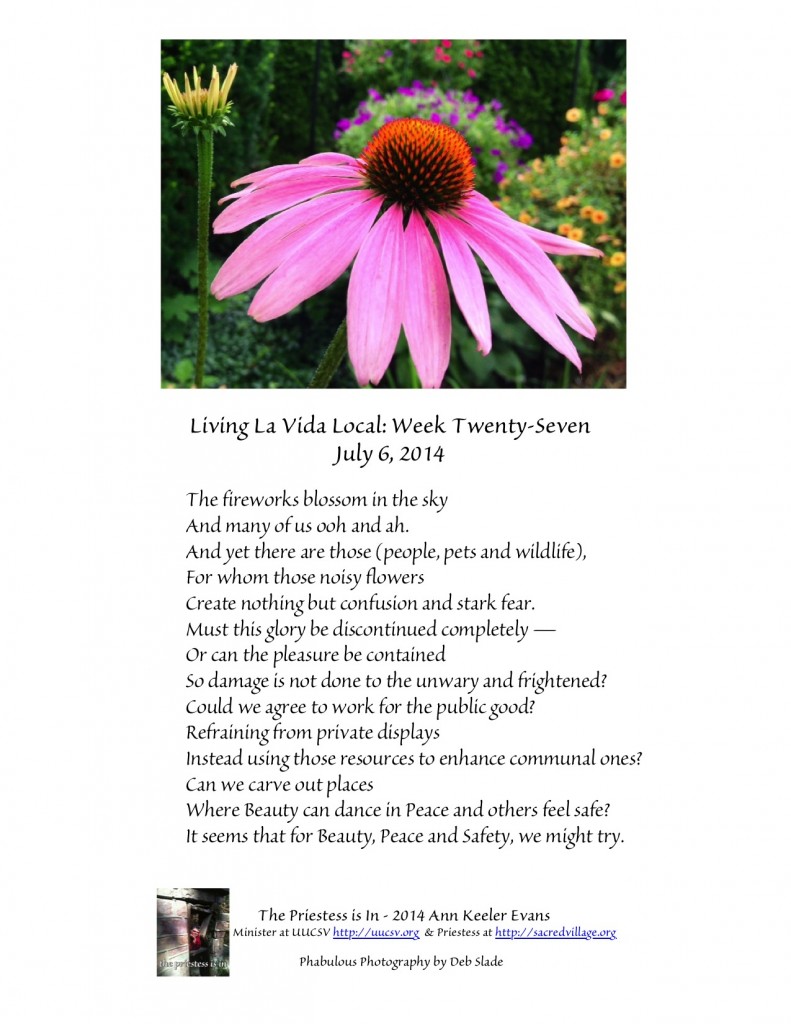