Some of us had never been invited, because our traditions weren’t understood as part of the fabric that held our community together. It was never malice that excluded, but the reality was there was just no space, not even a consideration of space. Some of us, who were invited, never felt comfortable going, because our sisters were not invited. For most of us, the project of taking on such established institutions was daunting and it’s always better to be known as standing for something rather than against. Many of us shifted from foot to foot as the National Day of Prayer approached.

This year, a group of us had been gathering. A group of women, united not by the same faith, but by the disciplines of faith and the calls to leadership, had been meeting for coffee and conversation. We recognize each other’s work and challenges. We’re coming to know a bit more about how different faith traditions impact those two things. We’re laughing a lot, and our deepening friendships and collegiality, and oh, yes, support, improve and deepen our ministries. And laugh. Where two or three (women) are gathered, there will laughter be also… even if there are tears.

So, here came National Day of Prayer and the chance to add something to our community rather than distract. We decided to undertake a Prayer Vigil. We handed out assignments, I asked my friend Jen Curley to design a logo and we made pins so we could look official Then we invited our communities, gathered and prayed. First Annual. My friend says if 6 people come it’s a success. We had 3 or 4 times that many, and at least that many again of Women’s Interfaith Clergy Group. Prayers, poetry, and prose were read. Songs were sung. Silence was maintained. Gongs were sounded. Cookies were shared. Peace was sought; and indeed made. Next year it will happen again, may the weather always be as lovely. We’ll invite more people.

We also invite you to pray for peace, for 5 minutes every day during the month of May, sometime between the hours of 6 and 7 pm, knowing that people of different faiths and traditions are doing the same. May you pray with some question about what you will bring to the Peace process. And then may you put your prayer to work in the world. Peace. It’s in our hands, hearts, minds, souls… Let’s get it out into the world where it belongs.

Hooray for this group of average wonderwomen going about their callings. Hooray for whatever group supports you in your work. Hooray for more Peace in the world. 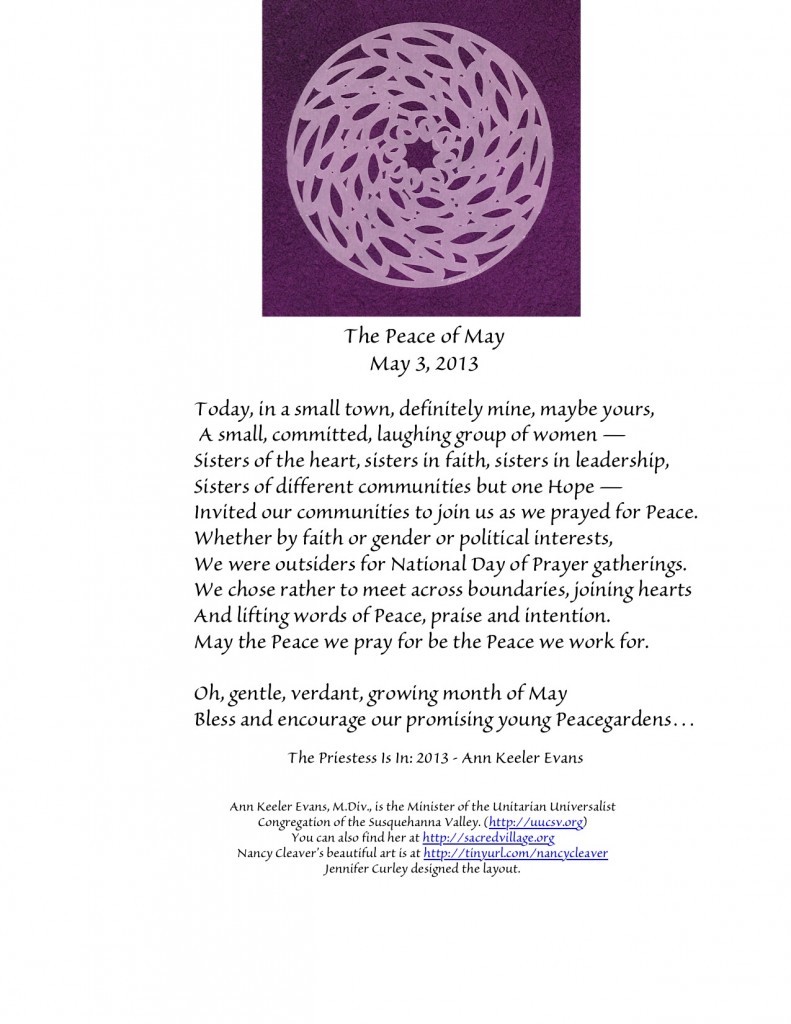