Asch. We are who we are. And life is as we know it. Sometimes that’s amazing. Sometimes it’s less so.

Yesterday was filled with both. Lorraine’s sister and her daughter came to visit. Hooray. We packed down a watermelon and a gooseberry/black current pie/raspberry (oooh, my!) and took the ferry boat from the Picasso sculpture (yes i sorta took a picture, some time I’ll figure out how to put my reeeeeeally mediocre pics on Facebook… oh, thank goodness for Deb Slade and her art shots!) over to the island.

Once we got to the rocks on the other side of the island, it was amazing. You could dive off the rocks into the lake and bob and float and laugh and we did! Apparently there are rules: two dips in the lake and then you can drink your coffee or tea. No drinking tea if your eyelashes aren’t damp!

It was just lovely. You can’t believe the amount of stuff we hauled out there to enjoy ourselves: chairs, towels, sunblock, thermoses, forks plates, knives, cutting boards, serving spoons. All for a trek through the woods. But make no mistake. Once again, it was Paradise!

But the niggling little problem about paradise is that I don’t walk well in the woods, particularly woods that are up and down with stones and roots. And roots covered over with springy, springy moss, which is beautiful and flowering. I’m not sure what triggered it, I had it fairly well controlled going out, but coming back to the boat, I realized I was having a panic attack. It was full blown before it broke my concentration, fast heart, fast shallow breathing, threatening tears. Once I realized, I could ask Lorraine to go more slowly, and to be patient. It wasn’t so much help I needed as time. It’s frustrating, because it’s really beautiful in the woods… intellectually I know that. But if you’ve ever had panic attacks, you know it just takes a lot of concentration and slow exhalations to calm them. And understanding friends. I had all that, but whew. Unreasoning fear, from out of nowhere.

But we got to the boat on time and the ferry was waiting. Wonderful old wooden boat to take us back to the mainland, laughing all the way. But sheesh, wanna know if like having all my insecurities on display, in front of beloved friends (and who better?), no, not so much. Hard work. Great Payoff…

And yet, it was Paradise. There was Peace. There was nothing more beautiful than, not only the rocks, but the journey out and in. I think I’ll try it again. (Poor them! Lucky me!) 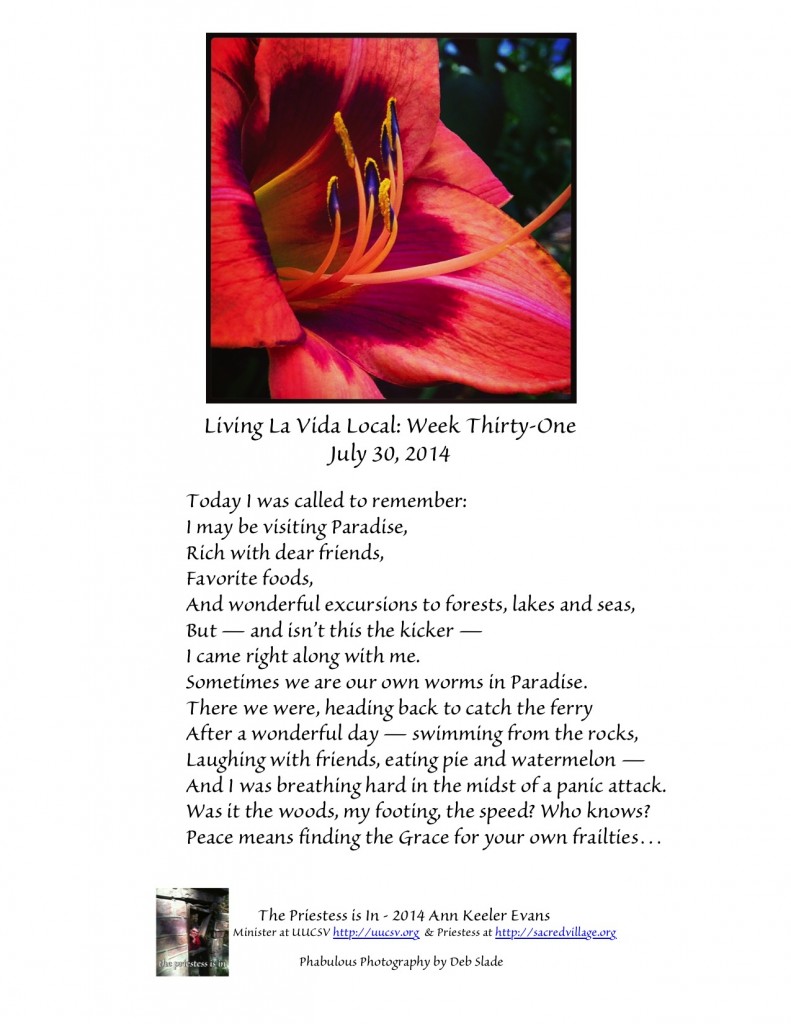