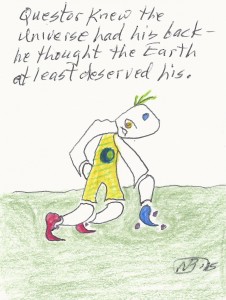 Fear, Questor knew, was a useless exercise in controlling the outcomes of anything – it just plain doesn’t work! But the opposite of fear is not ignoring the problem that has caused you fear! The opposite of fear is compassionate action! It seems a good idea for humans to show compassionate action for the next generation of all beings on this blue and green Earth, by repairing the damage already done. But that’s just his opinion – his, and the opinion of many worlds who made the same error in judgement. Not every exploding star is a star – many, in fact, were planets, alas. Remember that the next time you see a so-called super-nova – it might actually just be a stupid-nova!