Yesterday I was with friends at Monticello. It was a lovely visit made all the more delightful by the fact that a dear friend and gifted poet Chet’la Sebree is doing an internship there. She’s currently writing on Sally Hemmings. Oh, I look forward to what develops. You should as well. She has one poem out, recently published in an anthology. Mine is currently in the car, and I am not, so I’ll add that link later. If you want to know more about her, check out her website here.

Monticello is gorgeous (although it always looked bigger on the nickle!) and filled with the most amazing innovations. He was ingenious and figured out so many things small and large. The house really is a marvel. He was brilliant and his writings and thinkings inspire us today. There is so much more to learn about him. The group I was with was there because he was a friend of Joseph Priestley and they are mounting a play on the relationships between Priestley, Jefferson, and Adams.

He was also, as were many men of his day, a slaveholder. He wrote against it, yet used it on his plantation and took enslaved people with him wherever he traveled. He had a four-decades long relationship with an enslaved woman and had children with her. Those children were released at his death but served during his lifetime. Jefferson died broke, so I suppose he can’t be blamed for not settling money on his children of color. It’s a messy history — a story of his day.

Aside from Chet’la, my purpose at Monticello was to keep learning about slavery. It’s a different story than the one I learned at Whitney Plantation, but it was slavery, nonetheless. It kills the souls of those caught in its maw. I keep reading, I keep learning. Ancient or new, it’s an ugly, ugly story, a scar on the face of humanity. I’m currently reading Not for Sale: The Return of the Global Slave Trade and How We Can Fight It by David Batstone. It is both terrifying and inspiring. I just saw a headline that Texas is the #2 state in human trafficking. Oh, my heart, oh, my heart.

We need to raise our voices. We need to mourn the lost and brutalized; we need to go to work on behalf of the living. It is not to be condoned. It kills our souls as well as those of the enslaved.

Peace is not a fuzzy, far off goal to be tossed around lightly, it must be struggled for. Peace must be waged. 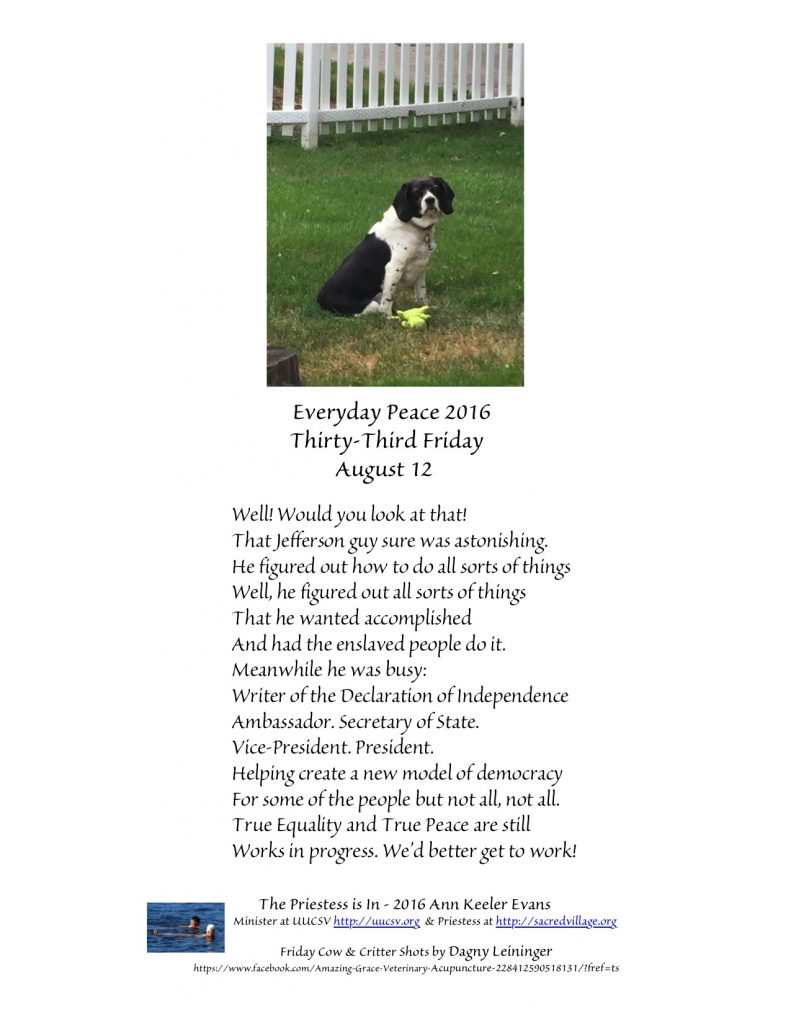