I have a friend named “Mary”. Mary and I have known each other for ten years now; we met as freshmen in college and have seen each other through a lot of things.

In my case, I have mostly seen her through breakups. And new hookups. And breakups again.

Mary is not one to be single for very long, and every time she starts a new relationship it’s with the most fabulous guy she’s ever met. Of course, she’s sure that this time around, she’s finally met The One, at long last. At least, that’s how it is for the first month, and then she starts having random hookups.

It’s never cheating. It’s just exploring. She says she’s getting this wild stuff out of her system before she settles down. Or sometimes, “something” just happens with a friend while they’re hanging out and she said she couldn’t help it. But it’s not cheating, ever, as far as she’s concerned. It makes me feel really bad for the men in her life when she tells me about her latest rando. And somehow, the boyfriends are seemingly oblivious, so I end up feeling even worse, because they’re being played.

Recently, Mary has gotten engaged, again, and she’s asked me to be her maid of honor. Again. As a person, I feel like I can be friends with her because she’s never done anything to me. Still. I do feel kind of like a dirty accomplice, and I’m a little put off at the thought of standing at her side on her wedding day, knowing what I know. She swears that once he’s put a ring on it she’ll be faithful to her future husband, but I don’t really think I believe her. What should I do? Should I tell her fiancé what’s going on? Do I cut and run out on a ten-year friendship? Or do I keep quiet and accept her at her word, that she’ll cut the cheating out when she’s finally a Mrs.?

B&P: Well. Wow. It’s hard to know where to start on this one. But we’re going to start with… Yeahhhhh…we don’t like it either.

I might start with the lying and asking you to lie. Which she does, every time she introduces you to a new BF and then proceeds to cheat on him and tells you and expects you to “wink, wink, nudge, nudge.”

Why would you choose that option? How is she your friend? Granted, your letter’s all about her cheating, but I don’t see one way you’re anything more than an accessory, or maybe a walking dispenser of absolution. Check your resume to see if the title “Mother Confessor” has been slipped in on your job description. Once she involves you, you start lying to the boyfriend. Granted she was your friend first, but if you like them at all, you’re helping her hurt him. And them. You’re lying too. Is that what you want?

B: I can’t help but feel that she’s coming to you to be absolved. Like, if you nod and metaphorically pat her on the head and tell her it’s OK, then it’s…you know. OK. Is that what you want to say? Is that the message you want to send? I agree with Ann, even though you’ve not said a word what you’re doing is lying right alongside Mary. Inaction is an action, people.

P: Now, for the cheating thing. Actually, none of us are perfect. Too many of us have done things of which we’re ashamed, especially when we were younger. We don’t know what we want. We don’t know how to ask for what we want if we do know. And all too often, we don’t know how to be honest about our misdeeds. These are the lessons we spend our 20s learning. You do lots of silly things early in life that you don’t do later in life because you learn they’re not good for us and they’re not good for people we know and love.

Cheating is one of those things. She’s a serial cheater. I don’t know whether it is an addiction. But I do know she’s not going to stop doing it until she admits that she’s a cheater and gets help figuring out what she’s looking for and why she’s destroying other people’s lives. Because that’s what she’s doing. And ding, ding, ding… if “things just happen” can we trust that she made sure that her surprise partner wrapped that rascal, or is she risking passing some dread disease on to her so called beloved? She’s not just risking giving her partner a broken heart in that case.

B: What I hate about “it just happened” is…well, yes, she’s not admitting to her behavior, but more explicitly, she’s not owning her sexual autonomy. You don’t “whoops” into bed with someone, it’s not like she slips on a banana peel and falls naked onto her paramour du jour. Engaging in sexual activity with another person requires a decision-making process, and unless she’s being forced into bed (which is another, far more dire letter) then she is an integral part of that process. She CAN keep her clothes on and prioritize her relationship with her fiancé. She CHOOSES to cheat on him.

B: Yup, I also don’t care about whether or not she’s promiscuous, in that there are all sorts of sexual agreements that couples make that work for them, and they can certainly include other people in their beds. But the key word here is that it’s an agreement, mutually reached by both partners. Everyone has to be on board for an open relationship to work. Her fiancé is anything but. Mary can tell you all of her details, all she wants, and it doesn’t change the fact that she’s not telling the one person she should.

P: We probably haven’t seemed really supportive yet, have we?

I think you need to decide what you think friendship is and what you want it to be. And then you get to be that friend. Being her friend may mean not being in relationship with her — because she’s not a good friend. I don’t want to hear the “she’s a good person.” She’s hurting people. Again and again and again. As the Wedding Priestess, I made my couples state their intentions to love one another for the rest of their lives and then I made their community sign up to love and support the couple and their intentions. I once did a series of three couples’ weddings. By the time Couple Number Three was getting married, Couple Number One was getting unmarried. Couples Two and Three came to me and said, “we went to talk to Couple Number One and asked them what they were doing. We reminded them what they had promised. We pointed out that it made mockery of the promises we had made to them and the promises we were all making to one another.” I was so proud of them. It took great courage. Nothing changed, but they were good friends. And the husband leaned on their love as the wife went on to the new life she’d already created.

B: I think you need to spend some time deciding who you are. You wrote a letter asking us what steps you should take in managing your relationship with Mary, who exhibits behavior you no longer think is justifiable or can condone. And—I can’t believe how often I have to remind people about this—the only behavior you can ultimately control is your own. So who do you want to be? How do you want your behavior to be perceived? It helps tell your story, and in your letter, in your own words, you say this situation makes you feel like a “dirty accomplice”, you’re “put off” by the idea of being in her wedding, and you “don’t really think you believe” she can be faithful after her wedding day.

Side note: “don’t really think you believe” is a wishy-washy way of calling her a liar. Can we please just say the words?

P: And she wants you to be her Maid of Honor? Um… whose Honor? How can you have honor if you’re not being truthful with the bride or the groom? Marriage isn’t just about a great wedding. Marriage actually matters. What if she does this once she starts having babies? And let’s be clear, why would we think she wouldn’t keep cheating? Because, trust me, babies add stress to a marriage. And what does she do when there’s stress? Mess around. That’ll be great for the kids. Wanna be the aunt who tells the five-year-old that Mommy found someone better to do? Want to testify at that custody trial? Who better than you?

B: Should you tell her fiancé about her activities? No, I don’t think so. He’s in an unenviable position but it’s not your job to manage their relationship. Or, essentially, tattle on her. But good friends find the courage to have difficult conversations when they’re necessary. Good friends make room to care about the legitimate well-being of a friend. They don’t take the option to look the other way when they know their friend is making serious, potentially dangerous, mistakes. Can this lead to a friend-breakup? Maybe. Mary hasn’t been a good friend to you, as Ann has pointed out already, but you’re not being a good friend to her by holding your nose when her behavior stinks. And you’re not beholden to the acceptance of behavior that at one point you were kind of OK with, but now don’t think is quite so cute or funny. People grow, and change. It’s what we do. She might not like hearing what you have to say, but really…too bad. So again, I ask you: who do you want to be? The dirty accomplice? Or the good friend? It’s up to you. 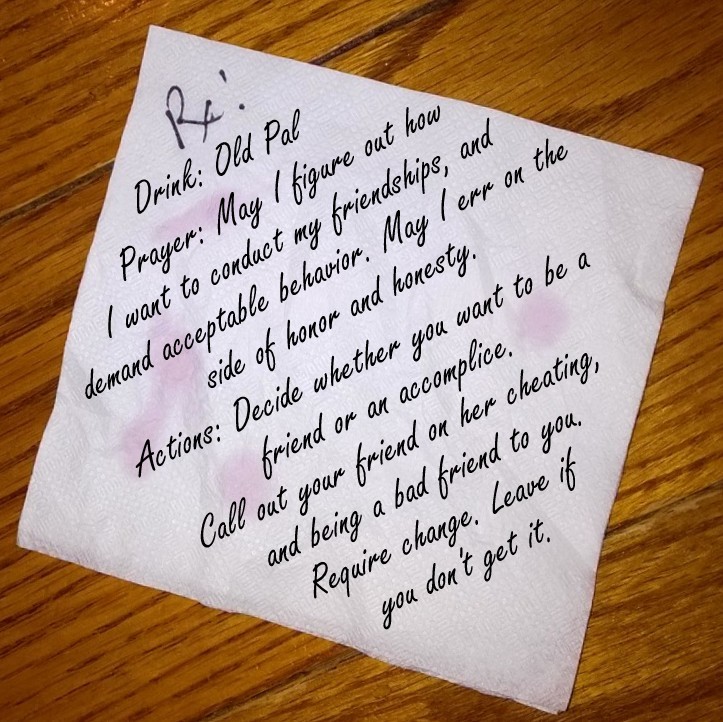