It always seems so romantic when you say Gold Rush. You never think about how crazed and desperate people must have been to sell everything on the off chance that you might strike it rich in a world alien and distant from yours. There were about 75 million Americans at that time. About 1 in every 750 people picked up stakes and left for Alaska.

When you get there and realize what they went through to get there… each miner had to bring a ton of equipment with them and haul it up the mountain passes. Not a ton as in a lot, but a ton as in a ton. Everyone was cheating them, horses, particularly the ones they were sold, were not equipped to make this trek and they had no idea what enduring this kind of weather meant. There wasn’t enough to eat. People got sick. People went insane, People died. They have no idea how many.

Once again, in the mindless pursuit of one group’s better life, it was deemed acceptable to force the nomadic, indigenous population onto a reservation where many died from the new diseases introduced by miners. My history books didn’t mention that and neither did the tours. Even the Wikipedia site only has a one line mention of the Hän people.

We took a bus ride that climbed from Skagway through the White Pass and the train trip back down. It was beautiful on a beautiful summer’s day. We looked at all the geological wonders, but talked only sporadically about the hunt for gold and all it cost the miners and the Native people of Alaska.

The promise of easy riches… it’s never what it seems. And it always costs far more than we imagine for far more people. Most people never recouped their $1,200 investment (In today’s dollars, that would be $33,456). Shopkeepers and Swindlers got rich.

Maybe it’s time to consider what the real prizes are in this world and work for something that lasts; what kind of world do we want to envision and dream of? Let us consider balance. Let us work for Peace. 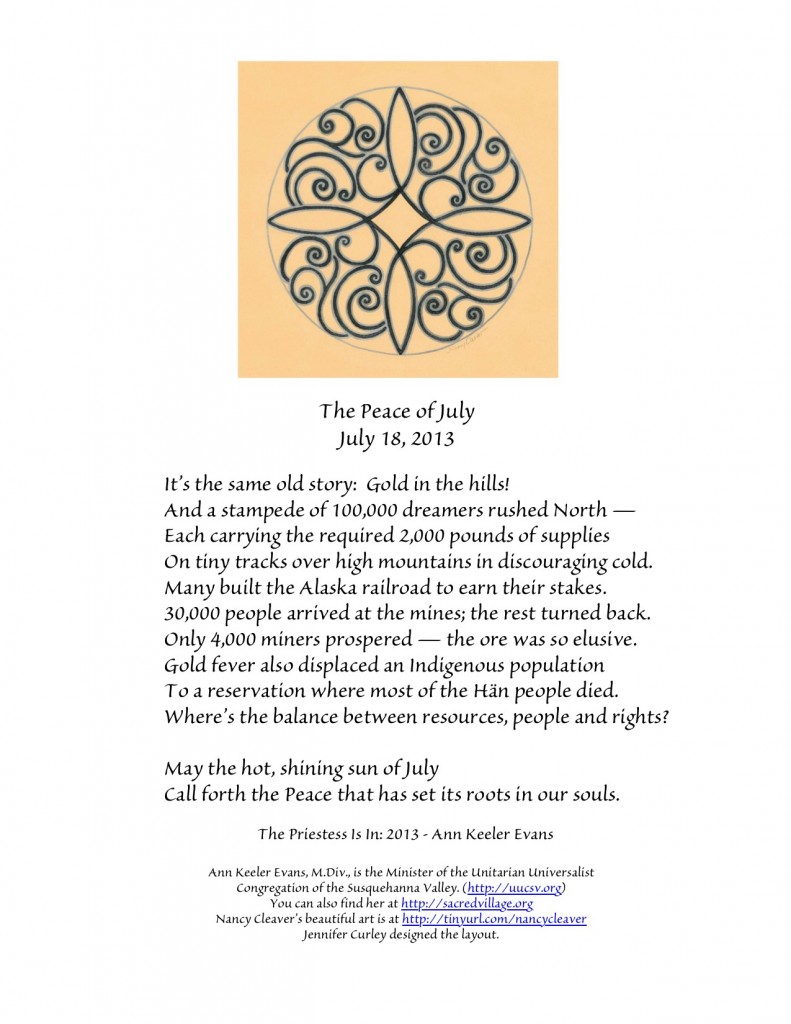