Yesterday I climbed a lighthouse. It was one of those metal circular staircases.

Although I didn’t run all the way to the top, I made it. I was so glad I’d made the effort when I got there. And then I remembered. I have to go back down. Aside from the fact that I’m out of shape, steps frighten me.

Some of that is structural. Apparently I carry more weight on one side of my body than the other, I have a small scoliosis. I have anxiety; such steps are white-knucklers for me.

I so wanted to look out. And it’s a glorious view of two rivers and the intercoastal meeting the Atlantic. Our guides were filled with information about the First Nation Peoples who had lived there from incredibly ancient times until today. They didn’t spare the ugliness of that history either. The lives white settlers carved out were not glamorous; while it was beautiful yesterday, it gets scorching hot and water required some ingenuity to keep constantly available. And the lighthouse itself was a marvel. It was built before the War Between the States, by George Meade, who became the commander at Gettysburg. The South hid the works for 5 years and then it was re-established. They started carrying huge vats of melted lard up the steps to fuel the lighthouse…  it’s now solar. (really? huge vats of melted lard? eek.) Several times a night the lighthouse-keeper would make that trek up the steps to fill the reservoir.

But I walked up. I looked around. And then hand in hand with my fear, my friend in front of me, I walked down. It’s not the first time I’ve faced this fear. If I want to do some things, it won’t be the last. It’s not a one and done fear. Every step i take I feel as if I will catapult into space. I know I won’t and keep telling myself. But wherever it is in my body that fear lives “knows” I will fall. So one step at a time; an ongoing requirement of being present to what is real. Fear. Peace. Fear. Peace. 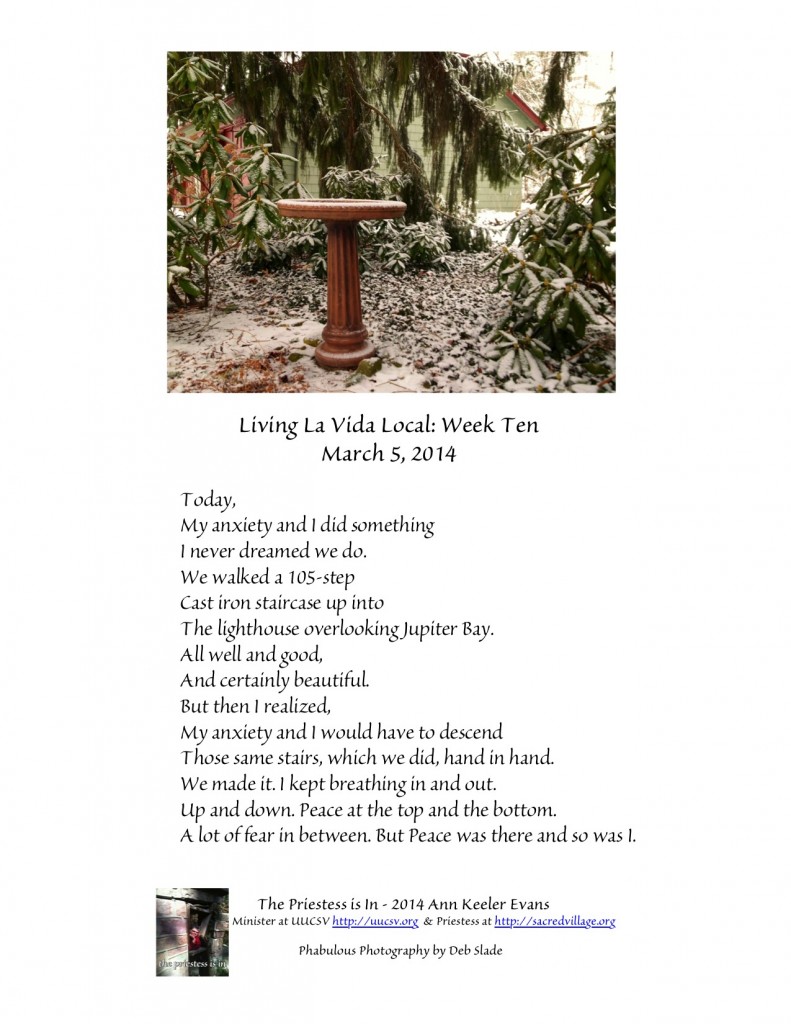