Dear Bartender and Priestess: When I was in medical school I fell in love with one of my classmates, a great guy, I’ll call him “Bob”. We’ve been together for four years, but for the better part of a year it’s been long distance; my residency is in our home town, but he is doing his residency in another state. We see each other every month and are completely solid as a couple, deeply in love.

Two years ago, Bob and I visited my father and stepmother. Bob likes to discuss politics and history and can hold his own in a discussion; my father has decided Bob has anger(Control) issues. Dad told me Bob isn’t affectionate enough with me because he and I didn’t have PDAs at Dad’s house. The fact is, I asked him not to mug me up too much in front of my dad. Then my stepmother said, “just so I was aware”, that my entire family hates Bob. I found out later this was a total lie, though not until after I (tearfully) confronted my mother and sister about this.

Dad refuses to give Bob a second chance. He won’t invite Bob back to the house no matter how much I try to reason with him. My mother says Dad secretly hopes our current long-distance status will dribe Bob and I apart. But that’s not going to happen. We got engaged in April. Since we’re bogged down with student loans and still finishing our schooling, we don’t have a ring yet or anything like an anticipated wedding date. The only people who know are his family and our closest friends.

I am terrified to break this news to my father and stepmother. My father is no stranger to cutting people out of his life if he feels it suits him. He didn’t speak to his own mother for five years. When I was 13, my father left my mother, abandoning the family to marry my stepmother. Since then I’ve bent over backward to be the perfect daughter. The tension that I feel about how he treats Bob completely stresses me out, but I don’t want my relationship with Dad to crumble. What can I do?

The Bartender and the Priestess Respond:

B: Ai yi yi.  What an emotional quagmire. PULL UP A STOOL, THIS IS GOING TO TAKE A WHILE. Why did you bury a critical piece of information—that your dad left you—in the bottom of your letter, almost like it’s an aside? Oh, by the way, he abandoned us. Why is the relationship with your father so important? He’s the one who left you in the past, you didn’t leave him. And the fact that you’re bending over backward to be “the perfect daughter”—which is something that doesn’t exist—props the door open for him to leave you again. You’re an adult. Don’t be terrified that this mean, selfish person is possibly going to leave. Ask yourself why you want him in your life in the first place.

P: Let’s be clear, now he’s threatening to leave you again and he’s making the conditions for his love completely impossible. He’s working to cut you off from love so that he can tell you whether or not you’re lovable — as opposed to accepting the good opinion of the man who loves you. That’s scary. And it raises the odor of abuse. And what’s up with the family dynamic? You introduced your beloved to your dad and step-mom, and she then got in touch  — or said she did — with the rest of the family? Let’s take a wild flyer here. Your dad was having an affair with this woman when he left your Mother? Right? And you believed what she told you rather than knowing that she’d be trying to ruffle the waters.

And it doesn’t seem like you trust your Mom a lot — that would be your Mom who stood by you when your father waltzed — so that when she says, honey I never said that, why wouldn’t you accept that? What’s with the big fights? Is that common? It seems there’s miscommunication everywhere. I’m not sure why your your mom is being a conduit for your dad either. he said/she said is a lousy way to communicate.

B: Seriously. You believed your stepmom over your own mother? I’m curious as to why. Has she been a source of comfort in your life, or something divisive? Because in my admittedly limited experience, she’s pretty divisive. You seem to have learned to turn your back on things on a regular basis, my dear. You’ve abandoned responsibility for your own well-being in favor of an abusive relationship. You void positive interactions with her mother—who, we assume, at the very least didn’t abandon you too—after your father left. Do you think your mother’s worth is diminished because your father left her, too? Or does her feeding and clothing you in the time after he left generate any sort of present-day loyalty?

P: So how do you want to live your life? Do you want to be a happy, well-adjusted adult? Being a whole person, and present, as a doctor. Do you want a healthy relationship with your partner?  Stifling him isn’t going to bring that about.

B: Or do you want to live your emotional life as an abandoned 14-year-old girl who’s chasing her father’s affection? Because a pretty significant part of you is still rooted in that girl who got left behind.

B: Because really, if you’ve found The One, the person you think will make you happiest above all others, then you should be only too happy to shout it from the rooftops. There’s no nobility in staying in a relationship that makes you suffer. There’s only suffering. You need to figure out how to allow yourself to go out in search of joy.

P: If you’re worried about honoring your father, you have to honor the man he is rather than the man you’d like him to be. He’s never been particularly fatherly, is borderline abusive, and unlikely to change. On the other hand, Bob seems like a keeper, a man willing to work toward a life utterly unlike the one your father offers. I say what I always say… choose Love 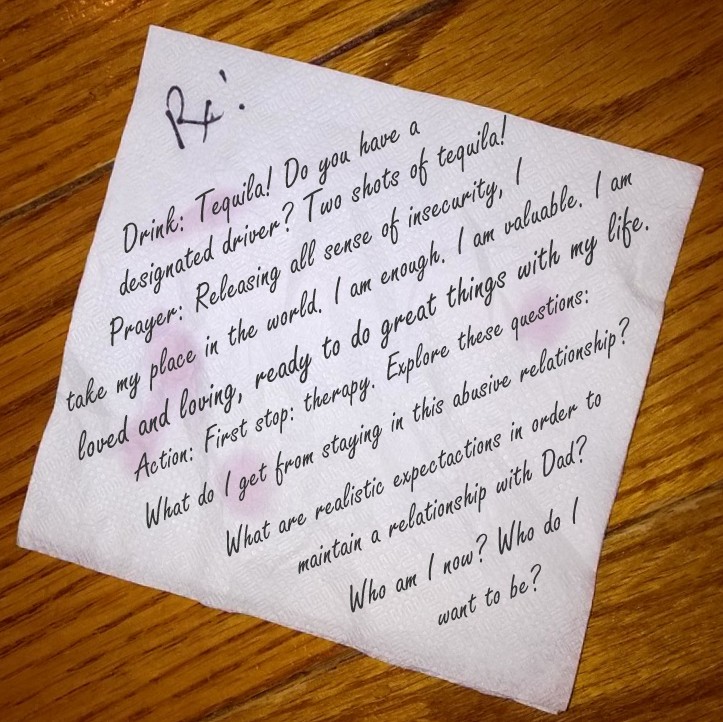 Have a burning question you need an answer to? Write us at bartenderpriestess@gmail.com — Smart Women: Here to Help!

Phabulous Photography by Deb Slade. Many thanks to the Lewisburg Hotel and, of course, thanks to our glorious Model Marjorie.