The Question: Recently, I decided to host an afternoon open house for my whole family; siblings, spouses, nieces, nephews. Open the door at noon, say final goodbyes by 4, eat something from the buffet table. No one was leaving my house hungry, I can promise you that. This is something I almost never do, maybe once every four or five years. We don’t see each other often, not as a large group, anyway. There are issues among us, and one of them is alcohol.

It plagues my family, deep.

Three of my six siblings have had a long-time struggle with alcohol addiction; one of them died from it just two years ago (she was only 59) and the other two are in recovery, after a pair of DUIs each. Alcohol addiction has passed down generationally in my family, too; several of my nieces and nephews now face the same struggle, though their problems have not crossed legal boundaries. Yet. In light of all of this, I opted not to serve alcohol at my brunch. I never said the attendees couldn’t bring their own (and one nephew brought beer for himself), but I wasn’t going to provide any, and I asked my husband of 22 years, who has watched all of this happen in my family, to not drink that day, either. And this caused a fight between me and my husband. 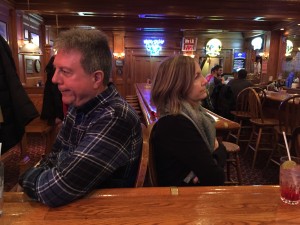 My husband thought it was “unfair” to deny cocktails to the other guests at the open house. He likes to enjoy a glass of wine, particularly when my family is around. He thought it was unreasonable of me to level demands on the rest of the attendees because only two of them couldn’t drink. And he feels that since my brothers—the ones in recovery—will have to learn how to be around alcohol, I was coddling them with my decision. What do you think? Was I being unfair to my other guests with my decision?

The Bartender and the Priestess Respond:

Priestess: Wow! Barkeep? I’ll have two aspirin along with the club soda! ! There’s a lot going on here, and none of it easy. Let’s start with the simple: Hospitality. Here’s what Google has to say about that: “the friendly and generous reception and entertainment of guests, visitors, or strangers.” This is not to be confused with the hospitality industry, which means supplying what people want for a price. So, no, providing a warm welcome and good food at your house is a lovely bit of hospitality. You don’t owe anyone alcohol. I disagree with the original notion that you’re denying anyone anything by inviting them to your house for a party, even if alcohol is not served. So that’s the easiest part of the question dealt with. And staying simple, doesn’t anyone know how to use google to figure out some great drinks that are non-alcoholic? You’re not the only people in this boat, you know. Terri, how are you calling this…

Bartender: I feel like I should be all, “Step aside, people. I’m a professional, let me handle this.” But this is a situation that’s painfully fraught. Annie, my dear, I can’t do this without you.

First, let me make this ABUNDANTLY clear: if a person—any person—wants to host an event and not serve alcohol, that’s perfectly fine. Much like they can choose not to serve shrimp salad, or quiche. It’s just a thing, it doesn’t define an event. At least, it shouldn’t. I know that as far as parties and hosting go, it’s generally what’s socially expected. It’s also expected that people control themselves around it, which the letter writer’s family has proven they cannot do. But even without the tragic family history, it’s OK to not serve alcohol.

And clearly, the letter writer did not “deny” people their right to drink. She didn’t take away the six pack her nephew brought. She just chose not to provide it. Her house, her family, her right. I am completely in support of her decision to host her own family at her house as she sees most fit.

Priestess: The question of whether you and your husband can have a party without alcohol seems to be in play. Is the husband willing to talk about his need to lubricate the party? Especially, if it’s a party that happens very infrequently. And what you needed, it seems to me is support in a very hard circumstance. As a person who spends a lot of time doing ritual and celebration with people, if there’s anything that interferes with people’s ability to be present it’s alcohol. It sounds like you not only needed to control the event (the ever so infrequent event), so that people weren’t tempted, so that they behaved well, you also needed to be backed up here. You have a brother who died from alcohol related issues. That’s huge. And even if you’re skittish and a bit rigid about it (and I’m not saying you are)? So what? You’re his wife, who needed him.

Bartender: Did we answer what the letter writer thought was the actual question? Because what I really want to talk about is this husband. I’m kind of worried about him. I think he might have alcohol issues of his own.

I keep circling back around to the words “unfair” and “deny”. Unfair and deny. Alcohol. It’s unfair to deny me booze. When someone reaches that point at the bar, that’s when I cut them off. “It’s not fair because I want it” tells me that person has crossed the line from reasonable adult control to childish, id-based petulance. It’s taken on emotional precedence in the user’s mind. I feel like hubs is putting way too much emotional weight on the presence of booze. And, conversely, he’s not putting enough emotional weight on the struggles his wife and her family face. How many of her relatives have to die young before he accepts that, for them, alcohol isn’t all fun and games? There’s an unsettling lack of compassion here, for her, from him. Wasn’t he there when she buried her one sibling? Didn’t he see that affect her? Doesn’t the husband get that her decision actually has nothing to do with him and everything to do with his wife’s pain?

Priestess: What I don’t see in your husband’s conversation is the “honey, how is this for you? How can I help?” If this is a normal part of your pattern, then you may want to look at changing it? But since you’re both commenting on things it sounds like you work fairly easily together. Does he know how you feel beneath all the rational stuff about your family’s drinking problems? Do you know how you feel? What kind of counseling have you done about this? It’s hard as hell if you’re the sober one in a family full of people who are consumed by alcohol. And sober or no, alcohol affects everyone in the family.

Bartender: Of course, if the wife’s brothers are now in recovery, that’s where they will be for the rest of their lives and it can’t be expected that they’ll be sheltered from booze forever. They’re going to have to learn how to function around that, and in this one respect the husband is correct. However. Two years isn’t that long of a time in terms of getting past the untimely death of a loved one — from the very thing you want to serve at your party.

And, family holds a special place for people. I don’t mean that in terms of familial love. I mean, they’re really good at setting off emotional triggers. How many times have any of us been at a booze-soaked family event and thought, “You know…this is why I drink.” How many times have TV shows or movies used the sight-gag where a person is at a family event and swallows an entire glass of scotch in order to deal? A lot of the coping behavior we exercise in adulthood, we start learning in childhood, thanks to the interactions with our families. I don’t think it’s a bad thing for the letter writer to not endorse the sort of behavior that’s been demonstrably harmful to her family. Again: she is not Carrie Nation, breaking kegs of beer in the street so nobody can have any. She’s just not providing the thing that she feels is an emotional and physical detriment.

I mean, if one sibling had died of lung cancer and the other two were in chemo, would the husband insist everyone smoke inside because he wants it that way? Or would you be putting out large bowls of cigarettes and inviting people to take a few?

Priestess: You don’t ever say how the party went… Was it a good time? And if it was a good time, does that give you both some leeway to have more of the same? And before you do that are you willing to do just the wee-ist bit of work to figure out where you stand in this family of self destructive people — with a husband who is no where near as supportive as you need in these very painful moments. And if he’s unable to be supportive because of his own alcohol issues, don’t you want to know that the issue isn’t the party, but, once again, alcohol. And if that’s the case what do you need to do?

And to answer the question, can a party be a party without booze?? Betcha by golly, yeah. 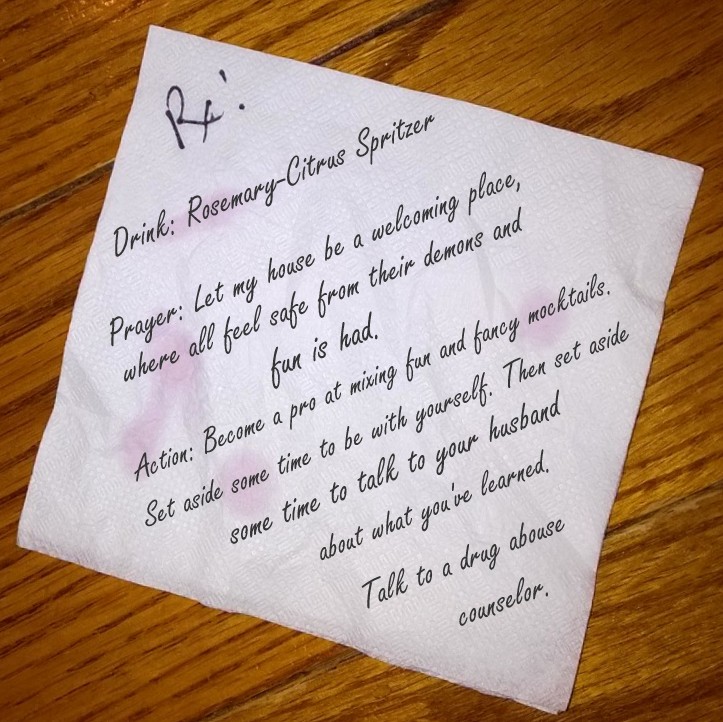 The Bartender and the Priestess — Smart Women: Here to Help

2 thoughts on “What’s a Party without Booze?”