The notion of trust has been on my mind for so many reasons recently, many of them sweet. Deb’s last words to me were “Oh, Annie I trust you with everything.” I’ll take that. I’ll cherish that. That’s the sweetest Love in the hardest places.

But trust has limits… it breaks… we falter. Sometimes that enrages me — as when governmental bodies or large corporations spend a lot more resources sniffing out trust breakers than they save. But they love the notion that they’re “catching” the bad guys,” never mind when it’s at the expense of “the good guys.” Once you’re focused on the bad guys, there’s nothing left but waiting till the good guys show their true bad colors.

Purely anecdotal, but the only time I cheated in school is when elaborate procedures were put in place to keep me from cheating. on a typing test. Proud that I cheated? Nah, not so much. But still shaking my head over the stupidity? yep. And for a woman who spent and still spends a lot of time coloring within the lines, it was a daring slash of color. Even if it was on a course I paid for… and I actually, now that I remembered, pretty much half the time cheated for other people. Wow, talk about an old memory. Funny. It certainly made me untrustworthy in that course…

I watched a person with a debilitating illness be cross examined yesterday in an effort to catch her out. Someone who should have been able to understand the disease left with the words: I hope you feel better soon. There was a lot of effort put in to catching out someone they’ve been in relationship with for a long time. yep, that’s aggravating. (and don’t even get me started on the lack of accessible restrooms in the place where they bring people with neurological difficulties to be tested. really?????

I think trust is something we must work to have, even when people are untrustworthy. Otherwise we live in a closed and frightening world… because of a few who are out there to spoil our world. I believe that trust strengthens as we exercise it. I think perhaps it needs to be cherished and celebrated simply because it is elusive. We fail at things. If the penalties for failing are too high, we don’t get back on the horse. We shut down. We begin to believe we’re miserable people and act accordingly. And we certainly don’t apologize. (notice my nice justification for cheating above? As on bluster and self-excusing, Es on trustworthiness and apologies.)

But if we notice that trust like life is impermanent, can we see it as precious? If we understand that Peace is living into Peace not being at perfect Peace and there will be missteps and mistakes, can we be better at all of them — Peace, Life, Trust?

It’s worth exploring, don’t you think? Because is there anything I could have rather heard Deb say as she let me give her medicine and try and make her comfortable as she was dying? I can’t imagine what. The Love was all through those words, and spoken so many times… but the trust… oh, how sweet. I’ll live a lifetime on that. I’ll live a lifetime trying to live up to that. 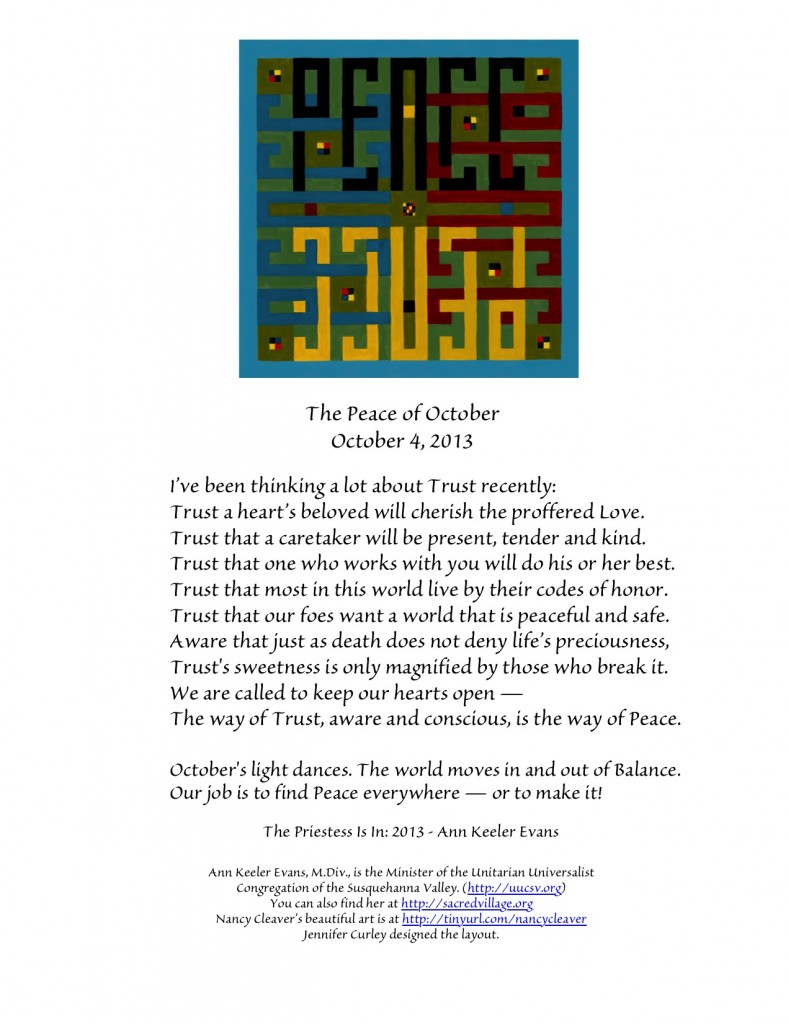