Is your music an offering? Is it a spiritual practice? Do you offer it the discipline it requires to get better? It deserves it, you know.

Does it soothe you or wake you up? Does it celebrate life or do you keep it only as an accompaniment?

Peace of the music be with you. May you transform the music; may it transform you. 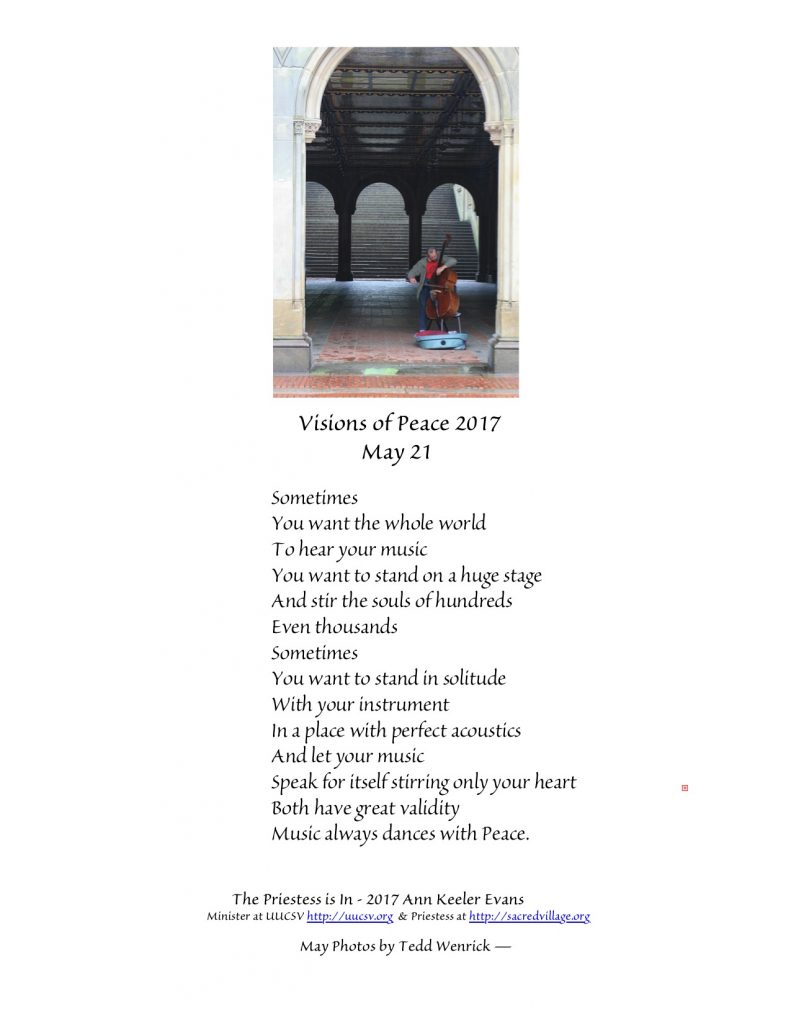 Whatever our talents, they are to be appreciated, developed, and employed.

As children, we have been taught to both denigrate our own talents, “oh, really, but I’m lousy at that,” and to inflate them “i’m the best at that,” particularly when we’ve not applied any discipline to what may or may not be a skill.

Skills, talents, and gifts are too often ill-utilized, either because we’ve not done the work to develop them or because we hesitate to employ them, simply dismissing their value.

Time to take a good look in the mirror and tot up those gifts. If there were ever a time the world needs our gifts to be used for Peace and the well-being of everyone and the Earth we live on… it is now. We will live in Peace only by making it.

We will make Peace with our gifts. 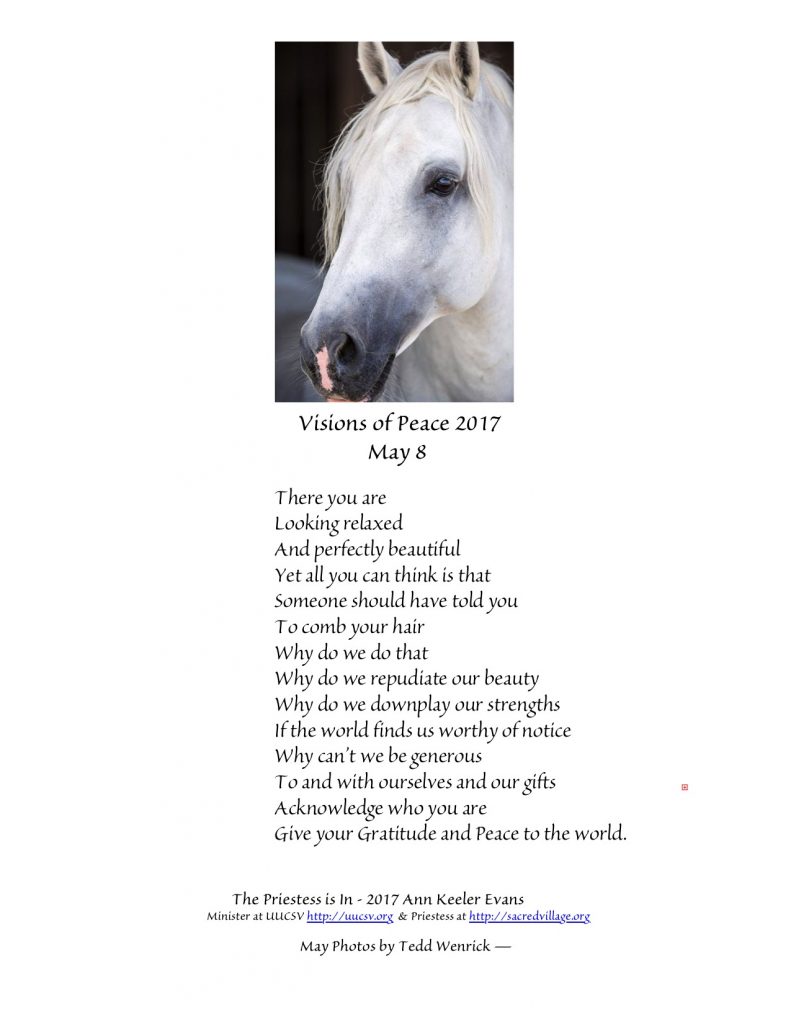 It’s so hotly contested, but prayer may never be used to exclude people, it may only include people.

When you are in a group that prays in a certain way… a community of faith then prayer is a signature of that group.

But when the group is a public group, particularly a state run group such as a school, official prayer doesn’t belong.That’s the law of this country and I believe, as a minister, a good one. People pray differently or not at all. This is not a Christian nation. This is not who we were founded to be. If you’re proud to be American, be proud of what the country was founded to be.

But there are other reasons that I think prayer isn’t sportspersonlike. Nothing to stop someone from a quick prayer before sinking a penalty shot, although, as a theologian I would argue you would have done better to practice and the Divine shouldn’t be responsible for compensating for your lackadaisical approach to discipline.

But if the bonding is happening only with a few, even with most, and you’re leaving people out of the circle, then they are outside the circle not just at the beginning but also for the game. If they’re pretending, to fit in, then you’re still excluding them and reinforcing the fact that they are not really part of the group. This isn’t going to lead to good results for individuals or for the team.

This is all in reference to an article that talks about a school system that has been notified it must quit “official” prayer and come into accordance with the law. It says it’s a successful team. Does that mean it wouldn’t be successful if they don’t pray? Is there a reason they’ve got a coach? Because it is her/his job to teach a team the skills and reinforce the discipline to play the game well together.

A winning team will have a variety of players to enhance the program. A team that is inclusive, rather than exclusive, can have extraordinary results if you make space for new approaches.

People bring their religious selves with them wherever they are. What’s important is that they live what they believe rather than just talk about it.

I know, I’m an old Peacemaker. I believe that it’s the role of prayer to bring people together… and demanding that the Divine lead your team to victory over another… doesn’t fit that bill.

Prayer is not the only way to help people bond. Be your best self, find other ways to bond with people who are different from you.

Give Peace a chance. And follow the rules of the country. 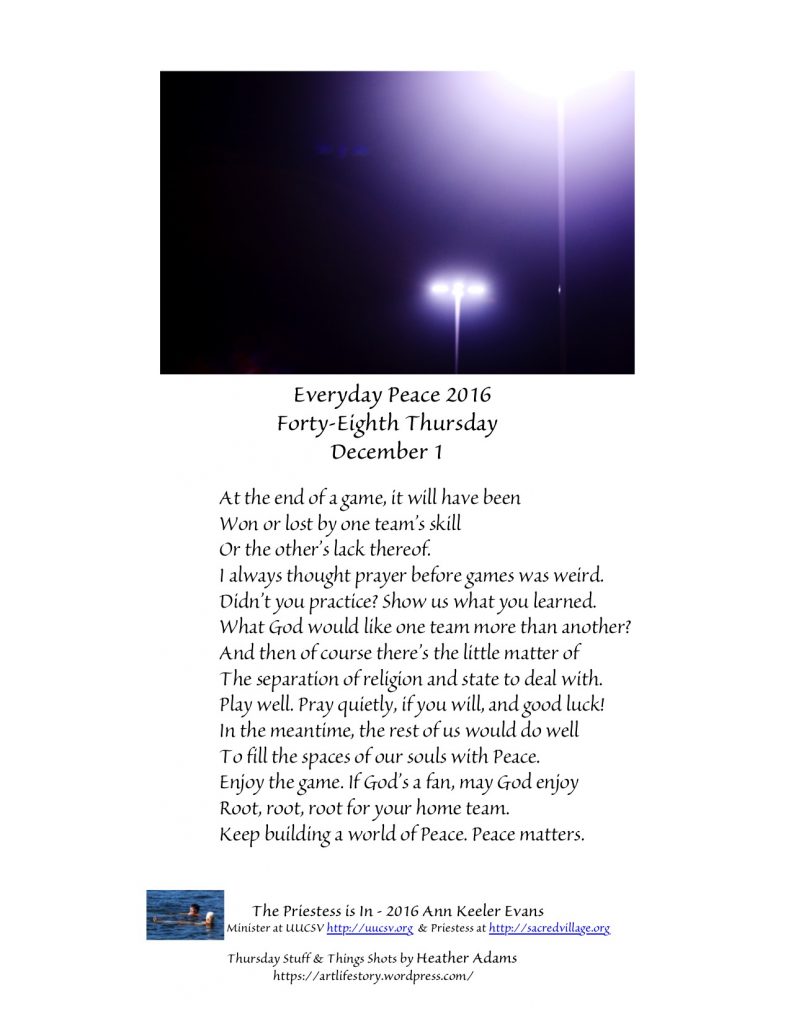 When asked how his music is different now, after all years of playing; he said he could now add to his notes all the color of emotion and expression.

What lovely insight. You do your work, you practice the scales and the pieces. You put discipline into your craft and gradually or maybe suddenly you realize that you and the music (or insert your art here) are playmates, free to explore and to be explored. Free to enjoy. Free to be enjoyed.

She talked more about the instrument and the way she’s gradually made this flute her flute. A new flute, different, bolder, more capable than any tool she’s ever played. She gets to bring her color to this new tool as well as to the music… and the music pours from her gift.

Their joy in playing was palpable. We can have that joy in our lives if we just do the work. And while that’s not a simple thing, it is an every day thing.

What joy these two brought their audience of friends who have listened for years. What joy they will bring those who listen for the first time. What joy they have in what they do. At this changing point in their career as musicians, what bigger Peace could they ask than to keep on doing what they love. What sweeter Peace can they offer? It’s a new Moon in their lives as well as for us. May it be filled with beauty. 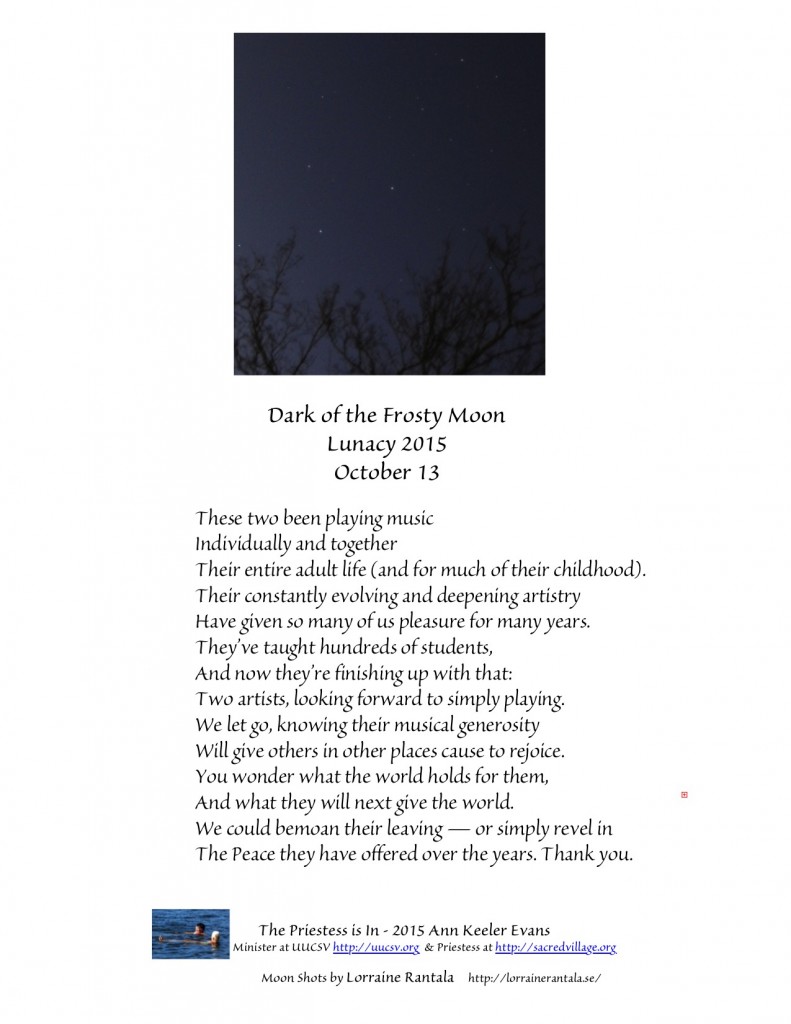 Whether I’m writing or plotting a campaign, I find the way is never straightforward. Much of the time it takes to accomplish something is not the actual writing (or doing), it’s what’s needed to allow things to assemble themselves.

Really — aren’t brains remarkable? To think of little thought molecules flying apart and then reassembling while we wait (and — sometimes — wait and wait). Then there’s the need for that oh-so-important red pencil, because, really, just because one paragraph flows from the next doesn’t mean that you don’t have a detour on your hands.

And it doesn’t seem to matter how much attention I’ve put into things beforehand. I can travel around with a project on my heart for a week or so, and still find that nothing is straightforward… Ideas and projects seem to have minds of their own! And part of the realization is that the way is never straight, there’s no one direct line between here and there.

Maybe the process is simply one of making Peace with the slow and meandering nature of project-making, of allowing myself to be informed by the information I gather and the need that’s trying to express itself. I’m certainly grateful for the opportunity… but it does take time, which sometimes makes me grumpy.

And discipline… I never thought I’d be great at the discipline part, but I guess I simply didn’t have anything I cared about enough to hone a craft. But even daily and weekly repetition of the craft doesn’t eliminate or even dwindle the amount of time a project needs to become what you want it to be and what it wants to be. I find the words teach me. I may think I have a clear idea where a story’s going and then it picks up and moves. Then I have a lot of work to do to discern whether I’m getting closer or farther away from the heart of the matter.

The vision of a spiral does help, to consider on working downward and inward on ever tighter circles, coming constantly closer to the heart of the work is an image that sustains — but really… sometimes I long for work that I can just get out of the way. I guess I should take up ironing! I’m not sure how ironing will contribute to world Peace, however…

So I guess I’ll walk the Peace spiral, do the hard work, and be grateful. Not everyone has the possibility, the privilege, of waking up and doing what you love. I do. And I give thanks. Peace be with you on the crooked, meandering spiral of life. 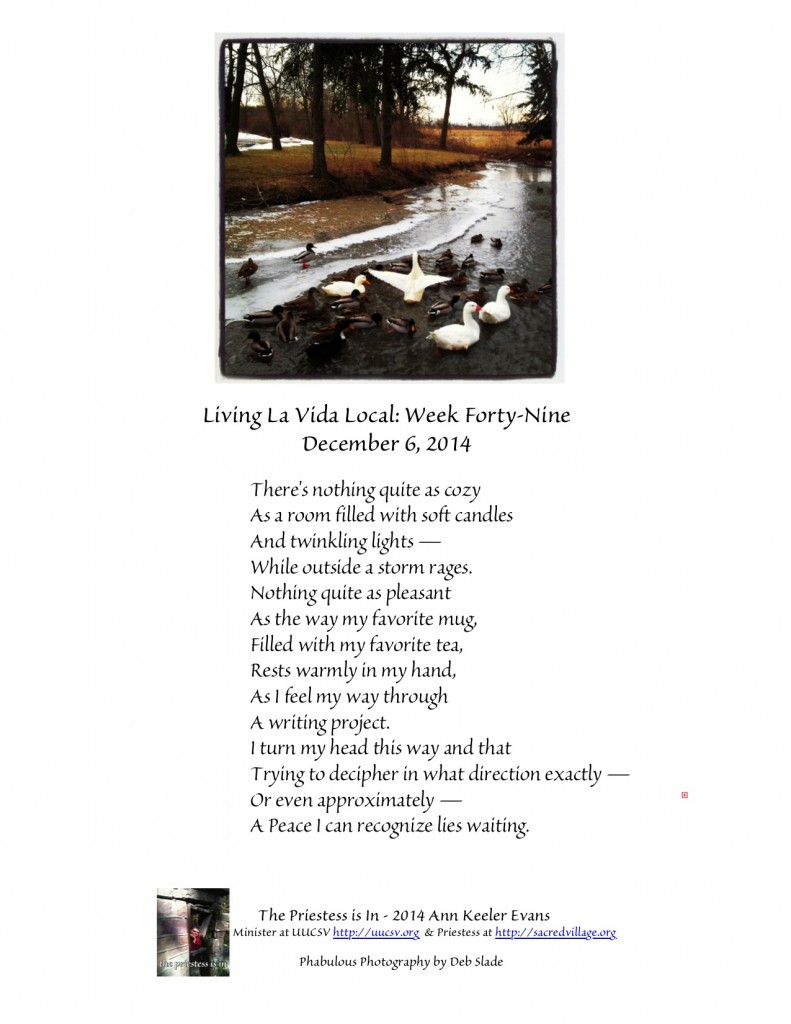