It is good that there is a day in our lives when we say thank you. It’d be grand if we did this more frequently. And as so many of us say, there’s family, there are friends, there’s food (and some would add there’s football) what’s not to like about this holiday? I’m really looking forward to time with my nephew and his wife, visits to friends and a whole weekend that continues the celebration. Big bonus: I get to spend much of the weekend with my husband, which is not what we always get. I’m a happy and a lucky woman. While there are faces I miss at the table, I have family and friends I love and who love me in return. I have a job I have waited and prepared a lifetime to do, and I have you and a place to say what I think and feel and believe. Huge thanksgiving. Joy that races between quiet and explosive!

However, some people don’t have those luxuries. Even if they have food, they may not have family. Some are missing both comfort and sustenance. Somehow this day feels like another reminder of their loneliness. When we can, we should help here.

This year, I think it’s incumbent upon us to remember that the gratitude that is tied up in so many of our minds with a thankfulness for this country must be balanced by the realization how many people are excluded from the American Dream. And more than excluded, threatened. There’s been a lot of writing lately about how this current uproar in Ferguson is less about Blacks’ demanding visibility than it is about white outrage (again with the outrage) that society is changing and, in fact, there must be, even will be, parity. Black lives do matter. And so our gratitude must be tempered with awareness. And our gratitude must be the fuel for making a difference.

Our hearts must be both sorrowful and grateful. We’re plenty complex enough to hold that tension. Today let us feast. Tomorrow let us eat leftovers and consider how we might help. Celebration and action, longtime friends of Peace. 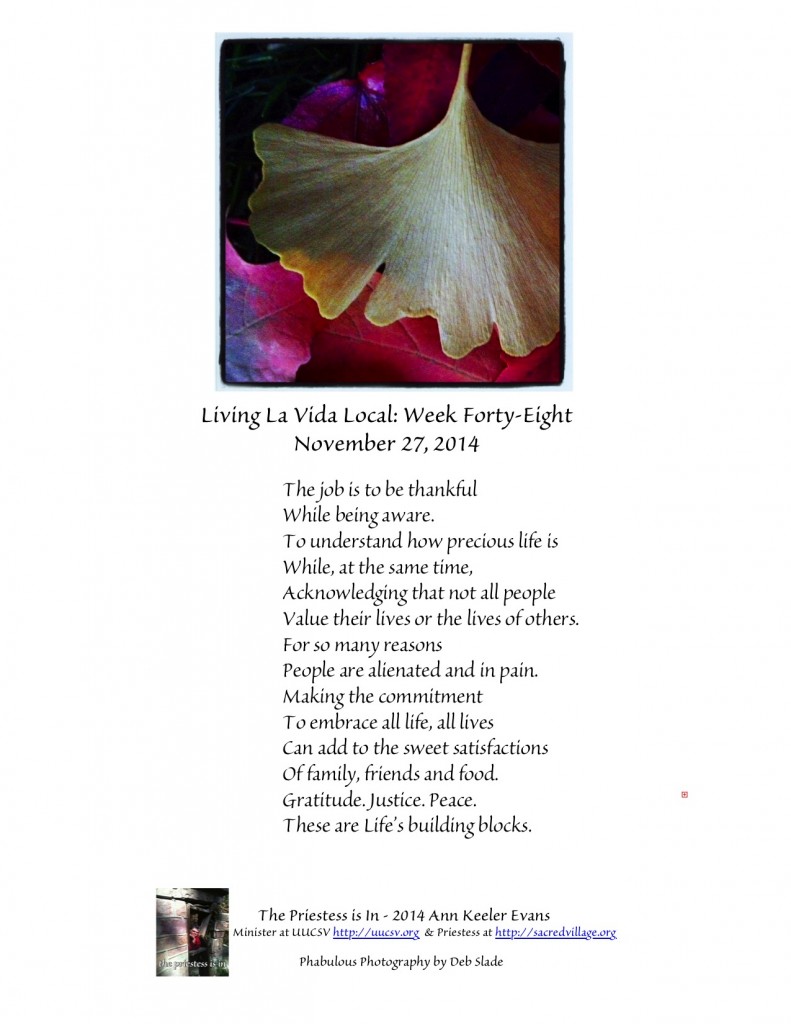 Oh, it was a challenging evening. I went to see the film The Honor Diaries, which takes a relentless look at the notion of “honor” in tribal societies and the ways women (women’s bodies) pay the price for a family’s honor.  It looked at honor violence, women being beaten, raped, disfigured; honor killings; and Female Genital Mutilation. I was in a hall filled with young women at a local college (and why weren’t young men required to be there?).

At the end of the film, which was attended by one of the women who was in the film’s roundtable, there was a Q&A. Part of the discussion about the film beforehand had been whether it was Islamaphobic. The speaker, a Muslim, is very clear, as are most of the women in the film, that they are working on civil rights, not (yet) on Reformation of Islam.

What is true is that many of the people there had to struggle with the notion that this was other… other than us. The violence in these countries is extreme and horrific. But it is supported by our lack of connection to people we understand to be completely different from us.

All that day, I’d been struggling with evidence of diminishing rights here in the states. Lack of access to birth control and abortion, rising rapes, death threats to young women taking what some men perceive as ‘their’ power. Comparable violence? No. but on the continuum? yes. And I believe the lack of focus on these problems is rooted in the same dismissal of women’s value. In those countries women are seen as having half the worth of a man. Here, at least financially, we’re pretty clear that we’re 78%. But any diminution of human value allows such atrocities to continue.

Women need to see this connection and be outraged. So do our Brothers, Fathers, Husbands, Friends.

So what does Peace need? The awareness that there is no Peace (and that we’re part of the problem). Justice. And a flat out commitment to bringing Peace through addressing (stopping!) the injustices.

It’s all very complicated. and so what? 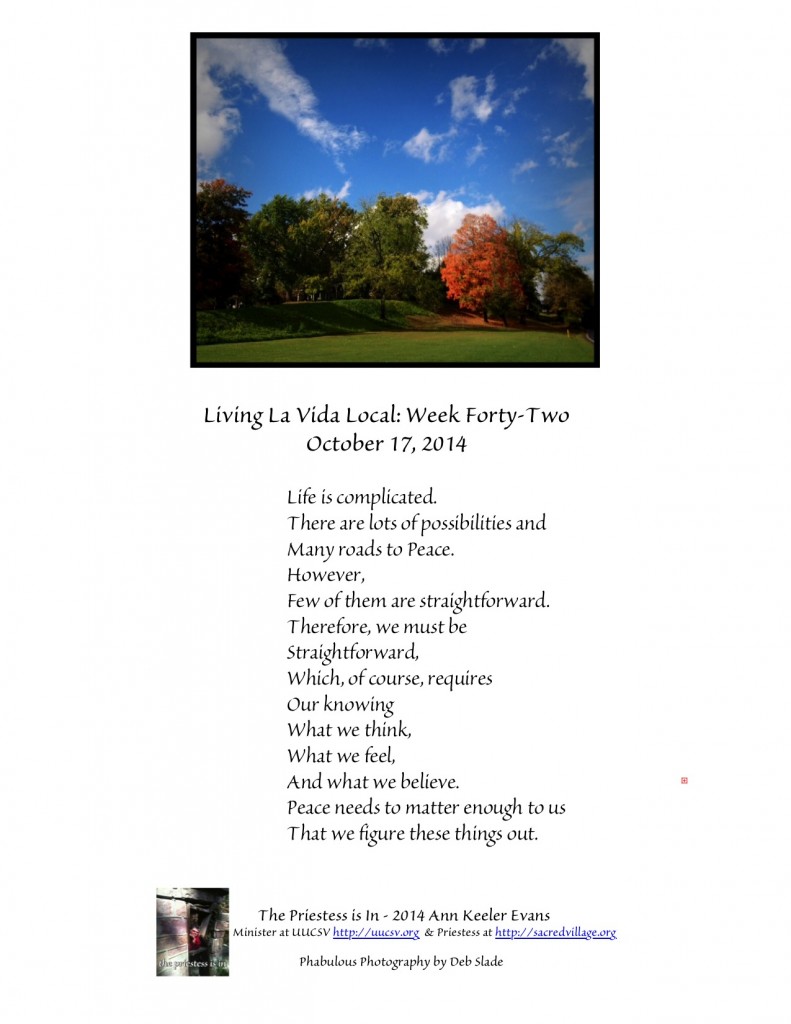