Yesterday was exhausting. There were too many articles about women’s being targeted for being good at what they do… and the responses’ ranging from lower pay to death-threats. In one article there was a nonchalant… oh two women had to move out of their house because they were being targeted for — talking about gaming. Seems it matters enough that one woman, who was supposed to speak at an event in Utah, cancelled when the University wouldn’t install metal detectors for her event even though someone had written a letter threatening to kill her and all the other feminists. I’d say “hunted down like dogs” but we don’t talk about our beloved pups that way. Women, meh. And those weren’t the only posts about women’s lives being endangered.

And then there were the articles about the children. One is dead, one has killed. They’re trying a 10-year-old boy as an adult — which is much better than getting him mental health services earlier in his life, eh… and finding out what provokes that kind of action in a child. Certainly, I know there are psychopaths with badly wired brains. But often, there are kids in trouble. Who knows what he is… But he didn’t get what he needed. No, I’m not excusing him. But I’m not excusing us either.

So, you read, you think. You try not to live in the rage. I know its value, but I know its cost as well.

I had meant to have my musing written before I went off to the theater last night. I just got involved doing other things… so that didn’t happen. Looking to balance myself a bit, I reminded myself about the artists I live among. There are so many who just open their hearts and minds to us… It’s quite magical. Songs, poetry, books, and plays. I’ve got to believe, if you look around, people like that are everywhere, people with their hearts leaking out, spilling out. Magic in the air, Change on the ground.

And then last night, one man, on the stage talking about climate change, but also talking about a moral imperative to act and his willingness to trust that we would stand with him; that people would do the right thing.

I’d just been talking to Dr. Jojo about this… a very smart woman had just written a sermon about people’s needing to act from their love and willingness… their needing to feel it… But I have to tell you, if I didn’t feel the imperative, whether I define that as the Goddess with her hand firmly shoving me out the door, or a simple understanding of what is wrong and a willingness to work for that not to be true… I think we have to get up off our collective asses. We have to vote in the voting booth and on the streets.

Peterson Toscano believed last evening and offered that, slyly, pointedly, inspirationally, laugh out loudly. We are so lucky. “Apocaloptimist!” oh, yes, Peacemaker, Hope Giver… let’s get up offa those things! The world waits for our strong hearts and gentle hands. 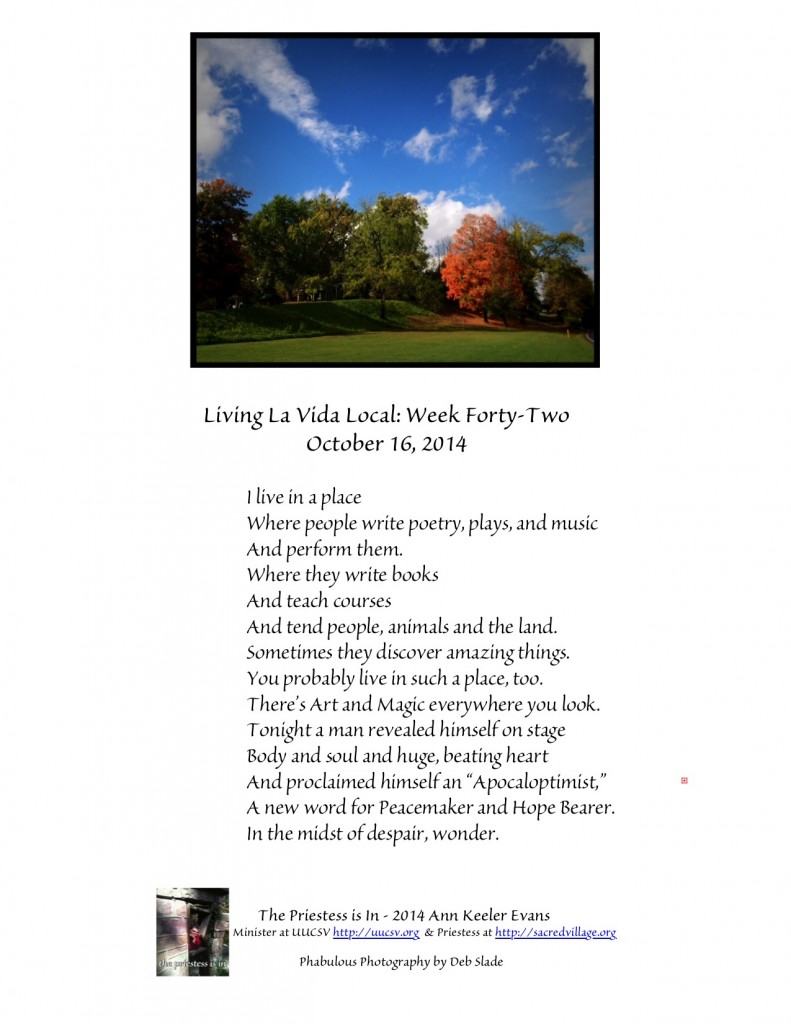