I’ve been living, as the poem below says, in Mercedes Lackey’s Valedmar, filled with Mages and Companions. It’s been lovely. I was tired and depleted, and it’s been a grand vacation. When you can’t lie on a beach, go to the library!

I don’t read sci-fi in general, rather I read a very small segment of the genre, women’s fantasy, often sword and sorcery fantasy. (and THAT’s about the most I’ve ever admitted in public!) I read it for three reasons, first because it completely interrupts the real world. It helps me stop thinking. When you live in this brain, stopping thinking is an occasional blessed relief — maybe even a rite of holy obligation! Second, I like the that the heros and heroines are always striving for a better world. In my world, I find inertia and stagnation often drags me down, tempts me to ignore my calling to do the same, seduces me to work around my values and beliefs. Heroines on paper? Nevah! Third? I’m beginning to think that authors’ use of magic is really about their longing for to create Peace, which is, I believe, the biggest magic we have available to us in this world.

In this series, I was really struck by the the author’s description of the aftermath of the working of great magic, the disruption it causes in the world. She was envisioning storms arising from a working of great evil, in increasingly larger ripples. But isn’t that how things are? One little action, and sooner or later, ripples begin to spread. With evil-doing, the ripples are two-fold: greater acts of violence and increased indifference them. But isn’t it the same with acts of Peace. One person acts and another is encouraged. One person acts, exposing the ugly root and another sees and acts for the good.  We have choices about the ripples we want to put into the world. Indifference or action? Violence or Peace? Willful Blindness or Vision and open hearts?

It’s January, almost February. Here we are, gathering the shards together to begin building our own Dream for Peace, however great or small. Those dreams as we implement them will cause ripples. When people see us act for good, they are empowered to do the same. 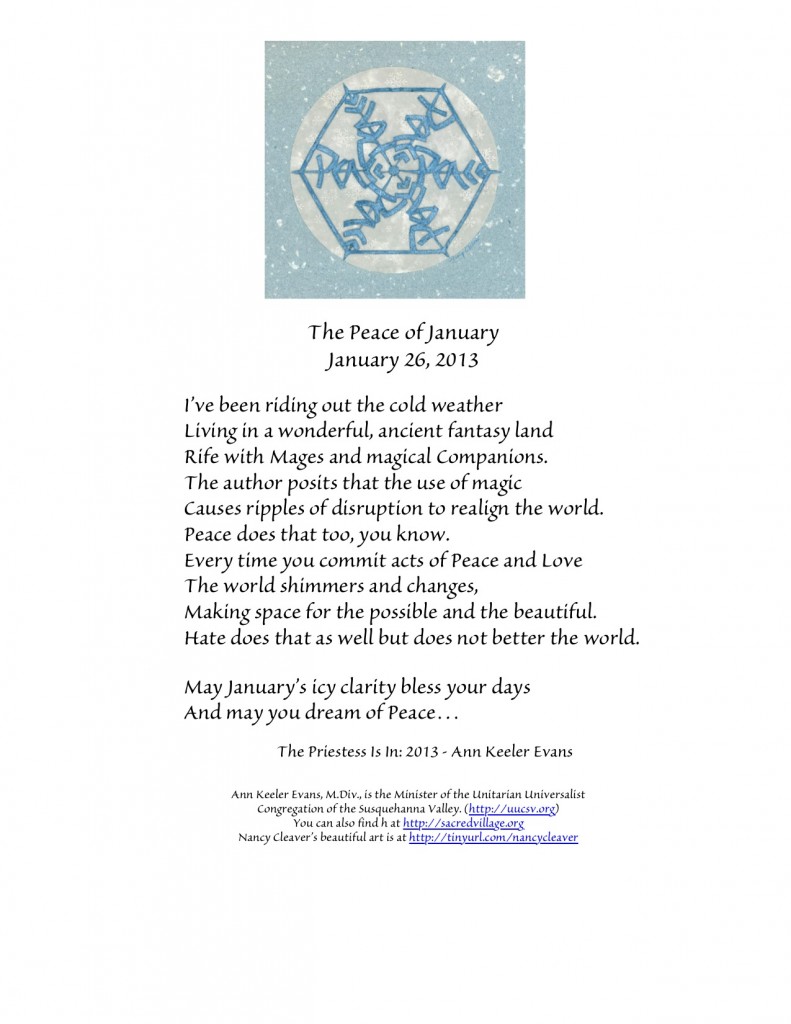