I am a second semester freshman, thinking about majoring in political science. I love trying to understand how our policies actually work. I’ve been doing projects with local campaigns and for our town commissioners since 9th grade. I’ve found that even the people whose views weren’t mine were usually good people, looking to do a great job. In fact, the woman who was my best mentor was one with whom I share very few political views, but she loves the process and the privilege of the work and was really encouraging.

I turned 18 in December and have been very excited that the first time I get to vote is in a presidential election. I’ve been working on a campaign on campus and feeling really great that there was room for a freshman.

Except it all feels like it’s gone so wrong. These are the primaries. It should be exciting that different people are supporting different candidates. Of course I don’t like all the candidates. But that doesn’t mean that everyone who thinks differently than I do is a person who is too stupid to live. Someone from the same party as mine came over and terrorized me because I am campaigning for a different candidate. He called me the worst names.

I managed to hold on to my cool but I was really hurt and could feel a whole mouthful of childishness rising up my throat.

What happened to the notion of worthy adversaries and civil discussion? I thought I’d be most upset about the fact that people don’t think it’s worth voting. Instead I’m overwhelmed by the hostility.

How do you engage in constructive ways? And how do I keep from feeling beaten up for being different than some people want me to be?

P: You are so right to be concerned, the Bartender and I are firmly in your camp. Being a priestess and all that, I usually try, at least publically, to refrain from vulgarities. There’s this one cartoon, though, that really sums it up for me. I’m sorry I couldn’t find it to give the artist credit. Hive mind? There was a guru sitting on a hill. And people trudging up the hill. There was a kiosk bearing the sign something like: Meaning of Life —don’t have time to wait. There was a person reading a pamphlet that said simply “Don’t be an Asshole.” It is stunning to me how many people use the electoral process to discover their inner asshole. Surprisingly — to them, at least — this does not make things go either smoothly or their way. And they become bullies.

This nonsense is bullying, pure and simple. What becomes a problem is how do you stay engaged in what you love — and how do you not get beaten up? And the fact is, the only way to stay engaged with the process is by disengaging with the bullies. You have to find a way to do what my friend Michael’s mother always suggested: Rise above. There is no sense working on a beautiful swan dive if you’re headed into quicksand — and conversations with people who aren’t interested in you, or facts or common courtesy are pretty much nothing but quicksand.

B: While modern-day politics may not be quite as dire as the sentiment expressed in A Game of Thrones—when you play the game of thrones, you either win, or you die—it can often feel that way. There is a tremendous amount of personal investment that goes into politics. Particularly when you’re young, enthusiastic, and establishing yourself and your beliefs as you take on the mantle of adulthood. We choose a political affiliation because it resonates with us on some level. We believe in their fiscal approach, or their take on social justice/international policy/environmental issues/health care, and so on, and so on. There are a million different policies that can attract a person to a party, and then further on to admire one particular politician over another. All of which should provide fertile ground for lively debate, particularly if you and your politico-colleagues are informed and passionate about your favored issues.

But we seem to have lost the ability to disagree. There’s a pervasive Game of Thrones mentality that rejects legitimate conversation in favor of trying to crush your opponent under your heel. Again, it’s an easy trap to fall into when you’re young, before you’ve learned the ins and outs of tact and diplomacy. Kudos for you to figuring this out long before many people in politics ever do.

P: You may need to develop some stock response that gives them no openings and repeat until they walk away or you can get them to stop biting your ankle. Words like: “It’s so interesting that people can look at the same issues in so many ways, don’t you think. And it makes me excited that people are so involved in this election. Oh, is that the time? Class at 11. Gotta run.” And then go! Don’t wait for rebuttal.

You cannot engage someone who is not interested in fact, nuance, or reality. It just doesn’t work. Being polite doesn’t mean letting people beat you up.

B: And learn how not to get baited into an argument. You can exercise your right to not engage in something. When you were accosted for supporting the wrong candidate in your political party? You don’t have to try and convince the accost-er of your rightness. If someone’s that hostile toward you and your political choices then you’re usually at an intellectual impasse. If that’s the likely case, remember, you have the power to say things like, “I’ll be happy to talk to you about this when you’re less aggressive,” or go short and sweet and say, “I’m not having this conversation with you right now.” It’s not that there isn’t room in the political spectrum for spirited debate and mindful conversation. There’s just not room for it with that guy, at that moment. If someone were to walk up to you, knuckles up, out of nowhere, looking for a fight, would you tear your shirt off and dive into the fracas? Or would you think, this is nuts, and walk away? It’s the same thing. Learn to read a situation. Take a (mental) lap around the room before you commit to a debate.

P: I was so excited by the first part of your message. Not only are you interested in government, you’re getting great experience. And you’re allowing yourself to be mentored by people on both sides of the aisle. These are the people who matter. These are people who are doing the work and acknowledging your worth. Stay close to them. Learn what you can. Find more great examples of caring candidates. Watch them. There is nothing more exciting to me to see someone who is both idealistic and realistic about the democratic process. Go be part of it. Make the world better. It’s one way, for sure.

At an earlier point in my life I might have said some of the behavior you’re experiencing is based on people’s age and experience. But I am on Facebook, and I can’t tell you that I see loads of posts from my older, (cough cough!) wiser friends, filled with thoughtful maturity. I was so happy to see the (alas false) story about the knitting gorilla. Who cares if it’s false, here’s to knitting gorillas.

But there is something about that heady first taste of voting and freedom of opinion. You seem to recognize that it’s a responsibility as well as a privilege! Great adulting! Sadly, too many of your cohort does not. Again, don’t let them get you down.

B: I think Ann is right in that you’ve found some great people to get you started on the right foot. You need to remember the internal lesson you learned from your mentor. You and she differed politically, but were able to work well together. Why? Because you were invested in the process, and not in your ego. I mean, God, yes, it feels great to be able to express your opinions and—literally, when you’re voting—stand up and be counted. Who doesn’t like feeling like they matter? You and your mentor could still find common ground from either side of the aisle because you both understand that a political disagreement doesn’t mean you’re totally rejecting one another as people. It’s not your soul that’s attached to a political party, it’s your opinion, and those can change with time and circumstance. Don’t forget that.

P: And lastly, I am so sorry, but dealing with assholes is part of the skill set you’re going to have to develop to be an effective politician. So, yes, their behavior is intimidating, but you’ve got bigger things in view, so don’t let them intimidate you. Find your feet (we believe in you, and I’ll bet others do to) and stand your ground. And when at all possible, walk around the human quagmires. Otherwise make your landing a belly flop and breaststroke the heck away from there. Because you have something you believe in. Hold fast to that. Put a pebble in your pocket and name it that cause and grab onto it when people are being ignorant and hateful. But keep going. Because we believe in you. I’ll bet a lot of people do!

B: I just want to say, even if you’re not going into politics but plan on being an adult, you’ll still have to deal with assholes. Sad, and true. So. Learn to read a situation as it unfolds in front of you before you find yourself at their mercy, no matter into what arena you decide to throw your hat. Good luck! 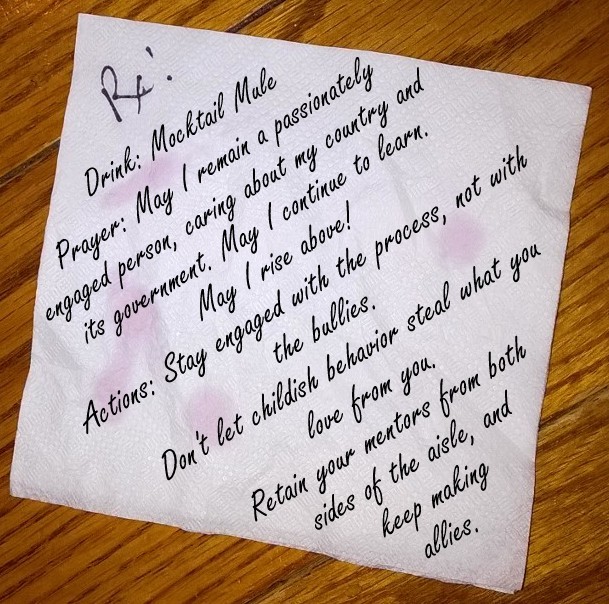