My parents grew up during the Depression and at a time when refrigeration was an ice box. So ice cream was a very special treat for them. My father’s dad would sometimes bring it home from work, late, after the children had gone to bed, and they’d wake the kids and enjoy. (My father sometimes couldn’t remember it happened and they had to show him the bowl count in the kitchen!). My parents courted over an ice cream at the drug store.

There was always ice cream in our freezer. I ate it, but it wasn’t ever a big thing for me. It’s still not a huge deal. I’ll eat it… but I’m not like some friends i know… It became important in my life when I moved back to Pennsylvania.

The day my mother received her dementia diagnosis, she called and said they had ice cream two times and no dinner. (My dad must have starved!). Later when things were hard, ice cream was often the salvation. We’d go out, get a dish of cream and life would seem so normal. Throughout their final years, ice cream often rescued us.

I just wrote to my friend Sue who, disagreeing with me about whether ice cream was a solitary or a shared experience,  wrote “The full benefits of ice cream are enjoyed alone, not even a book or fireflies.  Ice cream is a time to get in touch with the body’s joyous response to one of the most fabulous concoctions invented.  There should be no distractions.”

For me, the eating of ice cream is a communal rite.

But let’s get clear: creamy goodness is pleasure.

And with the savoring, comes an interesting, and sometimes not inconsequential Peace. My friends are here from Sweden. We’ve gone out for ice cream twice. I wanted to show them the meadow where I watch the fireflies. Never mind that it’s mid-September. The lightning bugs showed up. One time, so did the full moon. Here’s my land in a moment of magic and there we were snared in the beauty and the sweet delight! 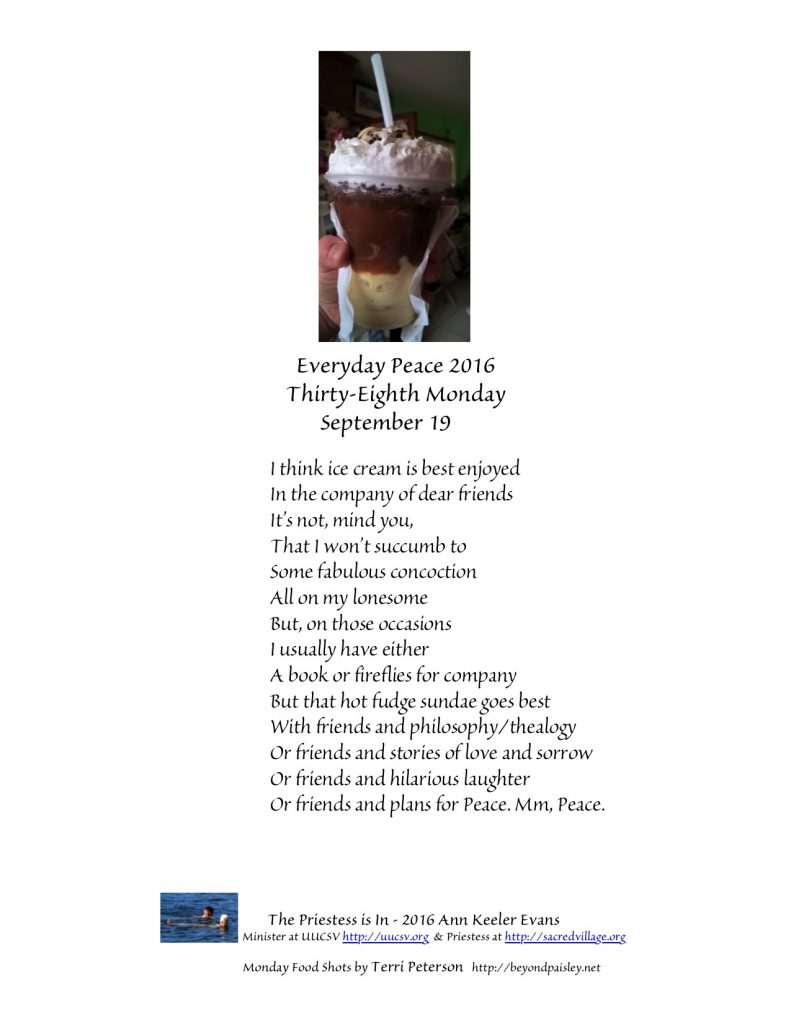