Sweden’s changed my point of view on a lot of things. I was 17 when I first went there. That makes you impressionable. But I was older when they blew up my preconceptions about cemeteries.

I’ve always been interested in cemeteries — especially ancient ones. Maybe because death was so much more present in people’s lives, headstones told sad or triumphant tales of who someone had been in their own right and in the eyes of people who loved them. Sad stories of parents’ losing child after child or lovers enjoying long marriage. In Europe, headstones often detail a person’s job, so you’re able to see that Karin, seamstress was married 47 years, lost 4 children in one year to influenza and had 5 who survived their parents.

Maybe because life is short cemeteries were used to tell stories. Maybe because death was present, it happened in the house often and was commemorated there that when people moved into the church yard, people continued to visit.

I was an early convert to the cremate and scatter movement. But now, I wonder occasionally. There’s actually information that suggests that green burial is thought to be the best for the earth and that cremation is not as pollution free as we might have thought.

Now that so many of my family members are deceased, is it simply hubris that occasionally longs for a place to visit, a place to walk by in my daily life, a place where their lives are represented. In the end, we will all pass from life and even memory. Does it matter that we are not gathered in death? Especially since we never lived in the same place in life?

Is it simply a pretty conceit that folk would walk by the town cemetery and pause and look at our family’s lives and deaths played out in stone. Would they take comfort in knowing that we were now good neighbors, as I do as I walk through the cemetery a handful of blocks from my house?

Actually, I think our family will be scattered on my brother’s land in a bunch of blueberry bushes. It’s not a bad spot for a family who took joy in fresh fruit! Does it really matter if no one knows we’re there? Probably not. And yet.

Ah, another stray thought. But I’ll tell you this. I like cemeteries. And sometimes I wonder. In the meantime, I work at being a good neighbor. You never know how you might end up taking an ongoing role in your community. 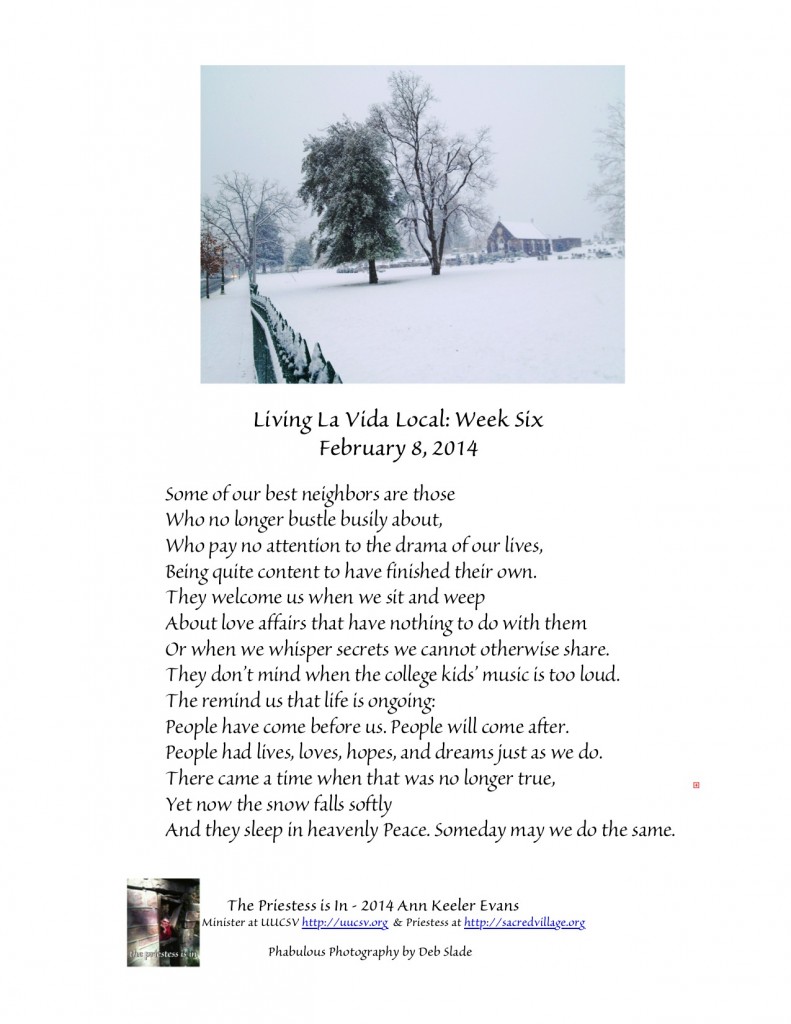