Yesterday, as you know, I waxed eloquent about your sweet support on social media about my friend’s kid. It was lovely for me, and his mom felt held as well. I’m sure that will support the entire family as they figure out how to move forward. Because of course there was more to the story… But love and safety? So important.

So there I am, swimming in a haze of well-being, and we hugged the family good-bye in Båstad and got on the train North. It was a little late, but oh, well.

But, an hour in, we found out there was an accident on the track and we’d have to get off and take a bus. As you can imagine it took a little bit to get the buses together to get a train full of people seated. It was Sunday, the last day of the national vacation. And eventually, the buses came and everyone got sorted out.

But the sorting out process reminded me why we struggle with conflicts. This was so little. There would be buses for everyone. We were all inconvenienced. By the time this happened, we had already missed our train. And that’s what is, we miss the train.

But it wasn’t just the posturing. it was the chaos and the shouting. All I could think was people in Palestine are having their houses bombed. (apparently the Israelis will tell you, we’re bombing your house in 10 minutes. Get out.) People ran over small children and old people to find their place on the bus. Hello, this is Sweden, there will be plenty of buses, it will just take time. It wasn’t really scary, but you paid attention. And there was lots of eye-rolling over the more blatant shows of spleen.

But, it was a bus and train connections. And there was such ill-will. How can we hope to solve real problems if, at the first personal inconvenience, we turn into a mob… (and yes, the train station would have done well to have some personnel there, but still.) Did I step up and organize people into lines? no. Actually considered it, but my swedish is not all that fluent…

We all got on the buses. We had to spend the night in G-burg in a lovely hotel with lovely, lovely, lovely mangled (big iron) sheets and a great breakfast buffet. We went out for dinner and had a beer. And talked. Because that’s what Lorraine and I do. I was grateful to not be alone… but it was just one more lovely day on my amazing summer adventure!

All we are saying… is please, could you please, give Peace a chance? and relax. My aunt used to say: What would you do if you had real problems? One only has to look to the evening news to figure that out. 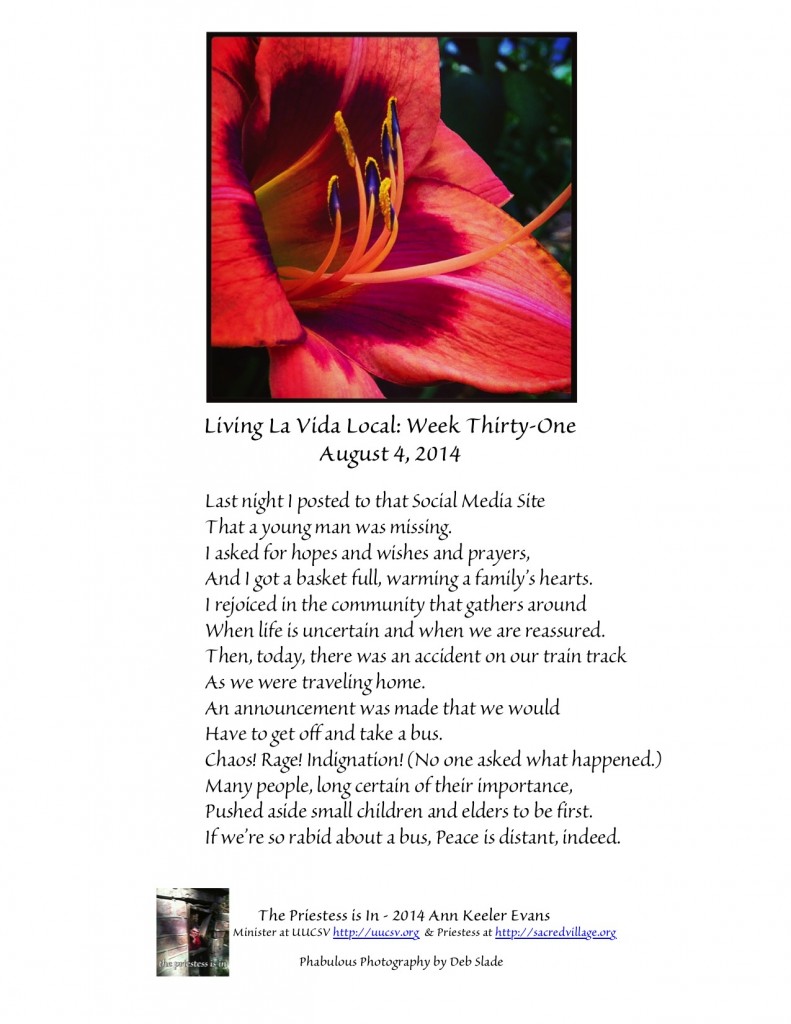