Oh, the forests are really mysterious here. Not in a creepy way, just mossy and green and beautiful, with big stones and fallen trees. It’s easy to imagine that the little people dwell amongst the rocks and roots. And there are lots of animals. We were just out at Kjell and Lorraine’s cottage, and in the surrounding forests there are elk, deer, foxes, and a rumored wolf or two. Birds for days. Pheasants and swallows and gulls. Across the way from where we swim is an island that an osprey has claimed and the county has acquiesced. “OK, that bunch of rocks is yours. No one can fish there!”

And the clear lakes are so beautiful. They’re connected to one another by canals so you could take your row boat or kayak or little motorboat all the way from here to Stockholm, but why would you, when it’s so beautiful here?

Lorraine fretted that we wouldn’t find a good place to go into the lake, after we waded through the grass to get to the edge, but there it was a little dip just big enough for three or four to sit with easy entry into the lake. Fifteen feet out and you’re floating and you can see your feet if you hang straight down, but not past that, and really, who wants to know? It was a little rocky to sit, so we scrounged around for little canvas stools to take (Lorraine has EVERYTHING squirreled away in her studio out there). Kjell decided it needed a permanent solution, so he “just knocked together” a beautiful bench to stand… They’ll be swimming there all summer…

But, fairy tales, isn’t that where we started? Sitting on the porch, looking at the woods (because we did a lot of that), I thought about how scary fairy tales are. We talked a little about that. What were they teaching? Was it that everything came out well in the end? Was it that you really should listen when your parents say, don’t do that because they can go so horribly astray?

But then I thought, ever the Pollyanna, despite Barbara Erenriech’s new “Bright-Siding,” that I’m slogging my way through, scaring myself at every turn. (Oh, don’t you hate to see where you’re shallow and oh, go ahead, wrong?)… I thought well, if things are so mucked about in the middle of fairy tales, but eventually get figured out, can’t we be the ones who figure things out?

And of course, can’t we be ones who figure things out without killing off folk? Because of course in fairy tales there’s only one bad guy/gal and you kill them and you’re all fixed… but when you’re working toward Peace, killing is a bit beside the point…

Lots of thoughts and all a fair distance from where there were first just the wee folk peering out at us. I’ll think again in a bit… it’s time to go out and walk around! 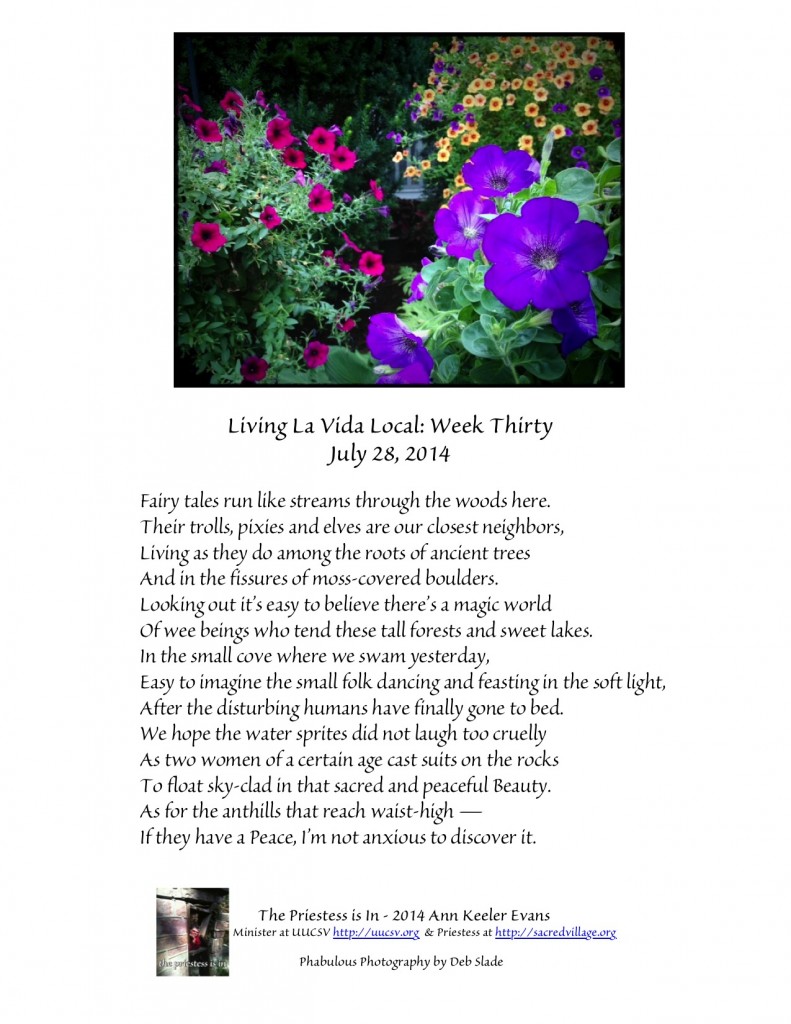